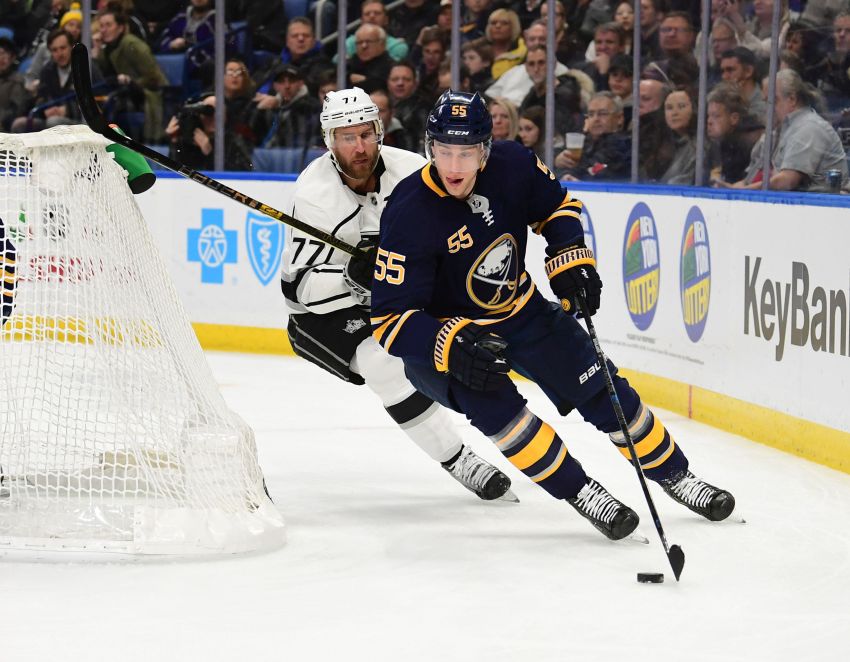 Remember when he torched superstar Brent Burns in November to extend the Sabres’ winning streak to 10 games? What about the time he took over a game in 2015-16 against the Calgary Flames, scoring a hat trick in just a 12-minute span?

Three years ago, the Finn appeared to be taking his first steps into stardom. The Sabres, a season removed from tanking, looked like a team on the upswing.

Fast forward to today, and Ristolainen, who compiled the NHL’s worst rating last season, a ghastly minus-41, could be on the trading block.

At this point, after six losing seasons, a change of scenery might benefit Ristolainen. The Sabres have finished dead last three times in his career. Ralph Krueger is already his fifth coach.

The constant losing Ristolainen has endured – the Sabres haven’t sniffed the playoffs – has clearly beaten him down.

Just watch an interview with him.

The Sabres, fresh off another ugly campaign, need to make significant changes. Ristolainen might be general manager Jason Botterill’s biggest trade chip this offseason, which kicks into high gear with the NHL Draft this weekend. The first round is tonight.

Of course, Botterill, might want to keep Ristolainen. They don’t exactly have a lot of defensemen on the roster or in the pipeline capable of handling his workload.

“When you’re in a build phase, you got to be careful with your assets and you just can’t move them for movement’s sake,” Weekes said.

Former Flames GM Craig Button, a TSN analyst, learned that firsthand when he worked for the Minnesota North Stars.

When Bobby Clarke took over as GM, he traded defenseman Larry Murphy, a future Hall of Famer, in 1990.

“A month later, we were looking for a player just like Larry Murphy,” Button said. “We finally found him when we traded for Sergei Zubov six years later.”

Botterill might also shy away from dishing Ristolainen a year after trading center Ryan O’Reilly to the St. Louis Blues, who just won the Stanley Cup.

So far, the deal ranks as one of the most lopsided in recent memory.

“Have the Buffalo Sabres not learned from the Ryan O’Reilly fiasco last summer?” Button asked.

The Sabres do, however, have the Blues’ first-rounder tonight, the 31st pick.

Make no mistake, while Ristolainen possesses some flaws, especially in his own zone, he is a very good defenseman. He has recorded four straight 40-point seasons.

But the upheaval and turmoil he has experienced likely stunted his development.

To Button, a change of scenery “doesn’t always have to mean an exit.”

“It can also mean helping a player there,” Button said. “I think that’s where you have to really spend time evaluating players before you move them out.”

Button used the Boston Bruins’ defense tandem of Torey Krug and Brandon Carlo as an example.

“Krug doesn’t have to do things he’s not capable of, and they’re comfortable knowing that their partner can pick up parts of their game that they can’t carry. The Buffalo Sabres haven’t done that with Rasmus.”

Two-time 50-goal scorer Jeremy Roenick, an NBC Sports analyst, said Ristolainen still hasn’t figured out what type of defenseman he wants to be.

“You’ve seen some of these goals he scored, and they’re amazing offensive rushes,” Roenick said. “But here we have a team that needs strong defensive guys. So what’s he going to be?”

He added: “I don’t think he realizes how good he can be. I think unfortunately he’s caught on a team that needs to be better structurally.”

Like many other observers, Roenick believes casting Ristolainen in a different role and trimming his minutes will help him.

“If I was a GM, I would assign him to a three, four defenseman in a New York minute,” Roenick said.

Perhaps Krueger will do that. His predecessors talked about lightening Ristolainen’s workload, yet they never followed through.

5 thoughts on “Rasmus Ristolainen might be Sabres’ biggest trade chip”