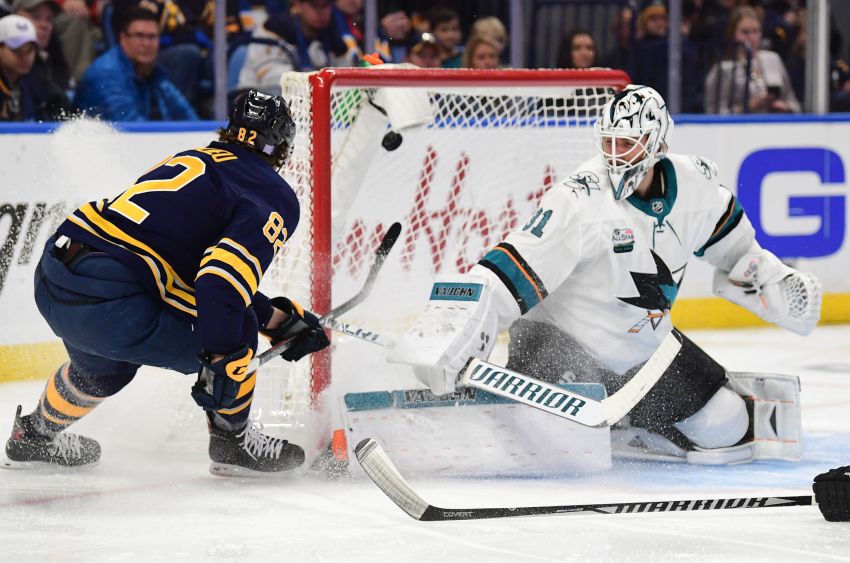 “It was one of the coolest goals I’ve ever seen,” Dahlin said after Jeff Skinner’s NHL-best 19th goal helped the Sabres tie the franchise record for most consecutive victories.

Almost 15 minutes into the second period, Ristolainen undressed former Norris Trophy winner Brent Burns down the left wing, switching from his forehand to his backhand before roofing a shot past San Jose Sharks goalie Martin Jones.

Then Ristolainen celebrated, well, a little oddly. The defenseman kind of stomped a little bit and twirled his stick.

Dahlin said the celebration looked “like a forward moonwalk.”

“I don’t know what he was doing,” Dahlin said.

Defenseman Nathan Beaulieu, who put the Sabres up 2-0 early in the third period before the Sharks roared back late, took it a step further.

“It was embarrassing,” Beaulieu joked. “It was awful. He ruined a beautiful goal.”

As you can tell, the players are having a lot of fun. The Sabres probably haven’t been this loose since 2009-10, the last time they won the division and enjoyed a strong start-to-finish season.

Right now, with 36 points, the Sabres rank first in the 31-team NHL.

“(The) last 10 games, when it’s a tight game, we feel confident,” said Ristolainen, who said he doesn’t plan his celebrations. “If we’re down, we don’t panic. We believe. We have the belief now.”

The Sabres’ rabid fan base clearly believes in this team. At first, locals were slow to get on board. Even as the Sabres started their unlikely march to first place, there were still thousands of empty seats inside KeyBank Center some nights.

But on Tuesday, the rink was packed to the capacity of 19,070. The crowd buzzed all night. By the third period, the fans loudly counted up to nine over and over again and demanded a 10th win.

“Like 10 times,” Dahlin said of how many times he heard chants. “We wanted that, too, so it was perfect.”

Their third period, however, was less than perfect. Unlike many of their recent efforts, the Sabres blew a late lead, letting Joe Pavelski score at 11:29 and again on the power play at 16:42.

Still, the Sabres were hardly out of their element. Incredibly, they have nine one-goal victories during their run. They thrive under pressure late in games or in overtime, where they’ve won four of the last 10 games.

“We have done it so many times we know how to do it,” Dahlin said of the Sabres’ play late in games. “Everyone has the feeling like we can’t lose and everyone goes forward and wants to win.”

Like so many other recent games, the Sabres attacked in overtime.

Skinner backhanded a shot by Jones at 1:41, becoming the first Sabre to score his second game-winning goal during the streak.

“Each night we sort of had guys step up and make key plays at big moment,” Skinner said.

Beaulieu said: “You look at the guys that have contributed throughout this whole thing, it’s been nine different goal scorers. … It’s a credit to everybody. Everybody’s contributing, everybody’s playing for one another.”

When the Sabres drafted Dahlin first overall, he knew he was joining a team fresh off finishing dead last in the NHL. The Sabres had been bad for five seasons.

“Now it’s not bad,” Dahlin said. “So, yeah, this is the best thing that can happen. I just try to bring myself in. It seems like everyone else wanted to change here, too. We want to change this together.”

Then Dahlin put his hands together to illustrate the Sabres’ tightness.

“We are like this right now,” Dahlin said. “I don’t know how to describe it. Everyone sticks together. We go out there and it’s a war. Everyone does everything they can to win.”

Goalie Carter Hutton made 36 saves for the Sabres, including several big ones.