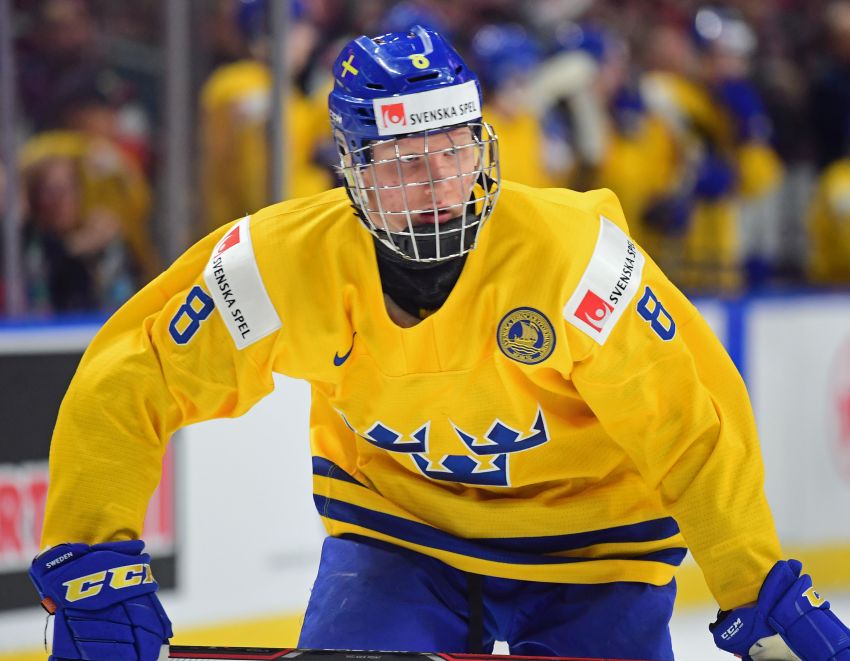 DALLAS – Brian Campbell noticed something unusual when he watched videos of Rasmus Dahlin, the ultra-talented defenseman the Buffalo Sabres plan to select first overall tonight at the NHL Draft.

Campbell, of course, knew Dahlin skated on the back end. Still, in the clips the former Sabres defenseman and NHL All-Star examined, the youngster moved so swiftly, created so much offense he looked liked his team’s top center.

Rest assured, Dahlin will be entrenched at defense for perhaps the next 15 or 20 years.

These days, a prospect’s talents often get overblown. A kid just starting out is talked about as the next coming of some star.

Well, Dahlin, 18, might actually live up to the immense amount of hype surrounding him. He earned the “generational” label experts have attached to him because, well, he really looks like the best defense prospect in decades.

“He’s going to be a phenomenal player,” Bourque told the Times Herald on Wednesday.

When the Sabres’ brass announces Dahlin as the top pick tonight inside American Airlines Center, a franchise beaten down by years of losing will have a defenseman destined to become perhaps the greatest in franchise history.

The Sabres have had some terrific ones over the years. Phil Housley, the team’s current coach, is a Hall of Famer who ranks fourth in NHL history in points among defensemen with 1,232. Mike Ramsey might be the most underappreciated player in franchise history. Bill Hajt, Jerry Korab and Jim Schoenfeld helped turn the Sabres into a powerhouse in the 1970s.

Campbell developed into one of the NHL’s best defensemen during his final seasons in Buffalo. Over his 17-year career, he compiled 504 points and won the Stanley Cup with the Chicago Blackhawks in 2010.

But when Campbell turned pro in 1999, he was raw and, like most youngsters back then, timid. It didn’t matter he had been perhaps junior hockey’s best defenseman. It would take him more than six years to earn regular duty with the Sabres.

“(Dahlin is) pretty much going to skip the whole prospect level,” Campbell said. “He’s going to go from a draft pick to a top-four defensemen in a men’s league, a No. 1 defenseman.”

Dahlin’s fearlessness starring for Team Sweden at the World Junior Championship six months ago in Buffalo – he was still just 17 – wowed Campbell.

“He was pretty much playing a guy one-on-one, going through his legs, making the kid look silly, where that won’t change when he gets to the NHL,” Campbell said.

In Campbell’s early days, even the best prospects wouldn’t have attempted any wild moves like Dahlin’s. Instead, they would play safely for fear of making a miscue.

“With (Dahlin), there’s not an ounce of intimidation, and it’s like that with a lot of young kids around the league now.”

That mindset has been encouraged over the last 10 years in Sweden, according to Hakan Andersson, the scout credited with helping the Detroit Red Wings draft legendary Swedish defenseman Nicklas Lidstrom in 1989.

The country has emphasized creativity instead of making, say, the safe, off-the-glass play.

“The emphasis is if you don’t give him the chance looking for an opening pass or carrying the puck, you just yell in his ear, ‘Shoot it off the glass, don’t take any chances,’ then you don’t let that creativity grow,” Andersson said. “I know … they are telling the coaches at a young age (to) let the kids try things, let them play, don’t be angry at them if they carry the puck and lose it.”

Lidstrom’s dynamic career likely inspired Karlsson and Hedman, who in turn made Dahlin dream of becoming an NHL defenseman.

Andersson sees characteristics of Lidstrom and Karlsson in Dahlin’s style.

“He’s unique,” Andersson said. “I think he has Erik Karlsson’s takeoff ability with the rush that maybe you didn’t see as much with Lidstrom. He’s got the physical game … really competitive. He’s got the same kind of reach that Lidstrom used to do. He doesn’t flip the puck off the boards very much. He finds a great first pass.

“You can take of some of those things from the different great players.”