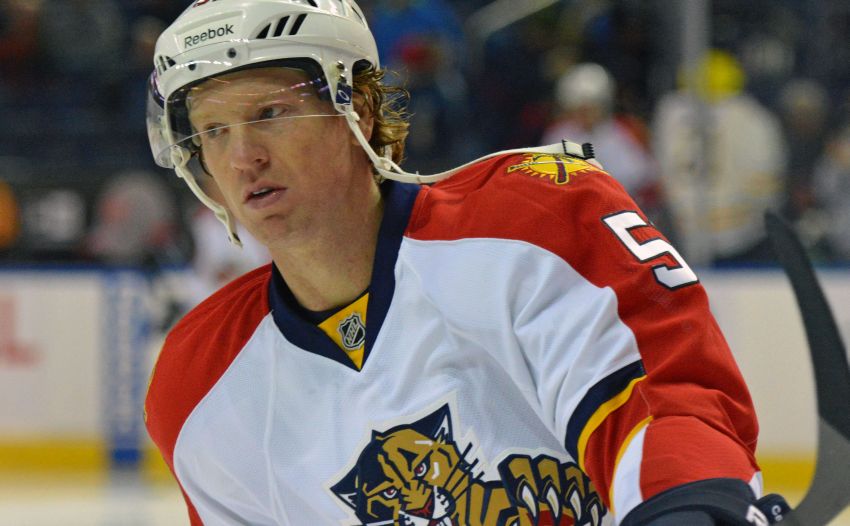 “No, no, no, no,” Campbell said Friday prior to the Panthers’ 2-0 win against the Sabres inside the First Niagara Center. “I’m not even top two. I’m third. I might even be later.”

“Louie, what month were you born in?” he asked.

Luongo replied he was born in April.

Indeed, Luongo, Willie Mitchell and Shawn Thornton are all older than Campbell.

“Nobody ever wants to hear, ‘You’re the oldest guy in here now,’” Campbell joked. “I’m fourth.”

If Campbell wants to feel old, he just needs to look to his right on the ice.

Campbell has quickly meshed with his defense partner Aaron Ekblad, the No. 1 pick in June. The 18-year-old was three years old when Campbell debuted with the Sabres in 1999.

“That doesn’t make me feel younger,” Campbell said about playing with someone 17 years his junior.

Ekblad’s maturity and poise has wowed Campbell, who needed six years to become one of the Sabres’ mainstays.

Earlier this season, Campbell said, he felt like he had “to watch over” Ekblad.

“Until I realized how good he was,” he said.

Campbell said Ekblad’s “not a true 18-year-old to me.” He skates more than 22 minutes a night and began Friday with five goals, 20 points and a plus-7 rating in 35 appearances.

“He’s playing like a veteran guy now,” Campbell said. “I think it was just a bit of an adjustment for me that way.”

Ekblad added: “He’s been a mentor and a role model to me, for sure.”

Campbell, meanwhile, is still one of the NHL’s smoothest skaters.

“I feel good,” said Campbell, who plays more than 23 minutes a game. “I’m having fun playing. I think that’s the main thing, as long as you enjoy playing. The body feels good. Obviously, you got to do a lot more to get prepared now, so it’s a little bit different. But the desire and everything’s still there.”

This is Campbell’s fourth season in Florida. His arrival in a trade with Chicago gave a hapless franchise credibility, and a veteran Panthers squad won the Southeast Division in 2011-12. But the Panthers bottomed out the next two seasons.

These days, they’re one of the NHL’s better young clubs. The Panthers began Friday 16-10-9.

“It’s been fun this year to be around this group and be in every game and contend,” Campbell said. “It’s a pretty close-knit group.”

Campbell doesn’t know how long he wants to play. He has one season left on the huge eight-year contract he signed with the Blackhawks in 2008. He doesn’t sound interested in playing until he’s 40.

“Playing 1,000 games is definitely something that I look at that I would love to get,” said Campbell, who played his 874th game Friday. “I think it would be a great honor just because I started in the league a little later than a lot of guys and had some good longevity that way. I know that’s attainable and reachable.”

A long career seemed like a pipe dream less than 10 years ago, when Campbell was a regular scratch with the Sabres. But he quickly became a star for those rollicking post-lockout teams.

Campbell still loves Buffalo and was happy to see all the construction and development downtown around the arena.

“Somebody was talking to me last night, said they always were afraid of doing stuff in this city … they were always like, ‘Oh no, it won’t work,’” Campbell said. “Now they’re just going and doing these great things.”

The Sabres have struggled without ace defenseman Tyler Myers, imploding late in several losses. They need the 24-year-old minute-muncher back badly.

When could Myers, who has missed six games with a lower-body injury, return?

“I’m pretty close,” he said Friday morning after skating. “I don’t know when I’ll be back. But it’s been better each and every day. I would assume it’s pretty close.”

Myers, out since Dec. 21, could return next week. The Sabres play tonight in New York against the Rangers and Tuesday in New Jersey. Myers plans to meet the Sabres there if he doesn’t leave with them.

He skated with his teammates Friday and alone Thursday.

“The last two days have been the best days,” Myers said. “If it progresses like this the way it has the last couple days, I expect to be back pretty soon.”

As injuries recently weakened his defense corps, Sabres coach Ted Nolan spread out the wealth a bit, breaking up Ristolainen, 20, and Nikita Zadorov, 19, arguably his best tandem. He put them back together Friday.

“Our defense corps was a little bit in disarray for a while, and those two were probably our two shining lights,” Nolan said.