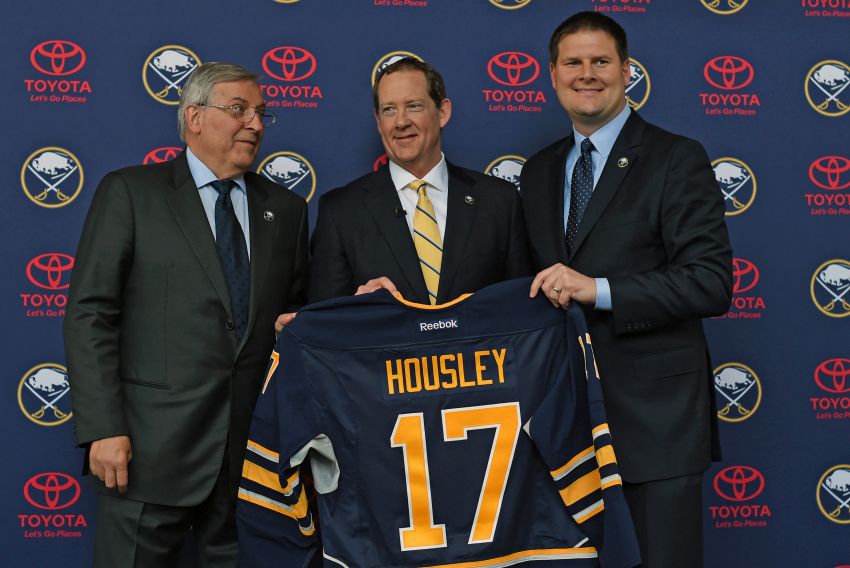 BUFFALO – On Thursday, Phil Housley’s 32nd wedding anniversary, he forgot to get his wife, Karin, a card. Sure enough, when the legendary Sabres defenseman returned to his room after meeting with general manager Jason Botterill, he noticed a card from her on the table.

Housley, however, never panicked. He had something better for their special day.

“I said, ‘I’m the new head coach of the Buffalo Sabres,” Housley said Thursday during his introductory news conference inside KeyBank Center. “I said, ‘Happy anniversary.’”

How many coaches can say they’ve celebrated an anniversary like that? Housley is the 18th coach in franchise history and the seventh former player to lead the Sabres. He replaced Dan Bylsma, who was fired with GM Tim Murray on April 20.

Housley, a Hall of Famer, couldn’t hide his excitement throughout his 25-minute chat with the media. Clearly, the Sabres, a team he joined as an 18-year-old in 1982-83 and spent eight seasons starring for, hold a special place in his heart with the city.

Housley, 53, has his work cut out for him. The Sabres haven’t made the playoffs since 2011, the NHL’s second-longest stretch. He has inherited a team that just finished last in the Atlantic Division, a distant 17 points out of a playoff spot.

Housley, of course, enjoyed an illustrious 21-year playing career, scoring 338 goals and 1,232 points with eight teams in 1,495 games. But he’s not coaching the Sabres because he’s one of the franchises all-time greats.

Housley paid his dues to reach the NHL again, first coaching at Stillwater High School in his native Minnesota and in the Team USA junior program.

“He has humbled himself by having the career he had in the National Hockey League and then coaching high school hockey,” Sabres owner Terry Pegula said.

When Housley moved up to the Nashville Predators in 2013, he helped develop their defense into perhaps the NHL’s best. In the process, Housley became arguably the league’s hottest assistant and head-coach-in-the-making.

As the Predators roared to the Stanley Cup final this spring, it appeared Housley would receive strong consideration for his first NHL head job.

Botterill, who was hired from the Pittsburgh Penguins on May 11, knew Housley a bit from their playing days. In 2000-01, they were briefly teammates – “A couple games and a training camp,” Botterill said – with the Calgary Flames.

“Phil’s extremely prepared for his meetings, detailed, goes about in a very concise way,” Botterill said. “Second is just his communication skills. Whether star players, up-and-coming defensemen, he’s found a way to interact with them … on a personal level. And thirdly, just his track record of development – whether it’s in high school, whether it’s in juniors, whether it’s the National Hockey League – he gets the most out of his players.”

One of Housley’s greatest challenges will be getting the best out of center Jack Eichel, his most talented player. Eichel never seemed to see eye-to-eye with Bylsma, and it probably cost Bylsma his job.

Naturally, Housley wants to establish a relationship with Eichel.

“P.K. Subban (Nashville defenseman) was a tremendous personality,” Housley said. “I think I can use that experience in trying to get to Jack. I think it’s about breeding a relationship and getting to know the player, what he’s about and what he brings to the team. He’s a terrific talent.”

He added: “It’s about creating relationships with those players. They got to know where you stand; you have to know where they stand. I think it’s a culture thing, too – build a foundation, set the standards.”

Eichel, who often lamented the Sabres sat back too much last season, should like the style Housley wants to showcase.

“I anticipate an attacking mindset, playing with speed, playing with pace, playing fast,” Housley said. “That includes a five-man attack. Our defense is going to be very involved in the play.”

The fans, Housley said, “are really going to like the brand of hockey here.” He learned about Buffalo’s passionate fans when he first arrived in town 35 years ago. Now, he would “like to try to get that passion back as a head coach.”

“People in Buffalo are very passionate about their team, and if they see an honest effort, they’re going to support you,” he said. “I just remember the crowds in the Aud, the fans in the rink high-fiving you after the game. It’s an exciting time for me … but I’m going to draw on those memories because it’s an exciting sports town.”