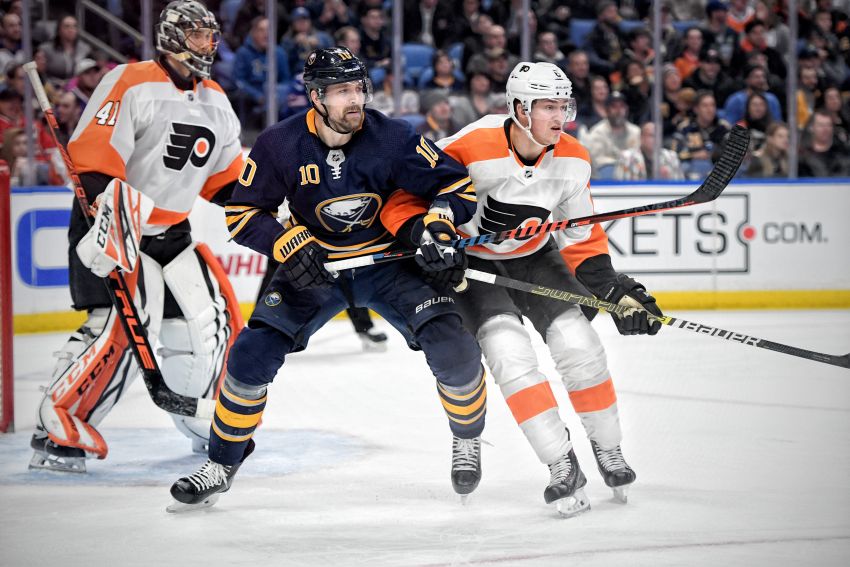 Patrik Berglund (10) left the Sabres after less than half a season. ©2018, Micheline Veluvolu

The Sabres placed Berglund, 30, on unconditional waivers Wednesday, four days after they suspended the 11-year veteran for failing to report to the team.

Berglund has three years left on his contract. The Swede will lose $12,579,032 from the termination, according to capfriendly.com. The Sabres are also free from his $2.235 salary cap hit this season and his $3.85 million yearly hit.

When asked if he was shocked Berglund essentially quit on the Sabres, coach Phil Housley refused to comment.

General manger Jason Botterill “has done a really good job along with our management of handling that,” Housley told reporters today in Washington.

A spokesman for the NHLPA had no comment. It isn’t known if the union will fight Berglund’s termination.

After the Tampa Bay Lightning terminated Jake Dotchin’s contract for “material breach” earlier this season – the team was reportedly unhappy with his conditioning – the NHLPA decided to grieve the difference between the defenseman’s new contract with the Anaheim Ducks.

In injury news, Housley said winger Jason Pominville, who left the ice woozy Tuesday after teammate Rasmus Ristolainen accidentally flattened him skating to the bench, is day-to-day. Housley did not say if Pominville is in concussion protocol.

Winger Scott Wilson also practiced with his teammates today, his first session since breaking his ankle late in training camp.

“I’m just feeling a little bit better every day, still a ways away,” Wilson said. “But just to be traveling and stuff and just being on the ice with all the guys in pretty nice.”

Wilson said he needs “at least a couple weeks” until he’s ready for game action.