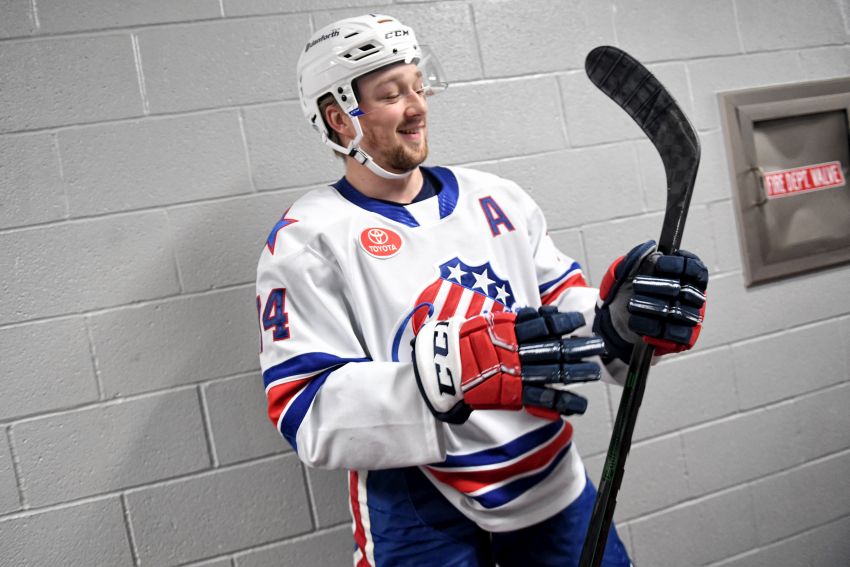 BUFFALO – Rasmus Asplund knows it will be difficult to keep his emotions in check today. Not only is the Sabres center set to make his NHL debut, it’s also Hockey Fights Cancer Night at KeyBank Center.

“Cancer is something that’s close to my heart,” Asplund said this morning after the Sabres prepared for the Ottawa Senators.

Both of Asplund’s grandparents on his father’s side passed away from cancer.

“It’s going to be hard,” said Asplund, who will replace injured center Johan Larsson. “It’ll be an emotional day for me and my whole family.”

Asplund, 21, said he visited his grandfather every day in the hospital for a month before the 2016 NHL Draft. After the Sabres selected Asplund 33rd overall in Buffalo, he returned home to Sweden see him.

“I went to the draft and got home and he passed away the day after I got home,” he said. “So he basically waited for me to get home from the draft and show the draft jersey and all that.”

Tonight’s game starts at 1:25 a.m in Sweden. Asplund, however, knows the late faceoff won’t be a problem for his parents.

“They will be awake,” he said. “I’m pretty sure it’s not going to be a problem for them.”

Sabres coach Ralph Krueger plans to utilize Asplund in Larsson’s spot between Zemgus Girgensons and Kyle Okposo and give him penalty-killing duty.

“It’s a big hole to fill, but we think Rasmus is more than ready for this opportunity,” Krueger said.

Krueger said Larsson is day-to-day with an upper-body injury.

Naturally, Asplund said he was experiencing “a lot of emotions going on in my body.”

“I’m happy, nervous and everything at the same time,” he said.

Asplund, who joined the Rochester Americans last season, has always been respectful of paying his dues. Reaching the NHL hasn’t changed his mindset.

“I’m just trying to keep my eyes on the goal, which is the NHL, and it’s still a process and I still have to respect the process because I’m not a regular NHL player yet,” he said.

Krueger said the Sabres haven’t given Asplund “a big to-do list.” He believes the similarities between the Sabres and Amerks can help the youngster adjust.

“The positive thing is (in) training camp, all the principles and concepts have been laid out for him,” Krueger said. “They’re working with the same language in Rochester. I’m seeing with (Curtis) Lazar and Asplund coming from Rochester the advantage of a very strong relationship in Rochester and Buffalo and how that simplifies the day for him.

“There’s not any major changes in breakouts, forechecks or principles of play, and that allows him to get ready to just play hockey.”

In other lineup news, goalie Linus Ullmark will start against the Senators, who have won four out of the last five contests. Meanwhile, defenseman Colin Miller will be a healthy scratch for the second straight game.