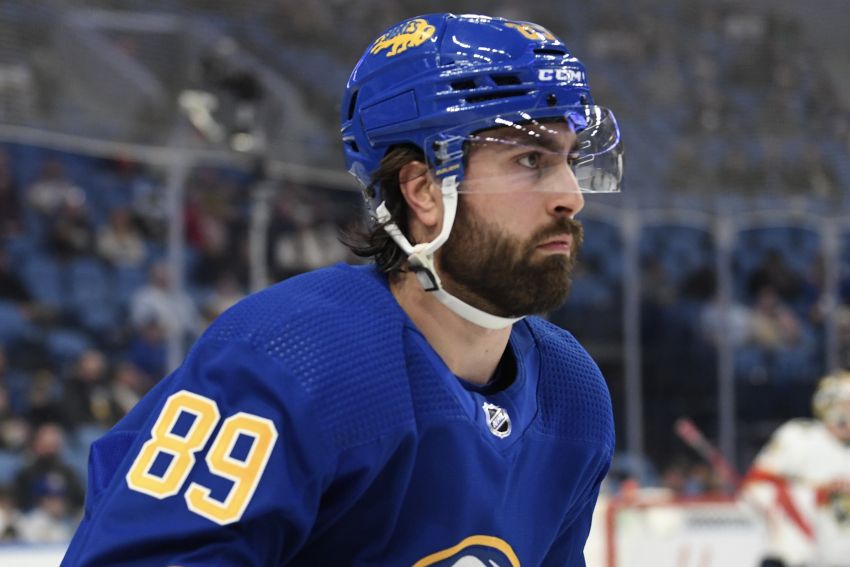 Alex Tuch grew up cheering for the Sabres. ©2022, Micheline Veluvolu

The Tuchs, proud Sabres fans from Baldwinsville, watched a lot of games together back in the day, and Jeanneret is a big deal to them.

“I told him that my dad was really jealous when I got to meet him one of my first games here,” Tuch said of Jeanneret, who was honored with a banner raising ceremony prior to Friday’s 4-3 win over the Nashville Predators at KeyBank Center. “He was like, ‘No, Alex, stop kidding with me.’ It was every game my dad and I would listen to RJ.

“We loved it, and honestly, when you think about watching the Sabres on TV, you think about Rick Jeanneret calling the game. And if you don’t, I’d call you a liar, because he’s an icon. It was countless memories. It was just a lot of fun over the years.”

On Jan. 15, Tuch thought he had scored his first goal at home with the Sabres. While it was called back, Tuch wanted to hear Jeanneret’s call of it.

“Just to hear his voice, say that I scored was pretty special,” Tuch said. “Someone sent me that video and I was like, ‘OK, I got to listen to this one,’ because I know it was RJ. Even though it got called back I still wanted to listen to it. So it was very special.”

Tuch believes Jeanneret’s ability to connect to the average fan makes him special.

“Going to NHL games is not something the average person can do on an everyday basis, and to be able to sit at home and watch and still find that enjoyment and see the passion and hear the passion that a guy like RJ has, I think it allowed people to connect to the Sabres at a really personal level,” Tuch said.

Sabres center prospect Arttu Ruotsalainen, who compiled eight goals and 18 points in 13 games with the Rochester Americans in March, has been named the AHL’s Player of the Month.

Ruotsalainen had scored 16 goals and 42 points in 44 games with Rochester this season entering Friday’s contest against the Cleveland Monsters.

The Finn made the Sabres out of training camp this season, playing 16 times before they sent him to the AHL.

How dynamically has Nashville’s captain performed? He recorded 28 points in March. Only two defensemen in NHL history – Bobby Orr and Paul Coffey – have registered that many in one calendar month.

From March 13 to 19, Josi compiled at least three points in four straight games. Orr is the only other defenseman to enjoy a streak that long.

The Sabres made one lineup change Friday, inserting defenseman Mattias Samuelsson, who missed last game with an undisclosed injury, for Will Butcher.

Winger Anders Bjork, a healthy scratch for the 13th straight game, and John Hayden, who recently returned to the team after leaving COVID-19 protocol, also did not play.