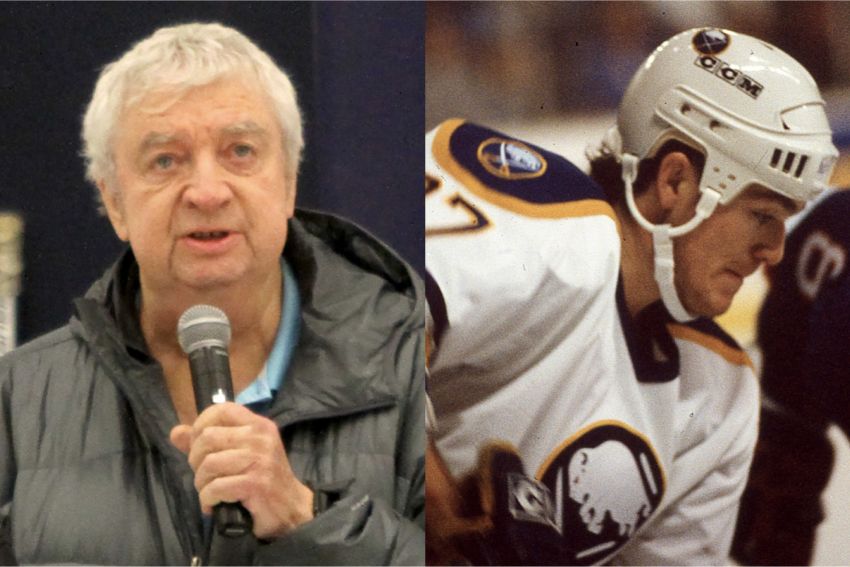 Rick Jeanneret and Brad May share a special moment in hockey. ©2022, Janet Schultz

BUFFALO – Brad May will be there tonight to celebrate his friend, Rick Jeanneret. The popular ex-Sabres winger is flying in from Belfast, Northern Ireland, where he was vacationing, for “RJ Night” at KeyBank Center.

“I need to be in Buffalo to feel it with him,” May told the Times Herald by phone Tuesday from Belfast.

The two men, May said, are “tied at the hip.” The goal of May’s life, his overtime series-clincher against the Boston Bruins on April 24, 1993, is also the most famous and enduring call of Jeanneret’s legendary 51-year play-by-play career in Buffalo.

A banner raising ceremony for the 79-year-old Jeanneret without May in the building would feel incomplete. Almost 29 years later, the call remains one of the most memorable in NHL history.

His words matched the magnitude of the moment.

“That one had legs,” Jeanneret, who will be retiring next month, told the Times Herald in his broadcast booth prior to Wednesday’s 3-2 shootout loss to the Winnipeg Jets.

Jeanneret’s call helped elevate May, a youngster known for his toughness, to a new level of celebrity and make him a household name in hockey.

“For one moment, the game stopped for me and celebrated me by playing Rick’s call,” May said. “And all of a sudden, I was Brad to most, whatever, ‘Maysie,’ or whatever my name was. Then the next day I was ‘May Day,’ and it’s never turned back.”

The 50-year-old said he was recently greeted with the nickname in France.

Despite sometimes having a coveted spot at left wing beside hockey’s most dynamic duo, 148-point center Pat LaFontaine and 76-goal right wing Alexander Mogilny, May couldn’t score as his second NHL season progressed.

On Feb. 17, 1993, May recorded his 13th and final goal of the regular season. Then he went quiet for more than two months.

So as Game 4 of the Adams Division semifinal went to overtime tied at 5 – the Sabres rallied from a three-goal, second-period deficit – May wasn’t expected to be a hero.

Early in the extra session, May said someone threw a fish or squid on the Aud ice surface. When he used his stick to help the crew dispose of it, he said “everyone was kind of giving the old ‘ew’ face.”

So May said he kissed his stick blade “to be a goof.”

“You know what? I believe in energy, I believe in karma,” he said. “I believe that you can will things to happen. I don’t know, maybe that set the ball in motion. Somebody else can say that I was just being an idiot, trying to get a laugh out of somebody.”

On his next shift, May scored his first goal in 66 days, cutting across the neutral zone to grab a falling LaFontaine’s pass and one-handing the puck to himself through Bourque’s legs. May then skated in alone, forced Andy Moog to lunge and beat the Bruins goalie at 4:48.

“He gets tripped up, gets it to May, in over the line, here’s May going in on goal, he shoots, he scores!” Jeanneret cried.

After a three-second pause as the Aud’s foghorn blared and a euphoric May skated down the ice and was mobbed by his teammates, Jeanneret broke into his “May Day” call.

It was just a spontaneous reaction to the goal he had just watched.

“The question that I get asked about that is, ‘How did you know to say something like that. Did you think that Brad May was going to score?’” said Jeanneret, who won’t be calling tonight’s game against the Nashville Predators. “I say, ‘He hadn’t scored in (28) games. I had no idea. I had no idea whatsoever.’”

May said he had practiced that goal route – skating across and trying to push off the defensemen – “many, many, many times.” Of course, he had little success with it.

“When I got the pass, I’d try to make moves in practice, and (coach) John Muckler would blow his whistle and yell at me, ‘It’s a one-on-one, get the puck deep!’” May said. “And I would try to do some, not silly move, but try to beat the defenseman, which never really happened.”

But May was young and reluctant to be told what to do. He wanted to push the envelope.

“There was no better time,” he said.

So after he received LaFontaine’s tape-to-tape saucer pass, he went right at Bourque, one of the greatest defensemen in history.

“Nobody seems to bring this up, even if they do remember it, is that May Day, he beat a pretty good defenseman, (Bourque),” Jeanneret said. “And the goaltender wasn’t bad, either, Andy Moog.”

Jeanneret ended his call by looking ahead to the Sabres’ second-round matchup against either the Montreal Canadiens or Quebec Nordiques. They ended up getting swept by Montreal.

“Brad May wins it in overtime!” Jeanneret exclaimed. “The Sabres bomb out onto the ice to mob Brad May. Buffalo sweeps the Bruins, 6-5 the final score. Next stop, la belle province! Oh, how do you spell second round?”

“The way he said that was just so eloquent,” he said.

May believes he most likely heard Jeanneret’s call when he woke up late the next morning following a night of revelry.

By then, it was spreading all over.

“Even a couple of days later, it was almost like it had just happened, in terms of where I went and people bringing it up to me,” Jeanneret said. “Like I said, it had legs. It’s been around for a long time, and it’s going to be, which is nice. I have no problem with that whatsoever.”

When people tease May, who won the Stanley Cup with the Anaheim Ducks in 2007, that Jeanneret made his career, he always reminds them that he, you know, scored the goal.

“We as players have incredible times with our team and we do great things,” said May, who played 18 NHL seasons. “Individually, we win games, lose games, whatever you do. But you have special moments. But not many guys have a defining moment, where I guarantee you the day I die, as my coffin’s being displayed whatever it is or wherever it is, they’ll play that call, there’s no question. The story’s already written.

“It would be the one moment of my life that was illustrated, and so beautifully for that moment. I think it’s tied with me forever, and that’s Rick Jeanneret, and I’m really proud – proud to be me and I’m proud of who he is.”