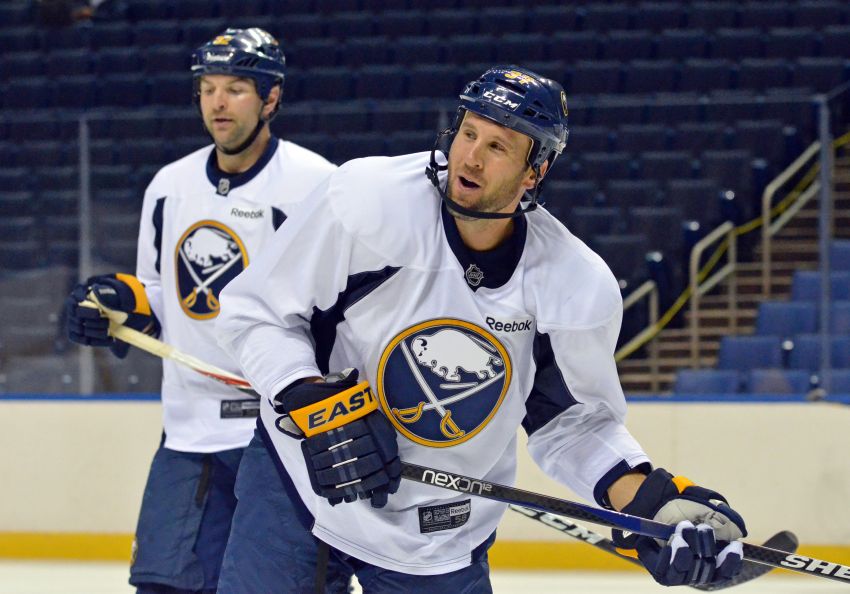 BUFFALO – This place, Matt Ellis said recently, is “where my heart is.” Five years ago this Tuesday, the Sabres claimed the forward from Los Angeles. As an injury fill-in, Ellis figured his stint could be short.

But the 32-year-old has stayed and carved out an important role with the organization, playing 197 NHL games and captaining two AHL affiliates.

In July, five months after the Sabres sent him to Rochester, Ellis re-signed for two more years.

“This is where I wanted to be,” Ellis, who cleared waivers last week and reported to the AHL, said earlier this month inside the First Niagara Center.

Ellis’ contract – he’ll receive $300,000 in the AHL, a huge sum – illustrates the Sabres’ respect for the hardworking veteran.

“It means there’s a lot of mutual respect between myself and the coaching staff, management and this organization as a whole,” Ellis said. “I think we have a good understanding on both sides of what the role is and what’s expected.”

Right now, that role is captaining the Americans, an honor coach Chadd Cassidy awarded Ellis late last season. The Sabres want their prospects learning from Ellis and taking his lead.

For Cassidy, a rookie coach who took over suddenly on Feb. 20 when Ron Rolston replaced Lindy Ruff in Buffalo, Ellis’ influence was huge. Cassidy said Ellis was like another staff member, someone the coaches could talk to and get a feel for the team.

“He can reinforce our message at the player level, which is really important,” Cassidy said.

“I think he got a lot of respect for that,” he said. “They kind of figured, ‘Well, if this guy go through what he just went through and he’s on board, he’s willing to do the right things, then we better do it as well.’”

Ellis played sparingly with the Sabres early in 2012-13, becoming a regular healthy scratch. But his 35-game AHL stint helped him showcase more aspects of his game, including his strong leadership skills.

“Being around the young guys and playing a leadership role there kind of gave me – I hate to say increase in value – kind of showed a different side of me, increased my importance to a certain degree with so many high-profile young guys coming up through the system that are going to be needed here in the short-term,” Ellis said. “I think it was a great fit for me.

“The leadership role’s always been there. I’ve worn the ‘C’ for a long time in the minors. But to go down, help build, help Chadd when Ron came up here for Lindy, I think it was a great fit for me. I think that’s one of the reasons why I’m back here.”

Ellis also captained Portland in 2010-11. That season helped him earn a two-year deal from the Sabres, and he stayed in the NHL until Feb. 10, when the Sabres waived him.

Still, despite losing his NHL spot, he re-signed with the Sabres before the market opened.

Ellis was hopeful he could earn an NHL spot out of camp. But early in the preseason it became clear the Sabres would be giving their youngsters long auditions.

“They gave me a pretty good look this year and I understand the role that I serve in this organization,” Ellis said last week. “It wasn’t a surprise when (general manager) Darcy (Regier) brought me in and I said I was placed on waivers for the purpose of coming to Rochester. I knew it was a possibility.”

Thanks to Olga Khmylev  for the quote help!