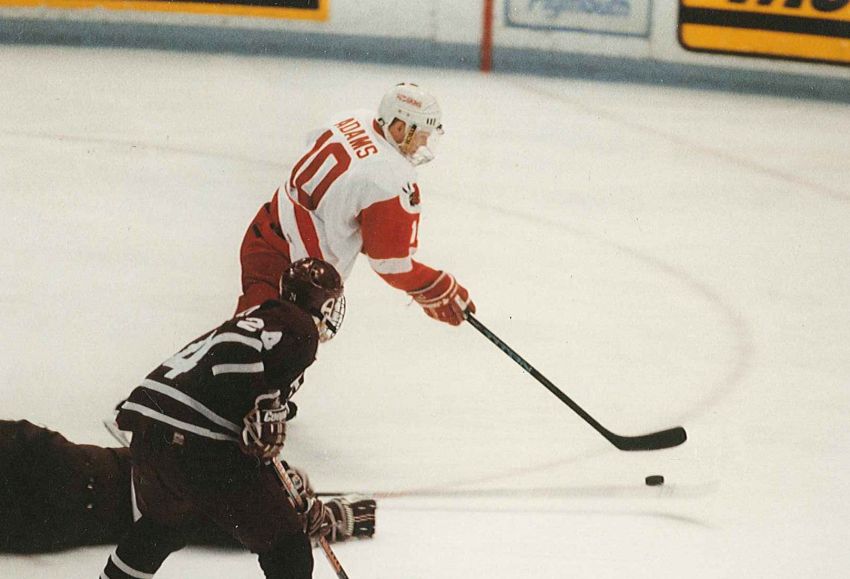 Kevyn Adams was a star at Miami. ©2020, Miami University Athletics

One by one, after listening to George Gwozdecky’s gut-wrenching address, the stunned players embraced their former coach inside Miami University’s dressing room.

At first, Gwozdecky had no intention of leaving the upstart program in Oxford, Ohio. When the University of Denver approached him following the 1993-94 season, he rebuffed them.

In five years under Gwozdecky, Miami had morphed from a doormat into one of the Central College Hockey Association’s elite teams, winning the conference in 1992-93 and making its first NCAA tournament appearance.

Just three years removed from a miserable three-win season, Miami had arrived on the national scene.

“The most memorable years of all my coaching career,” said Gwozdecky, whose leading scorer in 1993-94, Kevyn Adams, was named the Buffalo Sabres’ general manager June 16.

But Denver kept calling, and Gwozdecky finally relented and visited the campus. He figured it would simply be a free trip for his family.

“For a variety of reasons, it became the opportunity that I couldn’t turn down,” he said.

“One of the most difficult things I ever had to do,” said Gwozdecky, who would stay at Denver for 19 seasons and win the national championship in 2004 and 2005.

Gwozdecky became choked up as he addressed the players. After they had built the program together, he said he felt as if he was “abandoning” them.

“We had fought and sweated and cried, and I’m sure we shed some blood together,” he said. “In the short time that we were in Miami with that group, we’d become a really, really close family of coaches and players, because in the small world of college hockey, there were so many people who were non-believers in that Miami could be anything but a doormat, and yet this select group of young kids that we brought in believed in our plan.”

Adams, then a 19-year-old sophomore, was one of the last players to approach Gwozdecky following the meeting.

“He said, ‘Coach, I hate to see you go, but I completely understand your decision,’” Gwozdecky said.

Gwozdecky was stunned Adams, a first-round pick by the Boston Bruins in 1993, possessed the maturity to understand the difficult decision he had just made.

“I mean, I’m waiting for him to be angry, to be bitter, (say) ‘You jerk, you convinced me to come to Miami, and now you’re leaving?’” Gwozdecky said. “But he didn’t say that, he said, ‘Coach, as much as I love it here, as much as I’ve improved, as much as I’ve enjoyed everything here, if the Bruins decided that they wanted to sign me to a contract and be part of their organization, I would leave, because it would probably better my career.’”

“I left there feeling a lot better than I did coming into that meeting,” he said.

Adams, of course, would go on to enjoy a 10-year NHL career as a forward, playing 540 games and winning the Stanley Cup with the Carolina Hurricanes in 2006.

Today, the affable Adams, 45, has one of the toughest jobs in hockey, rebuilding the hapless Buffalo Sabres as a front office neophyte with a skeleton staff.

“He’s got all the qualities and characteristics of a strong leader,” said former NHL defenseman Todd Rohloff, Adams’ teammate at Miami. “I wouldn’t bet against him.”

The same qualities that helped endear Adams to Sabres owners Terry and Kim Pegula impressed Gwozdecky and others around the Miami program more than 25 years ago.

Gwozdecky said the Clarence native “was a sponge to learn.”

“He was … very talented but very humble, very eager to learn, very respectful toward his teammates and just a really good teammate,” he said.

The Pegulas have given a lot of different responsibilities to Adams over the last seven years, tabbing him to head the Academy of Hockey at Harborcenter and run the Jr. Sabres before promoting him to senior vice president of business administration.

Each job was a new adventure for Adams, who earned his MBA after he retired as a player in 2008.

“Kevyn is an exceptional person, he’s an exceptional communicator,” said Mark Mazzoleni, who replaced Gwozdecky as coach at Miami. “Hockey has been his life. He’s had a great number of varied experiences that I think are going to serve him very, very well, because he’s going to probably look at the decisions he has to make from a number of different perspectives.”

As a player, Mazzoleni said Adams was “an absolute coach’s dream.”

Just getting a youngster as talented as Adams to Miami was a huge victory. By the time Gwozdecky received a call from Adams’ junior coach with the Niagara Scenic, he was already being recruited by several schools, including Lake Superior State University, then one of college hockey’s powerhouses.

“We had very little of anything, but we made the best of what we had,” Gwozdecky said. “To me, all those kids bought in. … In that short few years that we had that group together, including Kevyn, it was magical, absolutely magical.”

The opportunity to be one of Miami’s top centers intrigued Adams. As a freshman, he scored 17 goals for the 27-win NCAA squad.

“He had a phenomenal freshman year for us and scored some huge goals for us, and yet he would always play off his accomplishments as if they weren’t that impressive,” Gwozdecky said.

Adams would lead Miami in scoring in his last three seasons. He’s tied for seventh in school history in goals (69) and fourth in points (172). He was inducted into Miami’s athletic hall of fame in 2011.

Gwozdecky couldn’t predict in the early 1990s Adams would be named an NHL GM someday, but he knew he had a bright future.

“There’s always certain personality traits that individuals have,” he said, “that kind of give you a clue as to where they might fit or what their future might hold.”