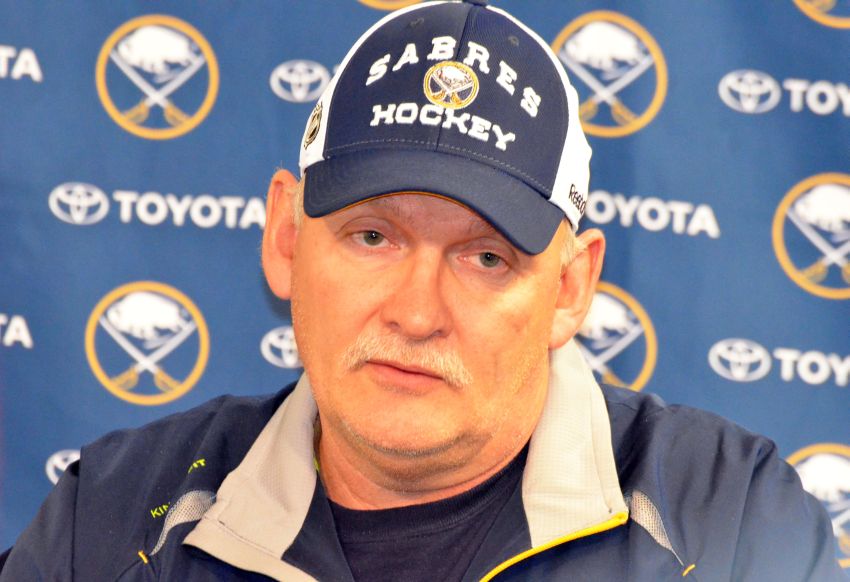 Ruff knew his 15 seasons as Sabres coach had ended.

“I saw him, I said, ‘I know,’” Ruff said this morning inside the First Niagara Center, his first comments since getting fired. “I said, ‘Don’t say you’re sorry.’ I said, ‘You’ve been my biggest backer all these years.’”

Ruff thanked a long list of people from ownership, to players and fans while speaking about 13 minutes and taking several questions.

The 53-year-old said he already misses coaching and plans to do it again. He will, however, keep living in Buffalo.

“I watched one period, and I found it incredibly strange,” Ruff said. “I turned it off. It was something I wanted to but I couldn’t.”

Ruff said his biggest disappointment was not winning a Stanley Cup for Sabres owner Terry Pegula and his wife, Kim.

Other highlights from Ruff’s talk:

“The fans of Western New York are No. 1. It really came to the forefront when my I dealt with my daughter’s medical condition, got us through a real tough time in our lives. There was a ‘Thank You’ outside on the fence. I’d like to put my ‘Thank You’ right next to it because it’s a special group. It’s a place I call home, always will call home. I don’t feel like I have anything to be ashamed of or any regrets. Western New York is where I’m going to live. I love Western New York.”

On his final game, a 2-1 loss to Winnipeg in which the home crowd booed the Sabres throughout a terrible effort:

“To take that step back against Winnipeg, it was like a kick in the gut for me.”

On the current group of players:

“To the players here now, they’re a united group. I know sometimes you think they’re divided. They’re a very united group. They’re in a place where they’re trying to support each other. It’s been hard. It’s been painful. They’re working hard at it. The leadership from Jason Pominville to Ryan Miller to Thomas Vanek on down, I know how they feel. I feel their pain at the same time. It’s hard right now. But I think better days are right around the corner. I owe a great big thanks to all those players.”

On Regier, his close friend:

“I know through 16 years there’s probably 99 percent of the GMs in the league would’ve whacked the coach at a certain time. We went through some tough stretches where he believed in me and said, ‘You can get these guys through it.’ He’s a good friend. He’s a great hockey man. We went through a lot together, and I’m indebted to him for trusting me in a lot of tough situations.”

On what he’s doing now: