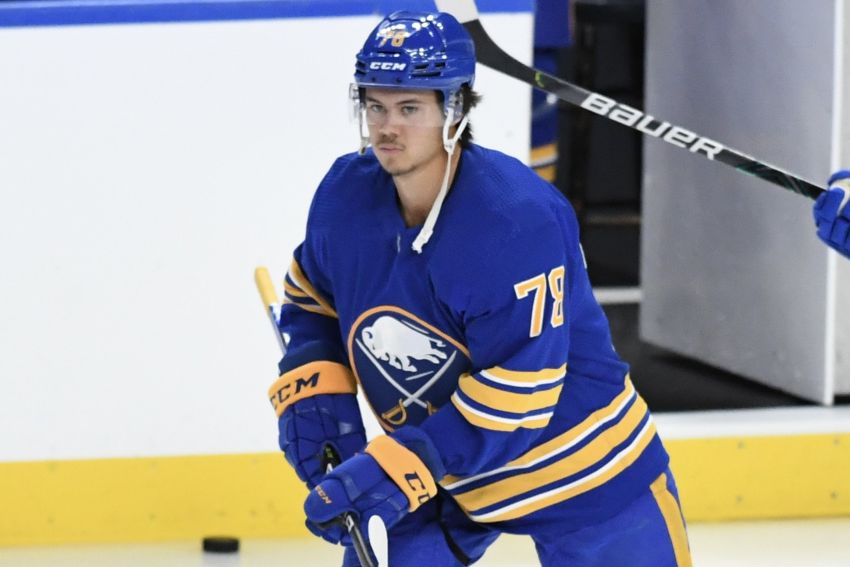 BUFFALO – Jacob Bryson’s Sabres teammates wanted to hear a joke from him last season, so he figured, what the heck, why not write a funny rap about some of them?

The defenseman took 30 minutes, typed some lyrics and returned with a “song” to perform for them.

“I would chirp basically anyone because they know I’m a nice guy,” a smiling Bryson said following Monday’s practice inside KeyBank Center.

Bryson, a rookie last season, said “all of the boys loved it.” He also told Sabres coach Don Granato and his staff about the rap and read it to them.

Bryson, 23, acclimated to the NHL quickly last season – off and on the ice. His willingness to rib his teammates – Ristolainen was his defense partner – illustrates how comfortable and confident he felt.

In a downright awful season, Bryson emerged as one of the Sabres’ biggest surprises, compiling one goal and nine points while averaging 19 minutes, 3 seconds of ice time in 38 games. His minus-1 rating ranked second among the team’s regulars. He also earned enough trust to kill penalties and play on the power play.

“He carried himself very mature, very confident even at the end of last year,” Granato said. “He was in the locker room ribbing Ristolainen last year and he made a funky tune out of him. He’s confident.”

Bryson will likely skate beside Colin Miller, his partner late in the preseason, in Thursday’s season opener against the Montreal Canadiens.

Some of Bryson’s comfort can be traced to the Sabres’ youthfulness. The roster is mostly comprised of 20-somethings. Every defenseman is under 30.

“We have such a younger team it’s a lot different,” he said. “You saw at the end of last year there was a lot of young guys on our roster and this year it’s pretty similar. I think it’s comfortable for a lot of us to be around guys that are all your same. And then our leaders and our older guys that we have, they’re great as well.”

But the Sabres traded one of their veterans, Ristolainen, to the Philadelphia Flyers during the summer. The versatile Finn offered a neophyte like Bryson, who loves to rush the puck, a safety net as a rookie.

“He was obviously a really good mentor, one of the best guys to play with,” Bryson said. “Off the ice, he’s a great person. On the ice, he was very reliable. I knew he was always back there. If I made a mistake, he was right there to help me out. I think that’s probably one of the best D-pairings you can have stepping into the league.

“This year, there’s a lot of guys that I’ve played with so far. I see similar aspects in guys like (Mark) Pysyk, new guys, (Robert) Hagg, they’re all good guys so far that I’ve met. We’ve got a big crew on the back end. I like playing with all of them, too. But playing with Risto was a lot of fun last year.”

Granato said he feels comfortable playing Bryson beside anyone. During the preseason, Bryson, a left-handed shot, even played on the right side for the first time.

“Brys learned a lot and is a fast learner,” Granato said. “He gained a lot of confidence quick and I’m comfortable with him outright on his own right now. I would have no problem putting another younger guy with him right now, even though he’s still learning. Just because he competes so well and he’s intelligent.”