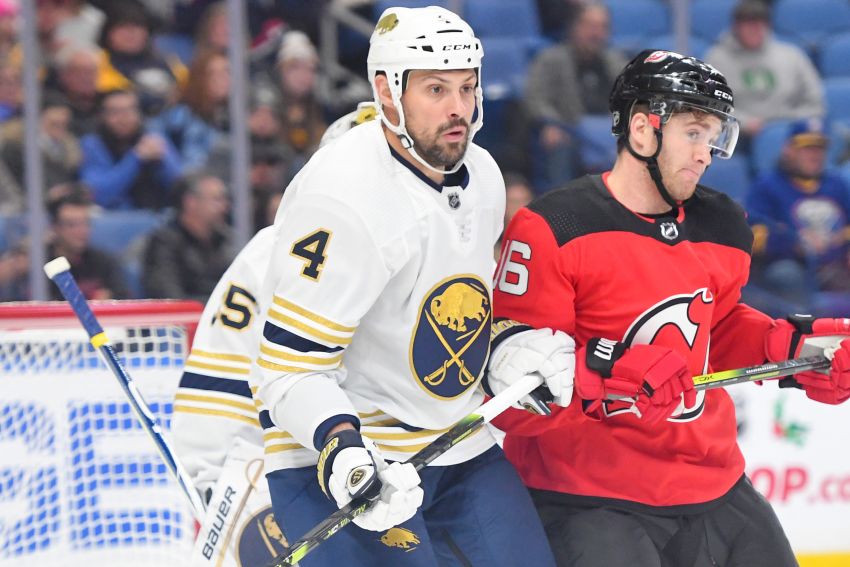 Zach Bogosian is in the final season of his contract. ©2020, Micheline Veluvolu

BUFFALO – Sabres captain Jack Eichel said he had to stop talking about defenseman Zach Bogosian before he became emotional.

“He’s somebody that I went to for just about anything in my life,” Eichel said shortly after Bogosian cleared waivers Saturday and the Sabres assigned him to the Rochester Americans. “He’s been there since I was a rookie.”

Now, Bogosian is gone. His Sabres career is likely over.

After morphing into a spare part – he was scratched 17 of the last 26 games– and often struggling during his sporadic appearances, the Sabres waived him Friday.

There is no official word if Bogosian will report to the AHL. He did not play in the Amerks’ road game Saturday against the Syracuse Crunch.

“What’s going on there is not really my issue,” said Krueger, whose Sabres host the Maple Leafs tonight at KeyBank Center. “My issue is to get ready to play Toronto.”

The Sabres can still trade Bogosian, who missed the first 22 games this season after undergoing offseason hip surgery and later suffering some setbacks.

Of course, given his salary – he’s in the final season of a seven-year, $36 million contract – and recent play, he could be tough deal, even if the Sabres absorb some money.

The Sabres could also loan Bogosian to another AHL team, a move they made two years ago when they sent graying winger Matt Moulson to the Ontario Reign, the Los Angeles Kings’ affiliate.

As Eichel spoke passionately about Bogosian, defenseman John Gilmour, who was recalled from Rochester earlier in the day, sat in his friend’s old locker several feet away.

Eichel said “there’s not many people in the world” he is closer to than Bogosian.

“I do have the organization and the team to thank for the relationship that I was able to create by being here with him,” he said. “I think my biggest message to him through this whole thing has just been the best part about all of it is … whenever the two of us are done playing, he’ll be a lifelong friend of mine. …

“We have a really special relationship.”

Injuries ravaged Bogosian over his five-year tenure with the Sabres, costing him a whopping 153 games following his arrival from the Winnipeg Jets. He underwent his first hip surgery in 2017-18.

The Massena native hasn’t cracked the 70-game mark in a season since 2010-11 and never made more than 65 appearances with the Sabres.

He last played in the Sabres’ 6-1 loss to the Colorado Avalanche on Feb. 4, a game in which he struggled.

“When you have surgeries like the ones that he’s had, it doesn’t happen overnight,” he said. “It’s something that takes a while. He’s been in here early every single day working out, trying to get himself back, trying to make him feel like he did before, and I think all the guys on the team recognized that.

“He’s just somebody that you honestly enjoy coming to the rink and seeing every day. He brings a tremendous energy.”

One scout who has watched Bogosian regularly throughout his career, including this season, said constantly being injured has taken its toll on the 12-year veteran. The former third overall pick has also tried to live up to the expectations his contract brought.

The scout said Bogosian “can be a strong defender” who keeps opponents “honest and somewhat on their toes,” moves the puck well and kills penalties efficiently.

“He is a guy if healthy can play in a third pairing and be near the top of the list in hits and blocked shots if playing the way he needs to,” he said.