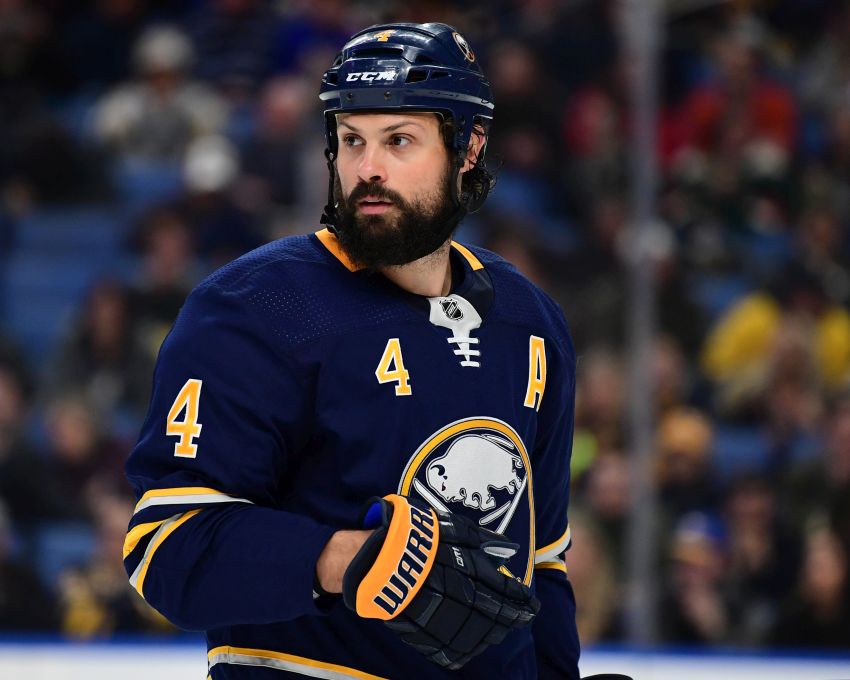 Zach Bogosian has had both his hips repaired. ©2019, Hickling Images

BUFFALO – Zach Bogosian couldn’t find the words to describe what he has experienced recovering from his second hip surgery.

Injuries have ravaged the Sabres defenseman throughout his five years here, costing him a whopping 148 games.

After undergoing surgery in April – Bogosian had his other hip repaired in early 2018 – he endured setbacks. A recovery expected to take about five or six months has lasted around eight.

“It’s really been a learning experience,” Bogosian said of his recovery. “I found out a lot about myself. It’s … kind of tough to put into words how it feels to go through something like that unless you’ve been through it.

Those people – Bogosian’s support system – mean everything to him.

“It starts with, you know, my family,” a choked-up Bogosian said. “Yeah, it’s my family. I’ll leave it at that.”

Bogosian sounded emotional and excited Wednesday. He has no timetable for a return. Officially, he’s listed as week-to-week, meaning he’s out for tonight’s home game against the Carolina Hurricanes.

The move looked better suited for a game.

“It was just the way the drill was going,” a smiling Bogosian said. “It was either that or he was going to go by me. That’s probably six, seven months of built-up excitement.”

Looking back, Bogosian knows he probably should’ve had both hips repaired at the same time.

Right now, the Massena native is essentially going through his own training camp. He has stayed close to the Sabres, who have lost five straight games (0-4-1), participating in team meetings.

He did, however, remain in Buffalo to train during the team’s two-game trip to Sweden last week.

“He just has to get comfortable with what we’re doing,” Sabres coach Ralph Krueger said. “The good thing is Bogo’s been in on every single meeting that had any tactical or strategic element to it since the 13th of September. …

“He’s been involved the whole time, so he understands what we’re looking at and what we’re trying to do and I think he’ll be able to re-enter … quite quickly.”

Bogosian said Wednesday’s practice had been circled on his calendar since last week. He said he might’ve been able to practice a week ago if the Sabres hadn’t been overseas.

“It’s been a long journey, but it was great to be out there with the guys and have that camaraderie,” Bogosian said. “(It) is something I live for, I cherish. It was a lot of fun to be out there.”

Sabres winger Kyle Okposo said: “You get a player, a person like that in your lineup or just at practice, just to be around the guys, it’s huge, and I know that he’s had a long road. I know how difficult it was for him to get back to that point.”

Bogosian and Marco Scandella’s return Wednesday means the Sabres have nine defensemen. That depth, of course, is an asset. Still, that number is too high.

In the near future, the Sabres might make a move or two.

“It’s definitely complex,” Krueger said. “I’ve been a coach in my life that I wake up in the morning and look at who is there and who’s healthy, who can play, and then deal with it, then the next day and the next day because you never know what this pace of games will bring us.

“We’re happier to have that competition, internal competition, and the depth in the roster because all of us know in this grind coming up, we’re going to need it. At the moment, it’s not an issue yet.”