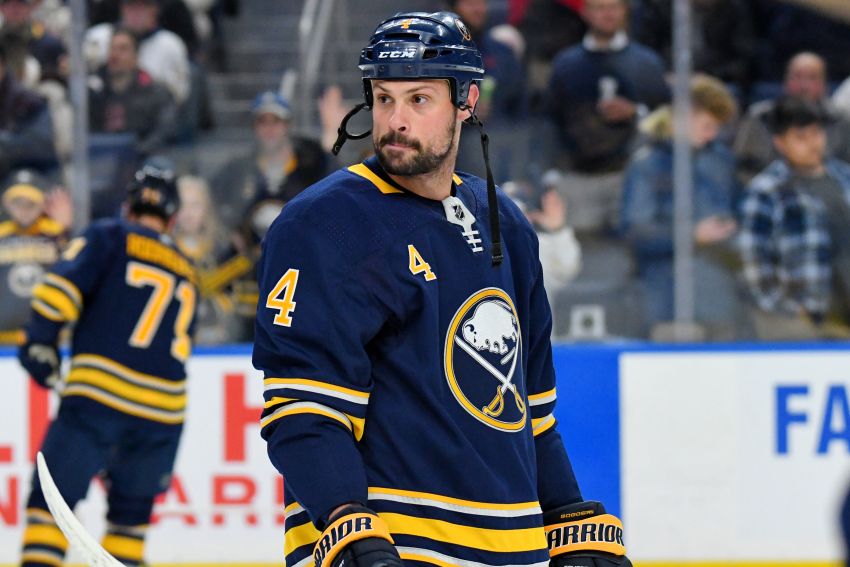 For two and a half minutes Friday, the Sabres defenseman answered questions about his uncertain future with terse replies. The normally affable veteran was expressionless.

In his 12-year NHL career, Bogosian had never experienced sitting out a game as a healthy scratch.

Then on Thursday, coach Ralph Krueger, who has eight healthy defensemen on his roster, benched Bogosian for the Sabres’ 4-3 win over the Nashville Predators.

“Any conversation between myself, Jason (Botterill) and my agent stays (with) me personally,” Bogosian said inside KeyBank Center.

He added: “I’m going to let everything stay in house.”

The oft-injured Bogosian, a proud veteran who was an alternate captain before this season, mostly said he’s “focused on getting back in the lineup.”

“There’s not much I can do other than just work hard and show up and put a smile on my face like I always do,” he said.

But based on the defense pairs the Sabres used Friday inside HarborCenter, Bogosian could sit out this afternoon’s road game against the New York Islanders.

Bogosian practiced beside Rasmus Dahlin, who dressed as the seventh defenseman Thursday. Krueger wouldn’t say if Bogosian would be scratched again.

The Sabres’ defense depth has forced Krueger to make some tough decisions recently. In addition to Bogosian, defensemen Jake McCabe, Colin Miller and Marco Scandella have also been scratched.

McCabe is an alternate captain. Miller, a big contributor to the Vegas Golden Knights’ success for two seasons, sat out seven of 14 games. Scandella is a 10-year veteran.

None of them complained publicly about sitting out.

“I’m a leader that’s not here to be popular at all, doesn’t interest me on the day at all,” said Krueger, who was hired in May. “The past is not the present, it is the past. And we will work with the present, and what you’re doing today and giving the team today will decide where your role is, what your minutes are and how much you are playing a part in our process.

“That’ll be decided today, and it’s not that I’m cold. I’m doing what I know I need to do as a leader to get the most of this group and find the potential of the Buffalo Sabres.”

But missing so much time has clearly hurt him.

“Bogosian didn’t have a training camp, he didn’t have the luxury of trying out his role and his position into being the best player he can be,” Krueger said. “I believe we still haven’t seen the best Zach Bogosian, and my job is to find the best Zach Bogosian for our team, so we’ll continue to do that, and after 10 games for him to slip a bit after such a long break and then need some breathing time to take another step up, that opportunity’s there.”

Bogosian said he has never played for a team that has had eight defensemen this long.

Sooner or later, the Sabres might need to deal one. Even if they dress an extra defender, an established one must sit out.

While no one has complained publicly, the players getting scratched can’t be happy.

“I have no fear or no sleepless nights because of minor conflict within the group,” Krueger said. “What we need to do is react to them. Our character is tested in conflict and our personality actually grows and develops in these kinds of situations.

Bogosian is in the final year of a contract that pays him $6 million this season. It’s unclear given his injury history and high salary how much interest there could be in him. He can become an unrestricted free agent following the season.

“You play your whole life and you grow up and you just love and you just want to play, and all of a sudden you get to the NHL and you think it’s going be the same and it’s not,” Okposo said. “That’s just reality. … Guys have to make decisions.”

Bogosian has compiled 52 goals, 192 points and 553 penalty minutes in 627 career games. He has never played an NHL playoff game.