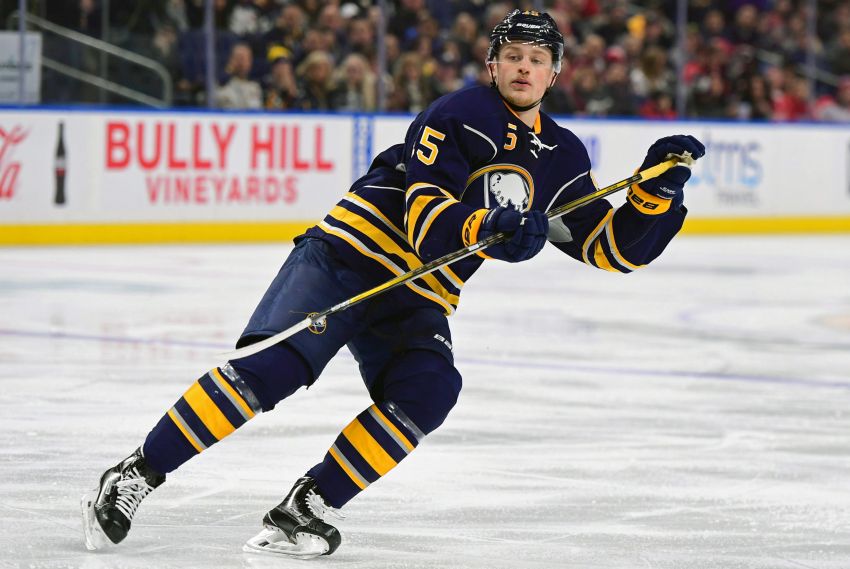 BUFFALO – Jack Eichel wouldn’t go on his own. So when the Sabres convened for their post-practice stretch at center ice, veteran Jason Pominville nudged the young star into the circle.

The scene inside HarborCenter was fitting. Eichel, in his first skate since signing an eight-year, $80 million contract extension Tuesday, surrounded by his teammates, leading them in the stretch.

Eichel, 20, has been the face of the franchise for two years. But thanks to his mammoth new deal, the largest in team history, the slick center is expected to be the Sabres’ undisputed leader.

The Sabres, who open the season tonight at KeyBank Center, are Eichel’s team now and at least through 2025-26.

“He should be there (leading),” Pominville said Wednesday after the Sabres prepared for the Montreal Canadiens. “I think everybody was kind of telling him to go in there … just give him a push to go in there. I think it’s important.”

Sure, Eichel might’ve reluctantly gone into the circle, but after two seasons, he wants more responsibilities. The former second overall pick wants to be the guy.

“With or without a contract, that was my goal coming into camp, be a leader, be a guy that people can rely on and try to push our team and the organization to the next level,” Eichel said during a news conference to discuss his extension. “I want to be that person. I want to take on more responsibilities.”

While Eichel said late in the summer he was willing to play the final season of his entry-level contract without a new deal, he and the Sabres seem relieved it’s finally done.

“It’s huge for the city, himself, the team,” Pominville said. “He can just worry about playing.”

“Is there some weight off his shoulders? I think so,” Housley said. “I think he can really focus on his game right now moving forward.”

He added: “He handled it quite well. I’m just speaking on experience being in his position, playing under those circumstances. It’s always in the back of your mind.”

Eichel, of course, acknowledged he will be earning a lot. But more than money convinced him to make the longest commitment he could under the collective bargaining agreement.

“It was pretty obvious both sides wanted eight years,” Eichel said. “I told my agents I wanted to be here for as long as I could.”

Since arriving in town just over two years ago, Eichel has consistently talked about his appreciation for the city, its people and the support the organization has given him.

Naturally, the pressure on Eichel will be immense. When the contract kicks in for the 2018-19 season, his yearly average will be higher than some of the NHL’s biggest names, including Sidney Crosby and Alex Ovechkin.

Housley said he saw “a spirited young man” practicing Wednesday. Living up to the contract, he said, won’t be a burden for Eichel, who has 48 goals and 113 points in 142 NHL appearances.

“He’s just got to go about his business,” Housley said. “We got to try to put him in positions to succeed. I just want him to come to the rink and enjoy himself.”

The Sabres started talking to Eichel’s agents in the summer, general manager Jason Botterill said. Talks then heated up during camp.

With the deal done, Eichel’s first order of business might be treating his teammates to a lavish dinner.

“I can’t wait for this dinner,” Pominville said.

Eichel has already been on a few team dinners.

“They’re usually not too modest with their orders,” he said.