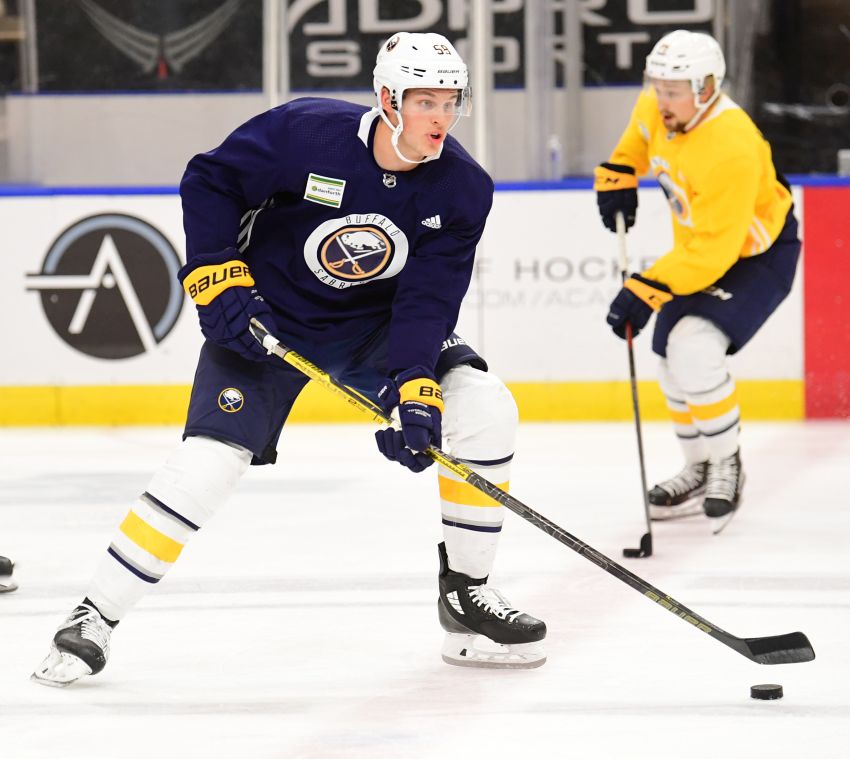 Griffin Luce will be a junior in college. ©2018, Hickling Images

BUFFALO – For defenseman Griffin Luce, the proud grandson of a Sabres legend and a fan of the team growing up, wearing Blue and Gold for four days last week was a special experience.

Luce, 20, attended other NHL development camps earlier in his career. But participating in the Sabres’ camp with his grandfather, Don, watching from the HarborCenter stands, had extra meaning for the University of Michigan defenseman.

Don Luce, of course, is one of the most popular players in Sabres history and a member of the team’s hall of fame. Following his playing career, he spent more than 20 years in the front office.

“My grandfather’s connection to this program here was amazing,” Griffin Luce said Friday. “Growing up, I got to watch them as a kid. They had my favorite players growing up. I think it’s just a tremendous honor to be able to represent this team, this program this week and it’s an honor to put on that jersey.”

Sporting an NHL jersey – Luce also attended development camps with the New York Rangers and Colorado Avalanche – isn’t something he takes for granted. In 2016, NHL teams passed over Luce, a projected mid- or late-round pick, completely at the draft held inside KeyBank Center.

Instead of sulking, Luce said he has tried to use the snubs as a “motivational tool.”

“In the end, it doesn’t really matter if you get your name called that day,” he said. “I mean, every kid dreams of it happening. But at the end of the day, it’s what you do after that. Everyone says, ‘Well, you name was called, now the work starts.’ I think I took that as a little bit of motivation for me, use it every day.

“It’s always in back of my mind thinking, well, I want to prove people wrong, prove to people I should’ve been picked that day.”

Having scored only two goals and six points through his first 61 NCAA games, Luce isn’t known for producing offense. Defense is his greatest asset.

Still, he believes he has evolved over the years.

“You see where the game’s going now, it’s a little more speed game, transitional,” he said. “There’s a lot more offense in the game now. But I think that the guys that are shutdown guys now are utilized as well. I think for me, I take pride in my shutdown role.

The next steps will come in the fall, when Luce begins his junior season. The Wolverines’ captain for 2018-19 is Youngstown native Joe Cecconi, a senior defenseman.

“He’s a vocal guy, he’s a guy you can approach and … he’ll be hard on you if he needs to be,” said Luce, who plans to live with Cecconi. “But he’s always an approachable guy and he’s easygoing. So I think he leads by example with the way he works, too – on and off the ice.

“I know if there’s ever a big play that he needs to make, he’s going to be the one to make that play. He’s just a really good character guy for the guys in the locker room.”

Goalie Robin Lehner, who wasn’t tendered an offer by the Sabres as a restricted free agent, signed a one-year, $1.5 million contract with the New York Islanders on Tuesday.

Lehner, 27, spent three seasons with the Sabres. He made $4 million last season.

Blackwell, 25, scored 17 goals and 45 points in 61 games for the AHL club after beginning the season on a tryout.

Forward Seth Griffith, who played 21 contests with the Sabres last season, signed a one-year, one-way deal with the Winnipeg Jets on Sunday.