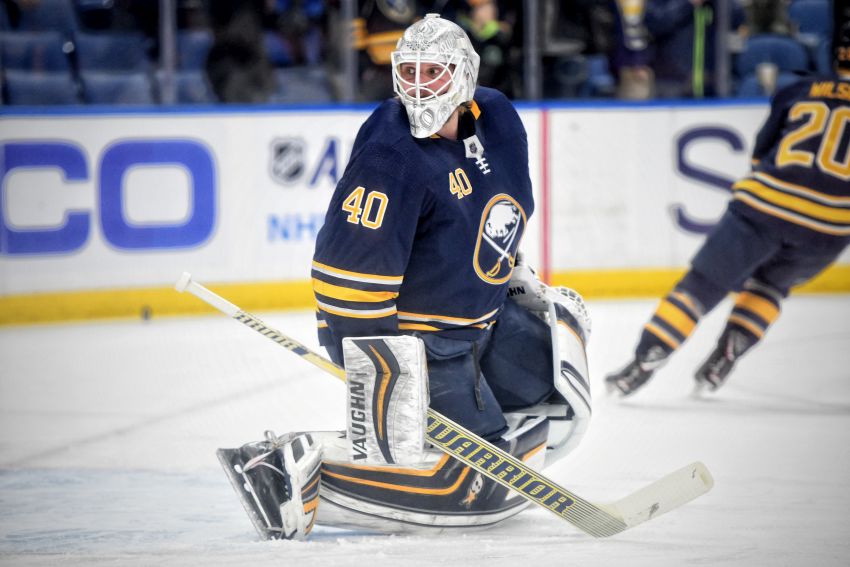 BUFFALO – After getting yanked for the third time in five starts, Sabres goalie Robin Lehner skated to the bench, sat down and … left his mask on.

It looked, well, a bit odd.

Lehner kept wearing the protection until the second period ended Saturday afternoon. When he sat down again for the final 20 minutes of an ugly 7-1 loss to the Dallas Stars, he had finally removed it.

“I didn’t feel like taking it off,” Lehner said Sunday inside KeyBank Center. “I was (ticked) off, it (stinks), the situation (stinks). It’s embarrassing, I’m embarrassed.”

Right now, the reeling Sabres are a mess, tied for the NHL’s worst with 11 wins and 31 points, pathetic numbers they share with the Arizona Coyotes.

The Sabres have lost two straight games and seven of the last eight (1-6-1) entering tonight’s tilt against the Calgary Flames, the start of a three-game road trip.

Lehner, 26, has often been the Sabres’ backbone and lone bright spot, earning 10 of their victories. Still, he hasn’t won since Dec. 29.

In his last five games, he has allowed 19 goals and has an awful .833 save percentage.

Lehner can be blunt. Over the past three seasons, he has been unafraid to criticize the Sabres’ poor play, always making sure to include himself.

But Lehner has become a lightning rod for criticism, often getting blamed for many of the Sabres’ woes by the team’s frustrated fan base, which is still upset former general manager Tim Murray traded a first-round draft pick for him in 2015.

Forget that Lehner has regularly been hung out to dry by perhaps the NHL’s worst defense corps for two seasons. Never mind the Swede compiled a terrific .920 save percentage last season facing a barrage of shots.

For many fans, any gaffe or bad goal allowed by Lehner is seared in their memory.

But Lehner knows the goal Matthias Janmark scored from left circle 6:25 into the second period was weak.

“It was a pretty bad game from all of us yesterday,” Lehner said. “It’s tough when you get these starts. The puck’s getting a little smaller. Obviously, the third goal yesterday, I want it back.

“We have a lot of things we need to figure out, and that’s me included. I’m not trying to pinpoint anything specific in my game. We need to figure some stuff out, all of us. I need to tighten up, I need to play better, too. But this is mentally tough.”

He added: “There was three other goals. I’m doing my best to scramble around and get it, but it’s just not … going our way right now and we’re not doing enough.”

Despite the Sabres’ sorry state, Lehner has quietly morphed into one of the league’s best home goalies this season. Even after getting pulled in two straight starts, he has some strong numbers – 5-8-2, a 2.37 goals-against average and a .925 save percentage – in 17 games.

Saturday’s feeble effort, a game the Stars outworked the Sabres in every facet, incensed coach Phil Housley, who skated his team hard Sunday inside HarborCenter.

“We don’t deserve anything else,” Lehner said of the session. “It’s frustrating for a lot of people, because we have a structure in place, we have a game plan in place and we’re just not doing it. So we got to practice until we learn.”

Wilson, a December acquisition, won a Stanley Cup with the Pittsburgh Penguins last season, so he has a unique perspective.

“I’m not the most vocal guy, but I try to get guys to understand it’s about the little things that you gain your confidence through,” Wilson said. “I think this group is lacking confidence and a good way to build it is, I think, just doing the little things on the ice – finishing your checks and making the smart little plays.

“Once everybody gets on the same page with that, things will start rolling.”

Meanwhile, winger Nick Baptiste, a healthy scratch Saturday after getting recalled, practiced on a line, possibly pushing Benoit Pouliot out of the lineup.