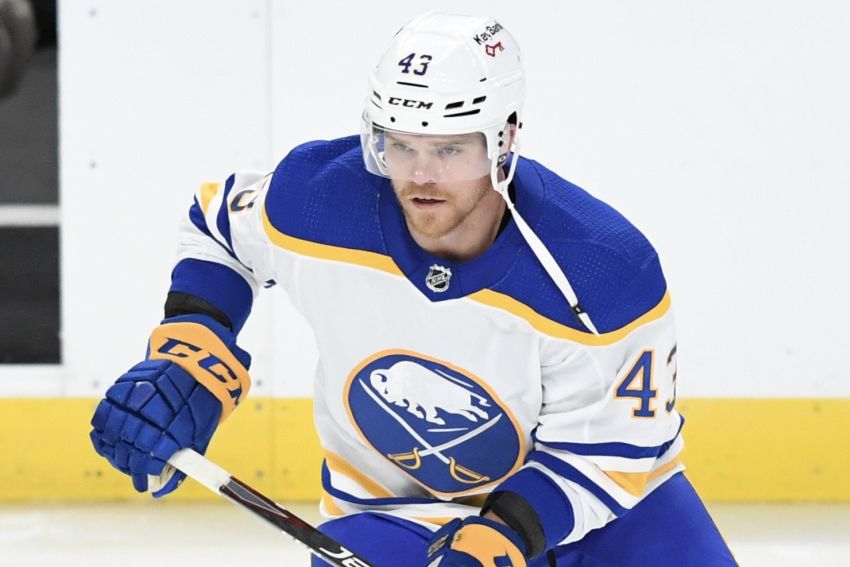 BUFFALO – At times last season, center Sean Malone said coach Seth Appert would pull him aside and tell him, “You’re right there.”

In his return to the Sabres organization, the West Seneca native quickly seized a leading role in Rochester, developing into arguably the Americans’ most versatile presence.

Malone had become what he called a “bubble guy,” offering valuable depth. Sooner or later, a recall to the Sabres seemed inevitable.

“And then I have surgery,” Malone said following Thursday’s session of training camp at KeyBank Center.

In mid-January, shortly after COVID-19 sidelined him, Malone underwent surgery to repair a lower-body injury and missed 30 games.

If Malone, 27, had remained healthy, he likely would’ve earned action with the Sabres early in the winter as they battled COVID- and injury-related absences.

“We talked a lot about recalling him when injuries were an issue in those discussions,” Sabres coach Don Granato said.

While the injury cost him perhaps the best opportunity of his career, Malone said he refuses to feel sorry for himself.

“I just want to be the best player I can be and be a leader for those guys down in Rochester and hopefully continue with the same success, advance my game and hopefully be here soon,” said Malone, who played one game for the Sabres after leaving Harvard in 2016-17 and another for the Nashville Predators in 2020-21.

Malone’s lower-body injury recently wreaked havoc again. In August, he said he had a procedure done to fix “a complication from last year.”

He missed the first five days of training camp before returning in a non-contact role on Tuesday. He participated fully the last two days.

The 6-foot, 197-pound Malone has battled injuries dating back to his college days. Still, he has used his time away wisely, usually returning as a better player.

Last season, for example, he recorded 11 goals and 16 points in 16 games after he rejoined the lineup. In the playoffs, had five goals and seven points in 10 outings.

Three years ago, following an injury-plagued campaign that forced him to settle for an AHL contract, he bounced back and received a two-way deal from Nashville.

“When you’re out injured and you miss it, you are determined to come back better,” said Granato, who also coached Malone in junior. “And lots of times … guys come back a better player. They just get to step back and gain a hindsight that they wouldn’t have otherwise. And they figure out how to add something to their game, they can assess things differently because they’re not in the heat of the day every day.

“And I think if anybody loves the game, that’s usually what happens.”

Malone figures to have a significant role for the Amerks again this season. In 2021-22, Appert utilized him in every situation, and he ran with his fresh opportunities. He finished with 20 goals and 37 points, both career highs, in just 37 contests.

“I felt like earlier in my career I didn’t get a whole lot of opportunity here and credit to the coaching staff in Rochester, I think you saw a lot of guys kind of get opportunities and run with it,” said Malone, who spent his first three pro seasons in Rochester. “… I just kind of wanted that opportunity and eventually got it.”

Malone, having established himself as a top-tier AHL player, likely would’ve had plenty of suitors as a free agent during the summer. Instead, he signed a one-year, two-way contract with the Sabres on June 29.

If the Sabres need help at center, Malone could be one of their top options.

He said last season was “probably the most fun I’ve had playing pro hockey.”

“We had a great group of guys which made it awesome, I’m sure you guys heard plenty of times,” he said. “I just think being comfortable with the situation there and the coaching staff’s unbelievable, getting to learn from guys like (assistants) Michael Peca and Mike Weber every day and advance your game.”

To be proactive and avoid a slew of travel issues likely related to Hurricane Ian, the Sabres bused to and from Columbus for Wednesday’s 4-1 preseason loss to the Blue Jackets.

The Sabres, of course, usually fly everywhere. Making the 328-mile trip to Nationwide Arena by bus helped them to steer clear of any headaches and ensure a firm arrival time.

One group departed Tuesday, while the other left Wednesday morning. Four players who skated in Tuesday’s 2-1 home win over the Philadelphia Flyers also played Wednesday.

Granato, having coached and played in the minors, including stints with the Columbus Chill, an old ECHL team, felt like he was going back to his roots.

“Actually, in a weird, probably odd, sick way it felt good,” he said. “It felt like hockey. Circumstances dictated they we did that. We talked to the guys and there was a genuine curiosity and excitement of let’s do it. It’s a lot easier to do it when you know you only have to do it once, let’s be real with that. It was a one-off situation.

“We liked it as coaches, but then the next thing we do is OK, now do we have to sell this to the players? And they were excited, actually, about it. … Those four guys who played back-to-back, credit to them, because they’re the ones who had to ride a bus yesterday, and I thought all four of them played really well.”

The Sabres plan to fly everywhere else.

Granato said Sabres goalie Craig Anderson, 41, had a maintenance day Thursday. Expect the veteran to receive more throughout the season.

“The work-to-rest ratio is totally different for Craig than than it is for their guys in their 30s,” Granato said. “We recognize that as an organization, as a coach, when you’re thinking of your team, they need less than a young guy does to prepare for the next game.

“That’s the positive, Craig Anderson knows how to get himself ready for the next game.”

The Amerks on Thursday signed captain Michael Mersch to signed a one-year AHL contract extension through 2023-24.