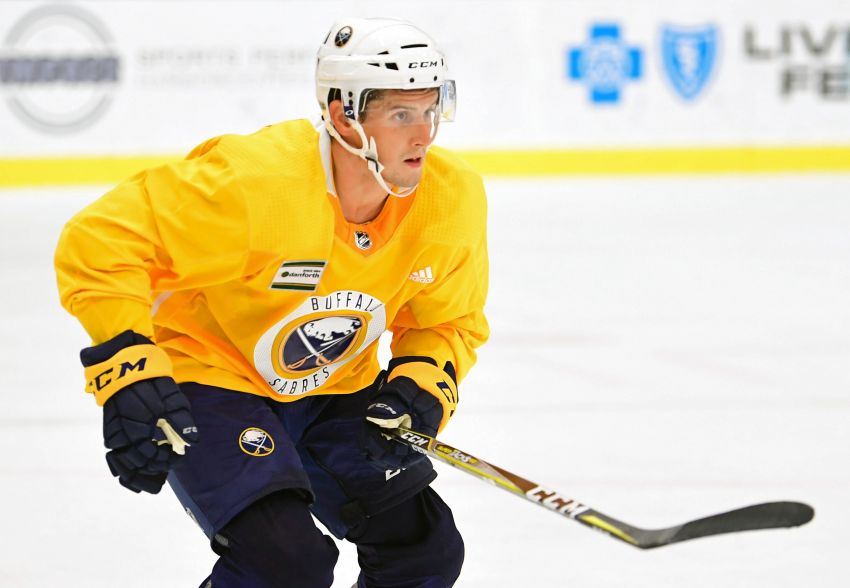 BUFFALO – In the spring, shortly after Stevie Moses finished his fifth season in Europe, watching the Stanley Cup playoffs forced the high-scoring winger to think long and hard about his career.

Seeing the Nashville Predators, whose organization Moses briefly joined in 2015, dismantle three opponents to reach the Cup final “was hard to watch,” he said. The Predators featured a slew of Moses’ former AHL teammates with the Milwaukee Admirals.

Moses, who set the Kontinental Hockey League’s single-season goal record in 2014-15, realized he “hadn’t made a serious effort to play in the NHL yet,” he said.

“I only had a couple months in Nashville’s organization and left right away,” said Moses, who’s participating in Sabres training camp on a tryout. “I want to give myself a real chance and see where it ends up.”

So Moses, 28, pursued his NHL dream, leaving big money on the table overseas. The Massachusetts native signed a one-year AHL contract with the Rochester Americans, Buffalo’s affiliate, in July.

“I’ve been in Europe 99 percent of my career,” said Moses, who noted money influenced his other recent career decisions. “I’ve enjoyed that, but I thought it was time for a different challenge.

The 5-foot-9, 172-pound Moses offers the Sabres an intriguing talent.

“Stevie’s a tremendous skater, he’s got tremendous speed, and he fits well in our system,” said Sabres coach Phil Housley, a Nashville assistant two years ago. “I really like his attitude these last few days. He’s been playing with a chip on his shoulder.”

Moses added: “I bring offense and that’s my game. That’s not going to change at 28 years old.”

“They want to play a fast game,” Moses said. “It kind of fits into the way I want to play.”

Given his talents and scoring history in the KHL, perhaps the world’s second-best hockey league, it’s not crazy to think Moses could someday earn a two-way contract and a look in the NHL.

First things first, however. Moses is inexperienced at the AHL level, having played only 24 games over two stints.

Barely two years ago, Moses thought would bypass the minors and play with the Predators.

Moses’ breakout 36-goal campaign with Jokerit Helsinki, then a KHL record, made him a hot commodity, so he signed a one-way, one-year contract worth $1 million as a free agent.

“It earned me a lot of respect in Europe,” Moses said of his career season.

But Moses never meshed with the Predators, and they assigned him to Milwaukee right away. By December, he was back in the KHL, this time with St. Petersburg SKA.

“When I was in Milwaukee, I was a little naive,” Moses said. “I had a one-way deal and I was expecting to be in the NHL, was unhappy.”

Moses performed well in Russia, scoring at a strong clip two years ago and winning a championship last season (he was injured and missed the playoffs) with former NHL stars Pavel Datsyuk and Ilya Kovalchuk.

“I had an opportunity to play for basically the best team outside the NHL in St. Petersburg with Kovalchuk and Datsyuk and all the big names,” Moses said.

Moses is a big name in Europe, too. Over here, though, he’s just another guy battling for a chance.

“It’s been something that’s helped me out a lot,” he said of his record-setting season. “But you can’t live up to that forever.”