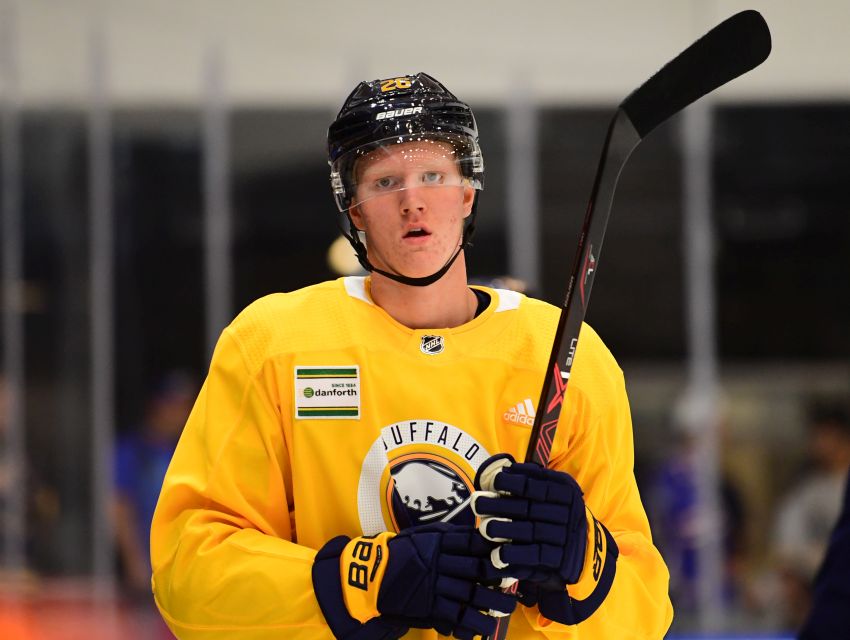 During their first practice together in the Swedish Hockey League, Dahlin made Olofsson look silly.

“He got the puck on the blue line and I was going out toward him, and he just put it between my legs and scores,” Olofsson said Wednesday after the Sabres opened development camp. “That was probably the first time I really noticed him.”

“When he did it again and again, it’s not just a fluke,” he said.

Nothing about Dahlin, the Swede the Sabres drafted first overall Friday, is a fluke.

That’s why he might be the best defense prospect in decades. That’s why he could potentially transform the Sabres into a contender. That’s why more than 1,000 fans showed up on a Wednesday afternoon in June, packing HarborCenter.

Dahlin said the size of Wednesday’s crowd surprised him. So did the cheers he heard for scoring a goal in practice.

“There hasn’t been a crowd that cheered for me when I scored a goal in (practice), so it was pretty special,” Dahlin said.

Wednesday was a pretty special day for a franchise that has become the NHL’s laughingstock. Dahlin’s first practice turned out to be an event.

The fans were so into the first session, the players saluted them after it ended.

“The building was electric,” Sabres assistant general manager Steve Greeley said. “I thought the most exciting part was when the players saluted the fans there and you saw just the reaction, like it almost gives you goosebumps or chills. If our players aren’t excited for this type of atmosphere, there’s probably something wrong with them.”

Players from certain eras of the Sabres, most recently the post-lockout teams from 11 and 12 years ago, will tell you what a special place Buffalo is when the Sabres are winning.

Wednesday offered a glimpse of that.

“For these four days I’ve been here, everyone is so friendly and they wish all the best for me,” Dahlin said. “It’s been amazing here. I love it. I can’t wait to get the season started.”

When Wednesday’s session started, a familiar face was instructing players on the ice in a blue Sabres track suit.

Former Sabres captain Brian Gionta, who lives in Clarence, asked if he could help out.

The winger finished last season playing with the Boston Bruins after captaining Team USA’s Olympic squad at the Pyeongchang Games.

“He hasn’t figured out what he’s doing next year, but (he’s) a tremendous guy, tremendous player, tremendous leader,” he said. “For us, the opportunity to have him around some of our players was a no-brainer.”

Greeley said Laaksonen will be in rookie camp in September. The Sabres would also like to examine some of their younger prospects over some camp veterans.

One thought on “First practice memorable for Rasmus Dahlin, Sabres”