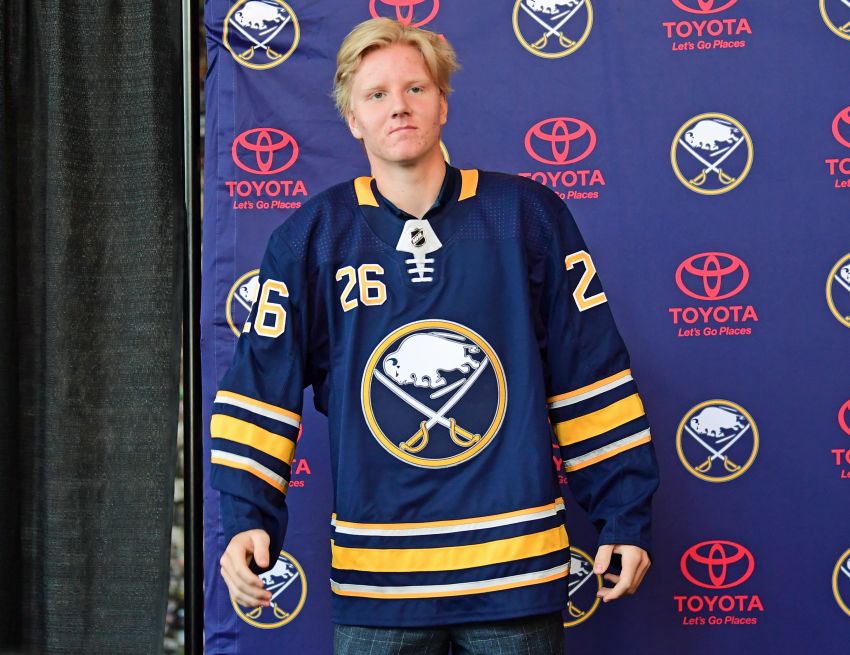 BUFFALO – On Saturday, a day after the Sabres drafted Rasmus Dahlin, the first overall pick was still walking around American Airlines Center proudly wearing his Blue and Gold jersey.

Most first-round selections don’t show up for the later rounds of the NHL Draft. But the day in Dallas provided the slick defenseman another opportunity to experience what he said “was my best time in my life.”

“To be able to be a part of the Buffalo Sabres, why don’t be proud and have the jersey on?” Dahlin said Monday during a news conference inside the KeyBank Center pavilion.

Dahlin’s excitement about joining the Sabres has been evident for days. The mega-prospect showed his enthusiasm again Monday answering questions, saying putting on his new No. 26 jersey would be an “amazing feeling.”

“If we’re going to change things in Buffalo, we have to have players who are excited about Buffalo, want to be a part of our community here,” he said. “We’ve seen that with some of our core guys.”

When the Sabres won the right to draft Dahlin, 18, he was immediately pegged as a core player – even a franchise savior – beside some of the NHL’s best young talent in center Jack Eichel, winger Sam Reinhart and defenseman Rasmus Ristolainen.

“He doesn’t need to be the savior,” Botterill said of Dahlin.

Botterill just wants him to fit in. The Sabres, of course, struggled mightily last season, winning only 25 games in Phil Housley’s first year as coach.

But in Dahlin and center Casey Mittelstadt, who joined Buffalo in March, Botterill has added two of hockey’s top prospects in just months.

That influx of talent, coupled with a firmer understanding of Housley’s expectations, could go a long way next season.

“Whether it’s kids we’re bringing up from Rochester, whether it’s a Casey Mittelstadt, whether it’s a Rasmus, we’re not expecting them to lead the room, but we’re expecting them to bring their positive attributes, their competitiveness,” Botterill said. “I think … just talking to some of our veteran players on our team, they’re excited about that, they understand that the talent level has increased with our team.

“They understand now the communication, they know what Phil’s looking for throughout the entire season.”

Housley, a Hall of Fame defenseman, will utilize Dahlin often. In the youngster, he possesses a weapon that should help the Sabres showcase a fast attack. A dearth of speed helped stymie Housley’s system last season.

“(Housley) knows everything about hockey and he knows what he talks about, so that’s great,” Dahlin said.

Housley’s excitement over the Swede’s arrival has been on display for weeks, whether he’s talking or tweeting.

“Nothing’s changed at all,” Botterill said. “That’s what I like about not only Phil but our whole coaching group, they’re excited about working with these guys.”

The coaching staff will start doing on-ice work with Dahlin and other Sabres prospects Wednesday, when development camp opens at HarborCenter.

“The two things he’s probably going to notice the most are how quickly the forecheck comes in on him … and how quickly wingers get on defensemen,” Botterill said.

To Botterill, Dahlin’s ability to embrace challenges on and off the ice helps him.

Following the news conference, the Sabres awarded Dahlin the same number he had in the Swedish Hockey League with Frolunda last season. Apparently, he wasn’t sure which number he would wear until the jersey was presented to him.

In the Sabres’ 48-year existence, players of all talents wore No. 26 before him.

Two-time 40-goal scorer Thomas Vanek sported it. So did Randy Wyzrozub, one of the franchise’s first players. The Sabres issued the number 20 times before Dahlin, according to hockey-reference.com.

Most recently, Matt Moulson wore No. 26.

But since the number now belongs to Dahlin, there is a very good chance no one will ever wear it again. Get used to seeing No. 26 Dahlin jerseys all over town for a long time.