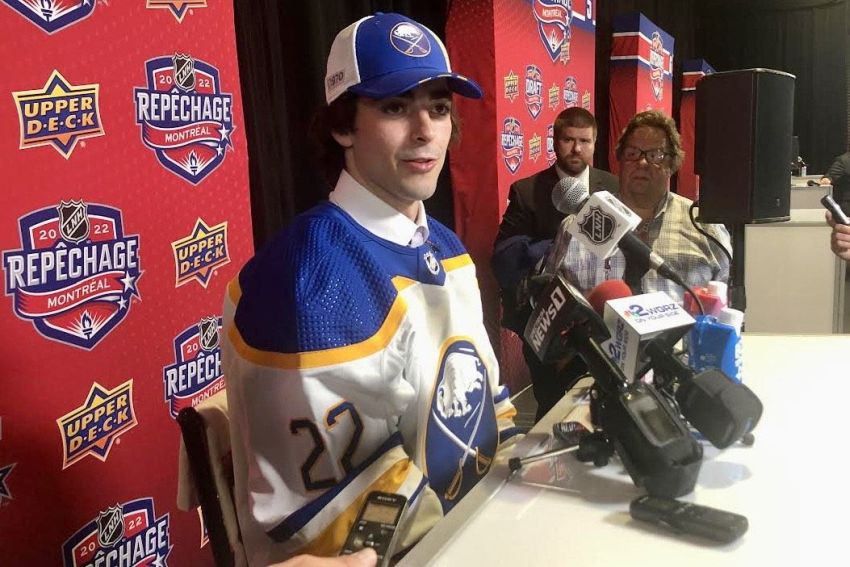 Matthew Savoie talks to the media after Buffalo drafted him ninth overall on July 7 in Montreal. ©2022

The arrangement was unusual. Matthew Savoie would spend most of the 2019-20 season practicing with the Winnipeg Ice, learning the rigors of major junior hockey at the tender age of 15. But the phenom would be permitted to play just half of the team’s games.

Savoie, the ninth overall pick by the Buffalo Sabres on July 7, had applied to Hockey Canada for exceptional status, which would’ve allowed the ultra-talented center to join the Ice on a full-time basis a year early. After the organization denied the request, the Western Hockey League gave him an exemption, awarding him 34 games instead of the usual five sanctioned for 15-year-olds.

“He had to grow up fast,” said Ice coach James Patrick, a former Sabres defenseman and assistant coach.

Savoie balanced a dizzying schedule, spending his time away from the Ice suiting up for Rink Hockey Academy’s Under-18 team in Winnipeg.

Smith said Savoie practiced with Rink Hockey just a few times all season, so he never found chemistry with those teammates. Some days, the gassed youngster played hours after returning from a trip with the Ice.

“There’s so many of those situations where he just came to the rink and you just thought he was going to fall over he was so tired,” Smith said. “But he just did it and he didn’t complain.”

Savoie performed dominantly with Rink Hockey, recording 19 goals and 52 points in 22 games. With the Ice, however, he often looked his age, mustering zero goals and seven assists in 22 outings against older competition.

Today, Savoie is one of hockey’s most dynamic teenage talents. His presence in the Prospects Challenge rookie tournament at LECOM Harborcenter – the Sabres are scheduled to practice today and play their first game Thursday – is highly anticipated.

Having missed all of July’s development camp recovering from a shoulder injury, most Sabres fans haven’t watched him up close.

Last year, Savoie’s first full campaign with Winnipeg, he compiled 35 goals and 90 points in 65 contests. The grueling season he experienced in 2019-20 certainly buoyed his development into one of the WHL’s elite forwards.

“Going through that experience at such a young age, getting to practice with 19- and 20-year-olds when you’re just 14 and 15, I think that was huge for my development and as a person, having to have that level of maturity to be around those guys,” Savoie said in July. “I think the whole experience in Winnipeg was a really positive one.”

While Savoie often struggled as a 15-year-old in the WHL, he matured rapidly, and when he returned to the league a year ago – he spent the 2020-21 season in the United States Hockey League because of the COVID-19 pandemic – he morphed into a star.

“It was a different year,” Patrick said of 2019-20. “We still felt he benefited from it. He was able to play against 19- and 20- year-olds, he played a way faster-paced game playing in our league. His stats showed that it was tough. … (His) scoring confidence was shaken a bit. But he really showed that he could play as a 15-year-old, play at this level, he could skate at this level. So at the end of the day, we felt it was really good for development.”