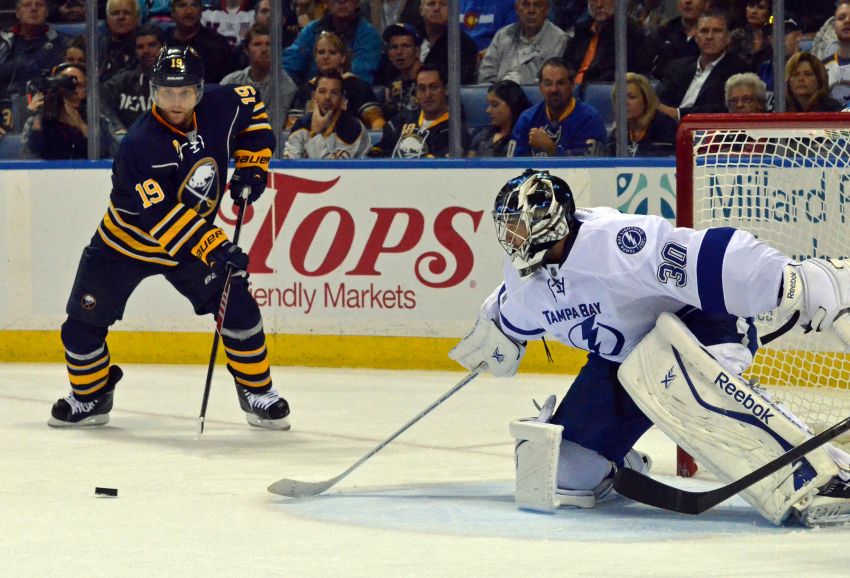 BUFFALO – A two-goal lead? Wait, the winless Sabres scored twice in one game?

Entering Tuesday’s tilt, the struggling club had only two goals in its first three contests. Heck, the Sabres hadn’t even held a lead yet this season.

But they rebounded nicely against the Tampa Bay Lightning, building a 2-1 advantage before co-captain Thomas Vanek tipped Jamie McBain’s shot past goalie Ben Bishop 5:21 into the third period.

The horn sounded. Players raised their sticks. The 18,243 fans inside the First Niagara Center roared in appreciation of what appeared to be the Sabres’ third goal of the night.

The celebration was short-lived, however.

The referee had blown his whistle as the puck entered the net. He was penalizing Vanek for high-sticking an opponent several seconds earlier.

The cheers quickly turned into boos.

Why did the play continue? What the heck happened?

“I don’t know,” Vanek said after the Sabres’ 3-2 overtime loss. “I just saw (the replay) from the penalty box. I didn’t even know I got him. I scored a goal 10 seconds later and all of a sudden it was a penalty. I thought (the referee) was a little bit off today. It happens. Too bad.”

The Lightning’s Teddy Purcell tied the game on the ensuing power play. Alex Killorn then scored 1:50 into overtime following a scramble in front.

The Sabres are now 0-3-1 this season. They did, however, earn their first point for reaching overtime.

“It doesn’t feel like any consolation to lose that one point,” Sabres center Cody Hodgson said.

Now, about that disputed goal …

The NHL explained the call on its “Situation Room Blog” as follows: “At 5:21 of the third period in the Lightning/Sabres game, the end-zone referee had a Buffalo penalty on delay. The referee did not see Sabres forward Steve Ott touch the puck, which then rebounded to Jamie McBain whose shot entered the net simultaneous with the referee blowing his whistle. The net result was the correct call – no goal, penalty to Buffalo.”

Vanek said he “didn’t even know we had a penalty.”

“I tipped it and next thing I know he’s waiving it off and pointing to me that I got two minutes,” he said. “It was a little confusing, especially at that time to make it 3-1. I think it’s what we needed.”

Sabres goalie Jhonas Enroth even left the crease and headed to the bench thinking Tampa Bay was being penalized.

Vanek couldn’t remember high-sticking anyone. The infraction allegedly occurred behind the net, he said.

“I don’t know what happened there,” Sabres coach Ron Rolston said. “We had the puck, too, for I don’t know how many seconds. We thought we were going on the power play.”

Still, the Sabres refused to blame the call on the disappointing loss.

“We’re not going to make excuses, especially at this point in the season,” Hodgson said. “That’s tough. But at the same time, this game was winnable. We had enough chances.”

The chances followed another sluggish start. The Lightning outshot the Sabres 10-3 during the first period.

Hodgson scored the season’s first power-play goal – they began the night zero of 13 – 11:09 into second period.

“The power play gave us a boost finally, and I think it carried over into the five-on-five play,” Vanek said.

After Tyler Johnson tied it, McBain’s quick wrist shot put the Sabres up 2-1 on the power play at 18:43.

“He shoots it and it goes in,” Rolston said sarcastically. “I think at times they try to be too precise at where they’re shooting instead of just getting it on net.”

Clearly, Rolston, whose Sabres pumped 13 of their 23 shots on Bishop in the third period, wants his players shooting more.

“We still don’t get enough at their net,” he said. “We had a lot of chances we just passed up. We don’t shoot the puck still.”

At least they can stop the puck. Enroth’s 31-save effort was the Sabres’ fourth strong goaltending effort this season.

Enroth subbed again for Ryan Miller, who’s battling a mild groin injury. Miller dressed and should be able to play Thursday against Columbus.

“He would’ve been ready today for the most part,” Rolston said.