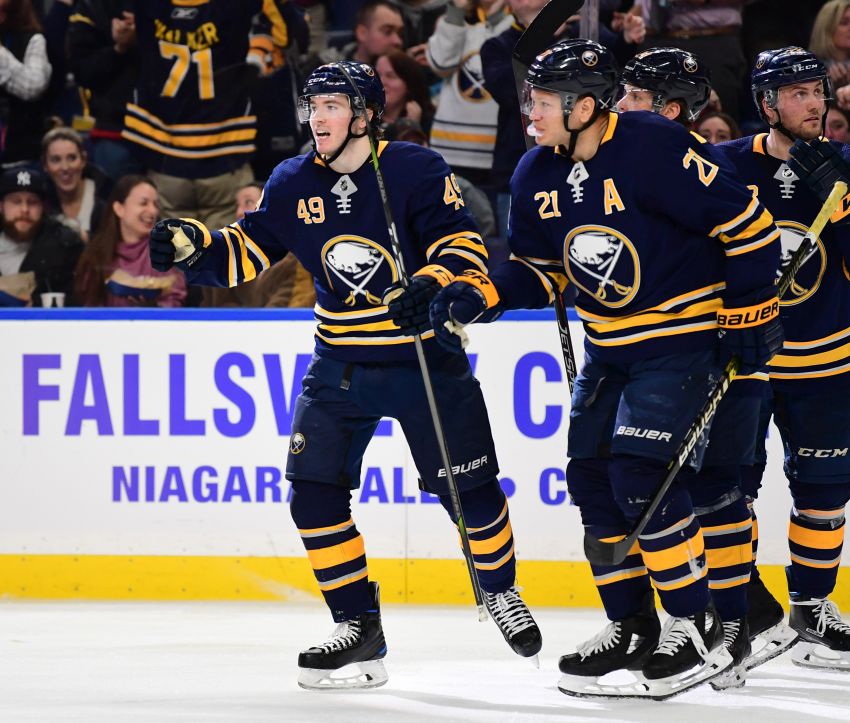 BUFFALO – Early in Tuesday’s 5-1 victory, Sabres rookie C.J. Smith utilized his speed and cranked a shot off the post, a sign the speedy winger’s first NHL goal could be imminent.

“Got a little more confident tonight,” Smith said after scoring 4:14 into the second period in his sixth NHL game, a goal that put the Sabres ahead for good.

Meanwhile, rookie defenseman Lawrence Pilut, 23, has generated offense since the Sabres recalled him in late November. Still, the slick Swede was looking for his first goal 12 games into his career.

“My first thought is always get the puck through and just try to get it on the edge of the goal all the time,” Pilut said after scoring at the 17:45 mark, capping a wildly entertaining five-goal second period. “Just try to find those small spots.”

One goal from a rookie would’ve been huge for the Sabres. They desperately need secondary scoring, especially with captain Jack Eichel out. Two goals helped the Sabres enjoy their most prolific period at home since Nov. 28, 2009 against Carolina.

Fourteen Sabres tallied a point during the dizzying second, tying the franchise record for most players with a point in a period, according to NHL PR. It previously happened Nov. 2, 2006 here against Tampa Bay and Oct. 21, 2009 at Florida.

“We had all four lines contributing, a lot of O-zone chances,” said Sabres center Evan Rodrigues, who assisted on Jake McCabe’s short-handed goal. “It could’ve been even more in the second. That’s what happens when you’re rolling shifts over in the O-zone and tiring teams out. That’s when you start to get rewarded.”

After sniper Jeff Skinner’s 29th goal tied the game, Smith pounced on a loose puck before beating goalie Keith Kinkaid from the right circle. The puck barely trickled over the goal line, leading to an odd celebration.

Nobody, it seemed, knew it went in besides Smith.

“I shot it, went behind the net and saw it was in,” Smith said. “It was kinda funny, nobody else really knew it was in so I kind of celebrated by myself, but it felt good.”

He added: “Finally a matter of time it went in. Felt really good.”

“I just liked how he was poised, he was composed,” Housley said.

Pilut, who possesses supreme vision and a knack for getting the puck on net, got his wrist shot from the right point through traffic.

“Today was a good boost for me to get the first one,” Pilut said.

Housley said of the rookies: “It’s going to help their confidence as we move forward.”

The win, the Sabres’ 23rd overall but just their third in nine tries, should boost everyone’s confidence.

“It was a total team effort,” Housley said.

He added: “Everybody was in attack mode and paid attention to detail when the puck got turned over.”

Despite outplaying New Jersey early before the crowd of 18,212 inside KeyBank Center, the Sabres fell behind just 1:28 in when the puck deflected off Blake Coleman’s skate.

“It’s kind of a weird thing,” Sabres goalie Carter Hutton said. “I’m playing his stick and it goes in off his skate. Just no real flow in first period.”

While Hutton only made 20 saves, a few big stops kept the Sabres in it.

“I wasn’t really called upon, but you make a couple timely ones,” Hutton said.

New Jersey, of course, is hardly a powerhouse. But since the start of the 2014-15 season, the Devils were 6-0-0 against the Sabres here and 10-1-1 overall entering Tuesday.