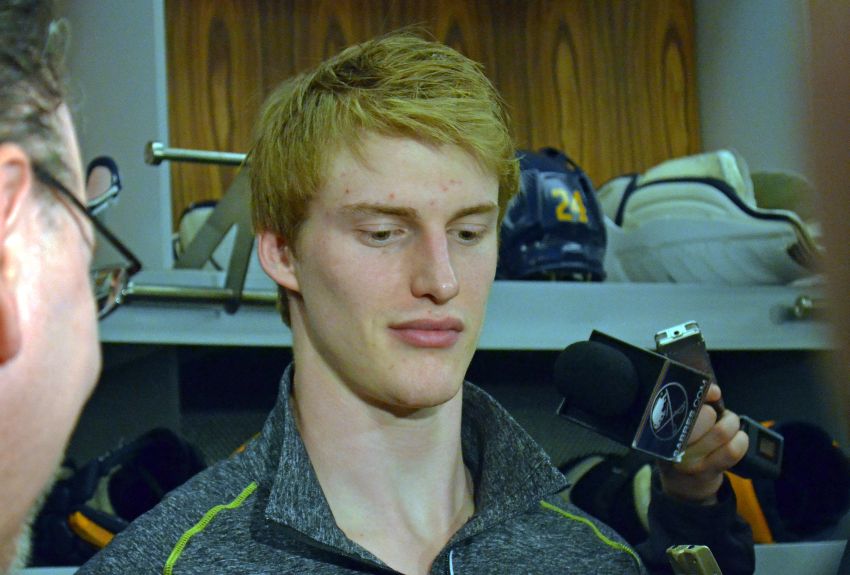 BUFFALO – Here are some quick updates on several of the injured Sabres. With the season finally over, most players will tell you exactly what happened to them.

– Defenseman Tyler Myers said he broke a couple of ribs when he crashed into the net March 25 in Montreal.

“It’s coming along quite well,” Myers said this morning inside the First Niagara Center. “I had a week of hope after it happened. It turned out we found a couple of broken ribs. It wasn’t the best news, but I’m feeling pretty good right now. Another week or two it should good.”

“They told me four to six weeks,” Enroth said. “Yesterday was four weeks. So it’s starting to get a little bit better. I should be turning the corner here in the next couple days. I’m feeling pretty good right now.”

– Goalie Nathan Lieuwen, who has a scary concussion history, said he’s recovering well from the one he sustained eight days ago in Philadelphia. The rookie wouldn’t rule out playing again this season if Rochester advances in the playoffs.

“I just kind of toe-picked and tweaked it the wrong way,” Stewart said. “Just a precaution, just shut it down. It’s just about getting healthy and having a good offseason and coming back strong next year.”

“It’s the first one,” Sulzer said. “So I didn’t know what to expect. It’s not getting better as fast as I was hoping.”

– Goalie Michal Neuvirth would only say he sustained a lower-body injury March 13.