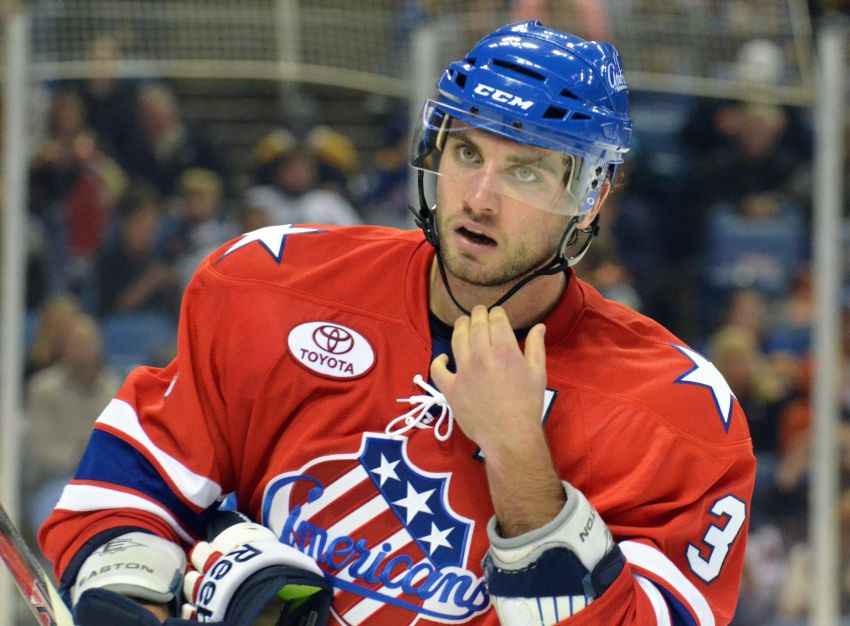 BUFFALO – In the coming weeks, if the NHL and the Players’ Association hammer out a new collective bargaining agreement, the Sabres will convene for an abbreviated training camp and begin molding a six-man defense corps from a stacked group that stretches more than 10 deep.

The Sabres boast eight NHL defensemen after acquiring Adam Pardy from Dallas this summer. Eleven defenders in the organization appeared in the big leagues last season, including T.J. Brennan, who’s producing at a clip rarely seen during the Rochester Americans’ 57-year history.

With a goal and a career-high five points in Wednesday’s wild 7-6 win over the Lake Erie Monsters, Brennan already has 12 goals and 29 points in 29 games, putting him just six tallies shy of Rick Pagnutti’s 40-year-old franchise record for goals by a defenseman.

In his fourth AHL season, the slick 23-year-old’s morphing into one of the league’s dominant offensive threats.

“He’s been a catalyst for us offensively,” coach Ron Rolston said Friday prior to the Amerks’ 4-1 win over the Lake Erie Monsters before a capacity crowd of 19,070 fans inside the First Niagara Center. “He’s got great offensive instincts. He can shoot the puck a ton. He’s just hard to control out there.”

But whenever the NHL season starts, Brennan, who signed a separate AHL contract to avoid waivers earlier this season, will have to clear waivers if the Sabres want to send him back down.

What the heck will the Sabres do with Brennan, the 31st overall pick in 2007? Do they really want to risk losing a prospect at the peak of his development?

Brennan, at least publicly, isn’t fretting about his situation.

“I think it’s more (the Sabres’) situation, you know what I mean?” Brennan said. “I can’t exactly speak for what they’re going to do or anything. I’m just trying to become the best player I can … and let them make the hard decisions. ….

“What happens happens. Just make the best of it.”

Brennan’s been making the best of his opportunities for years. He had 15 goals and 39 points with Portland two years ago, and then 16 goals and 30 points with Rochester in only 52 appearances last season, when he earned an 11-game NHL recall.

This year, however, Brennan’s elevated his game to a new level.

He’s leading the Amerks in scoring and began Friday tied for second among AHL defensemen. His six power-play goals rank fourth. He skated more than 30 minutes on Dec. 11. He’s also put his lethal shot on net 112 times this season.

Everything culminated during Brennan’s 200th professional appearance Wednesday, a game the New Jersey native called “kind of a special night.”

Brennan traces much of his recent development to the normal maturation a hockey player experiences.

“As you get older, you just tend to mature, whether you want to or not,” Brennan said. “You got to learn from your mistakes. This year, I’m just trying to focus on keeping it simple and playing for my end first.”

Rolston said Brennan, an assistant captain, has taken on a greater leadership role this season.

“He’s trying to perfect his game because he wants to play here (in Buffalo) and be a regular and have a career at this level,” Rolston said. “So he’s in the process of really fine-tuning his complete game.”

Mancari added: “You see a lot more confidence in his game. He knows that his weapon’s his shot, and he’s using it. He’s getting into open spaces and really utilizing his gift. He’s a shooter. This year, I think he’s even moving his feet a lot better.”

Ultimately, Brennan believes his defense will help him reach the NHL.

“You can get away with a few things down here that I know you can’t in the NHL,” Brennan said. “It’s definitely opened my eyes up a bit. It’s kind of set a little fire behind me. It lets me know I got to step it up and really keep motivated that I got a lot more to go and a longer road ahead of me to get there and stay in the NHL.”

Notes: Amerks center Cody Hodgson, kicked back to the minors by the NHL lockout, scored twice Friday. … The crowd was the largest in Amerks history and the eighth-largest in AHL history.