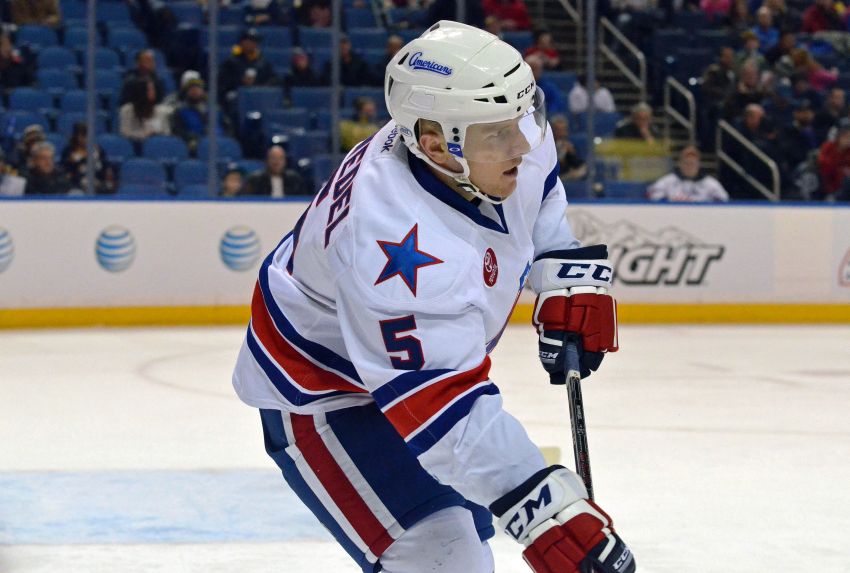 ROCHESTER – Chad Ruhwedel said his first concussion “wasn’t fun.” The defenseman experienced bad headaches for a few days after Philadelphia’s Zac Rinaldo elbowed him in the head April 6 during a recall to the Buffalo Sabres.

Ruhwedel figured his regular season was over.

But the 23-year-old, who was sent to the AHL earlier this week, felt well enough to return Friday for the Americans’ 5-1 win against the Syracuse Crunch inside the Blue Cross War Memorial.

“A little out of breath at points,” Ruhwedel said. “But it felt good to be back.”

“We knew there was a chance he might be able to play this weekend,” he said. “I was really happy with his game tonight. I thought for his first game back, not being at game speed, coming from the NHL down here is a huge adjustment because the game’s different down here.”

Ruhwedel wasn’t happy with Rinaldo’s hit, which earned the agitator a four-game suspension. Rinaldo elbowed Ruhwedel in the head after he had shot the puck from the point and was bent over a bit.

Rinaldo partially blamed Ruhwedel – “My bad and his bad,” he said – for the hit.

“I didn’t think it was clean, that’s for sure,” Ruhwedel said. “I thought he kind of jumped and was in a pretty vulnerable spot. It’s one of those hits they’re trying to get rid of in hockey. What more can you do?”

Rochester closes its regular season this afternoon in Toronto against the Marlies. The Amerks are on a 7-0-1 run. Their playoff opponent hasn’t been determined yet.

Related: Sabres upset about Zac Rinaldo’s suspension, plan to be ‘vocal on this one’