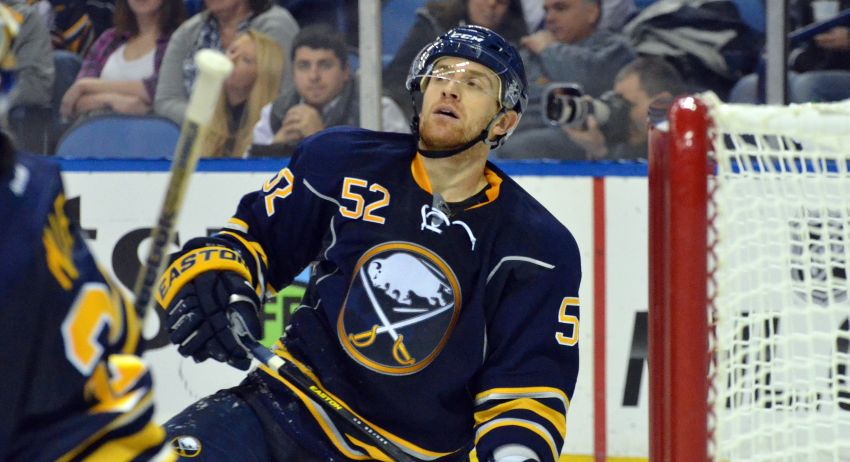 Jiri Tlusty hit Sulzer a few minutes into the Sabres’ 4-2 loss in Carolina. He bumped his head on the glass.

“Then it went back and forth a couple times,” Sulzer recalled Monday.

Sulzer’s disappointing season – and possibly his 57-game Sabres career – was over.

“I didn’t know what to expect,” the German said about the concussion as the Sabres cleaned out their lockers inside the First Niagara Center. “It’s not getting better as fast as I was hoping.”

The 29-year-old thought he would be able to play within or week or two. He is still experiencing headaches.

“It’s more like pressure on my head I feel,” he said. “I have better days or worse days.”

Still, Sulzer, an unrestricted free agent this summer, is in good spirits and confident he will fully recover.

The concussion capped one of his oddest seasons.

After four straight years in the NHL, Sulzer became a casualty of the Sabres’ ill-advised youth movement. They waived him Sept. 29 and sent him to Rochester.

He played only 10 AHL games before they recalled him for good Nov. 23 after new coach Ted Nolan scouted the Americans.

“That felt good,” said Sulzer, who tore up his knee early in 2012-13. “I think he thinks pretty good of me and I’ve most of the time played since he’s the coach.”

But injuries and some healthy scratches limited Sulzer to just 25 games.

“I think I proved again that I belong here,” he said. “A couple injuries again. It seems to happen to me always.”

Sulzer isn’t sure about his future. The team’s old regime signed him to one-year contracts the last two summers.

“I’m open to everything,” he said.

One thought on “Alexander Sulzer still recovering from first concussion, open to returning to Sabres”