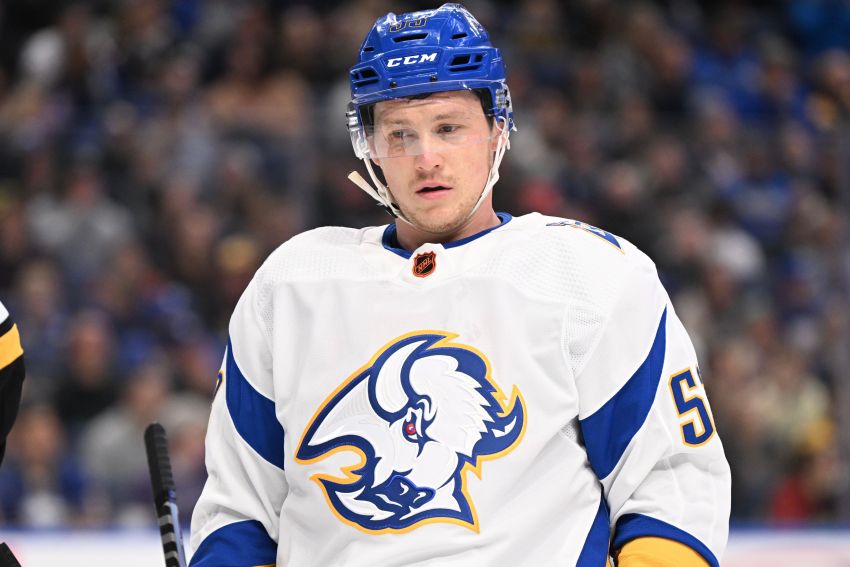 BUFFALO – The edge Jeff Skinner possesses makes him one of the NHL’s most unique talents. Not only is the Sabres winger a top scorer, he’s also willing to go hard after opponents.

To wit: with 22 seconds left in the third period of Friday’s 4-3 overtime loss to the Pittsburgh Penguins, Jake Guentzel hit Sabres goalie Craig Anderson’s hand as he froze the puck. Skinner took umbrage and went after Guentzel.

Guentzel slashed Skinner before he returned the favor and cross-checked Guentzel in the face, earning a five-minute match penalty. Skinner will have a hearing today with the NHL Department of Player Safety.

Jeff Carter scored 1:36 into overtime on the ensuing power play, sealing the win before 17,205 fans at KeyBank Center.

An innocent freezing of the puck turned into a game-changing moment.

Of course, Granato walks a fine line with Skinner defending his goalie and keeping his emotions in check.

“Every day you walk it,” he said. “These guys are high-energy, high-emotion guys. These are intense situations. So it’s not something you can snap your fingers to fix.”

While Anderson chose his words carefully, he was clearly irked Guentzel got off with just a slashing penalty on Skinner.

“Free reign as far as coming in,” he said. “It wasn’t much, but it was clear as day I was freezing it for three seconds ahead of time. There’s no reason to do that and then that threw us. And then he slashes Skinny, Skinny slashes back, and before you know it, we’re at the short end of the stick on that. That’s just the way she goes.”

Still, Anderson said the Sabres must hold their composure.

“We got to use that as a learning curve, learning tool for us,” he said. “It’s one of those things where (we need to) stay in the moment and get the two points is more important than getting frustrated.”

The Sabres appeared to have all the momentum, too, having tied the game with 1:30 left when captain Kyle Okposo scored a power-play goal with Anderson on the bench. The goal was just Okposo’s second this season and first past a goalie.

Skinner and winger Victor Olofsson scored the Sabres’ other goals in the second period. Winger Casey Mittelstadt recorded three assists, ending a five-game point drought in which he was a minus-7.

“Because he’s been putting in the work,” he said. “He’s dialed in, his effort’s been there, especially the last few games. I never question his effort, but I think he’s pushed harder and harder, and tonight he got some bounces that he hasn’t been getting, really.”

Guentzel opened the scoring before Rickard Rakell’s third-period goal tied it at 2. Brock McGinn put the Penguins up later in the period.

The Sabres, who failed to score at least four goals for the first time in six games, play the Penguins tonight in Pittsburgh.

They pumped 13 of their 21 shots on Penguins goalie Tristan Jarry during a scoreless first period, controlling the play.

“We played fast, we played hard, we had really good gaps, we didn’t let them in our zone,” Sabres defenseman Rasmus Dahlin said. “We had our chances, so tomorrow I think we’re going to score on our chances.”