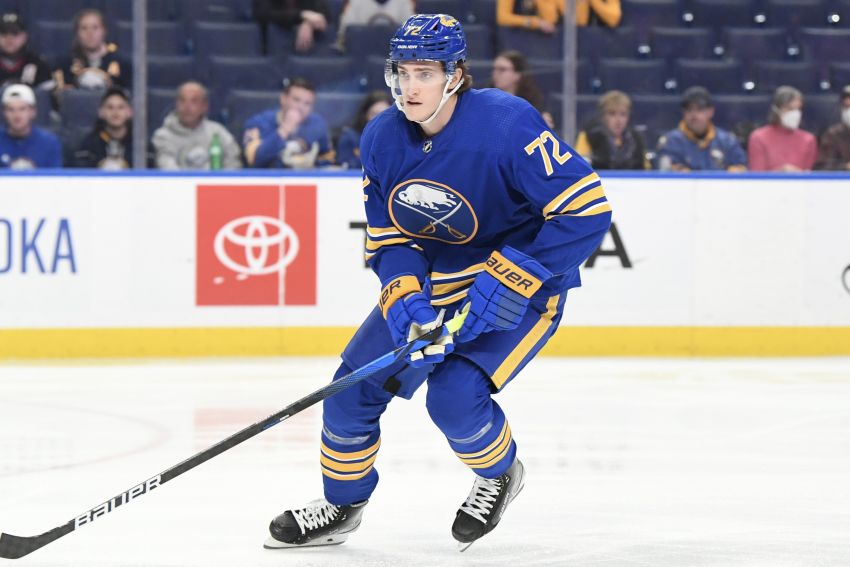 Tage Thompson has one year left on his current contract. ©2022, Micheline Veluvolu

Talent is just one part of the equation that convinced the Buffalo Sabres to award Tage Thompson a seven-year, $50 million contract extension.

The deal, announced early Tuesday evening, raised some eyebrows. Yes, Thompson, 24, is coming off a breakout 38-goal season in which he morphed into the Sabres’ top scoring threat and No. 1 center. Still, he hadn’t scored more than eight goals in a campaign prior to last year.

The 6-foot-7 Thompson also has one season left on his three-year, $4.2 million deal. The Sabres could’ve waited and forced him to prove himself again.

But Thompson’s maturity likely convinced them he was a cornerstone talent worthy of a massive long-term contract after just one splendid season.

Since arriving in 2018 from the St. Louis Blues in the blockbuster Ryan O’Reilly trade, Thompson has endured loads of adversity, getting demoted late in his first season, injured in his second and benched in his third.

Thompson never lost his belief he would develop into an elite NHL player, and shortly after coach Don Granato took over during the 2020-21 season, he began consistently showcasing his talents. When Granato, who also coached him in junior, shifted him from right wing to center late in training camp last year, Thompson seized the career-changing opportunity.

“Tage Thompson embodies the pride we expect from every player who wears the Buffalo Sabres sweater,” Sabres general manager Kevyn Adams said in a statement on team’s website. “His success last season is a testament to his unrelenting dedication to his craft and commitment to bettering the team both on and off the ice, which we believe will help us reach even greater heights moving forward. We are thrilled to extend Tage, keeping him and his family in Buffalo for many years to come.”

Thompson, who could’ve become a restricted free agent next year, is under contract through the 2029-30 season, longer than anyone on Buffalo’s roster.

He had eight multi-goal games last season, including his first hat trick, and scored nine times over a nine-game stretch from Feb. 13 to March 2. He became the first Sabres player since Thomas Vanek in 2006-07 to register 38 or more goals and 30 or more assists.

Thompson’s new contract includes a five-team no-trade clause in years two to seven, according to capfriendly.com.