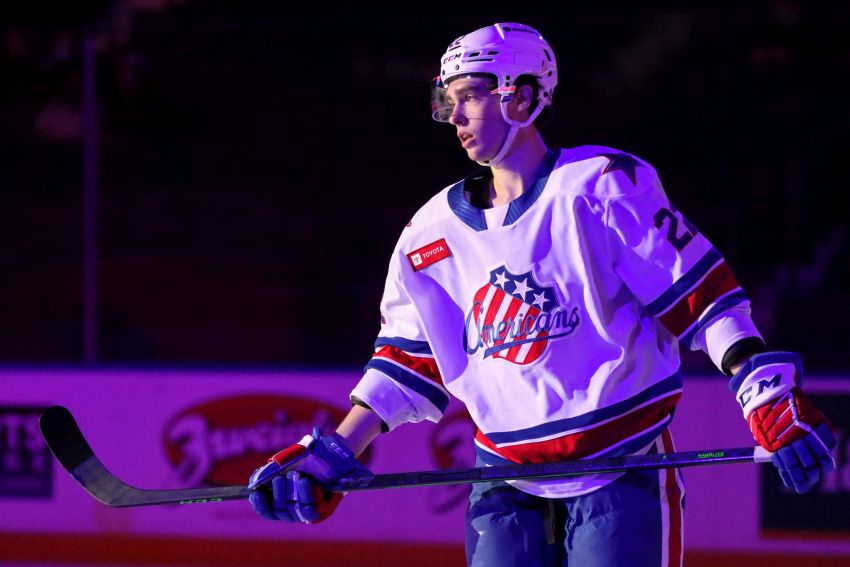 Three days after recording his first hat trick as a pro, Buffalo Sabres prospect Jack Quinn added to his career-best outing for the Rochester Americans.

The AHL on Tuesday credited Quinn with the Amerks’ game-tying goal with four seconds left in regulation in Saturday’s 6-5 overtime loss to the Belleville Senators.

Quinn, 20, is the first Rochester player to have a four-goal game since Derek Whitmore on Nov. 25, 2011. It’s also the AHL’s first four-goal contest this season.

The ultra-talented winger has now scored a whopping 17 goals and 34 points in 23 games this season. Ironically, the goal, originally credited to Amerks captain Michael Mersch, pushed Quinn into a tie with Mersch for the team lead in goals, the AHL’s second-highest total.

So what happened? Replays of the goal appear to clearly show Quinn’s shot deflecting off Mersch and into the net.

But when the Amerks watched video of the goal from a different camera angle in Blue Cross Arena, they noticed Quinn’s shot hit a Belleville defender. The videos of the goal on the internet are basically an illusion.

The Amerks submitted the video to the league, and the change was made.

Quinn, the eighth overall pick in 2020, made his NHL debut last Wednesday.