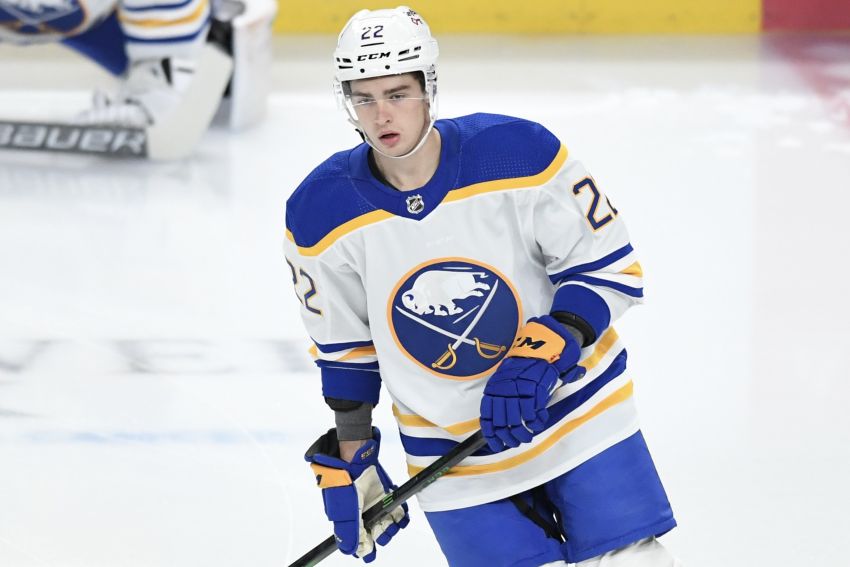 BUFFALO – To get an understanding of how much Jack Quinn’s teammates like him, two of them, Mattias Samuelsson and Ryan Scarfo, traveled from Rochester to KeyBank Center on Tuesday to watch their friend’s NHL debut with the Sabres.

Samuelsson and Scarfo put on No. 22 Quinn white Americans jerseys backwards so the name and number faced the ice and grabbed front row seats for the pregame warm-up.

As Quinn took the customary solo lap given to players making their debut, they banged on the glass, cheering their friend on. Meanwhile, the affable Quinn, who knew his buddies were coming, couldn’t stop smiling.

“I was just trying to enjoy it,” Quinn said following the Sabres’ 6-1 loss to the Tampa Bay Lightning. “I was obviously laughing that my buddies were on the glass there. That was a pretty cool moment.”

In what has become another rough season – on Tuesday, the Lightning annihilated the Sabres and goalie Ukko-Pekka Luukkonen left the game injured – Quinn’s debut generated excitement and offered more hope for the future.

“I’ve heard nothing but unbelievable things and he looked really good out there so far,” Sabres winger Alex Tuch said Tuesday morning. “All I can say to him is just go out there and have fun. … He’s definitely champing at the bit to get out there. It’s exciting to watch his excitement, honestly. I think he’s going to have a really good career and it starts with game one.”

Quinn, 20, has quickly developed into one of the AHL’s elite scorers in Rochester, and against the Lightning, he looked comfortable, showcasing his skill and generating offense before the crowd of 8,368 fans.

Naturally, Quinn acknowledged he felt some nerves before the game.

“But I was pretty confident with where my game was at, so it wasn’t too bad and it probably went away after the first shift,” said Quinn, the eighth overall pick in 2020.

Quinn played 16 minutes, 30 seconds over 19 shifts Tuesday, pumping a team-high three shots on goal and registering a minus-1 rating. He skated at left wing beside center Dylan Cozens and Vinnie Hinostroza and also on the Sabres’ No. 1 power-play unit.

“Jack I thought was really good,” said Sabres coach Don Granato, who put Quinn’s line out for the opening faceoff. “I liked a lot of things in his game. He created a couple chances. He was very aware with the puck, very in tune in the game. I thought it was a real good first game for him.”

Late in the third period, Cal Foote blocked Quinn’s shot in the crease and the puck stopped on the goal line. Late in the first period, after Cozens drove in and lost the puck, Quinn appeared to have an opportunity to bury it around the slot, but Victor Hedman dove and blocked his attempt.

“It’s a good thing, for sure,” Quinn said of his scoring chances. “I think it’s promising. I think our line played pretty well and got rewarded with some chances and I think playing with the two players I did, they’re going to make great plays so you’re going to get some looks from that, too.”

Quinn was one of the Sabres’ few bright spots during their sixth straight loss (0-4-2). They trailed 2-0 10:45 into the contest and couldn’t convert two early breakaways that would’ve gotten them back in it.

Luukkonen, who has started of the last 11 games, left the game with a lower-body injury after the first period after stopping seven of the nine shots he faced.

Granato did not have an update on the Finnish rookie. He said he would know more in the morning.

“I know where he was affected, but I don’t know details on it,” Granato said. “They didn’t know details right away. … They just pulled him out to look further at it at that point, knowing we got to look at this, he shouldn’t be in there.”

Sabres goalie Malcolm Subban stopped 23 of the 27 shots he faced in relief. In the second period, after Pat Maroon ran into him, Subban was in some discomfort but stayed in the game.

Hinostroza scored the Sabres’ only goal, a power-play tally.

“No excuses,” Granato said. “We weren’t sharp and we paid the price.”

Sabres winger Zemgus Girgensons said: “The effort, it’s not what it needs to be.”