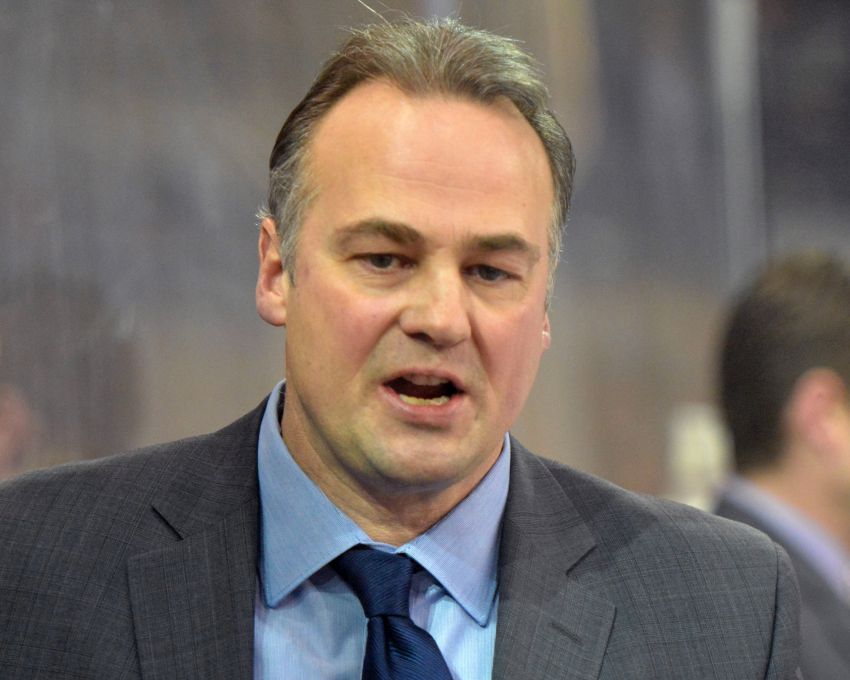 Dale Hawerchuk is one of the NHL's all-time greats. ©2020, Dan Hickling, Hickling Images

So around 8:30 a.m. Tuesday, Pat LaFontaine said he texted his former Buffalo Sabres teammate to say he was thinking about him and praying for him. About a minute later, Hawerchuk messaged LaFontaine, thanking him.

But later in the day, as LaFontaine and his wife, Mary Beth, were out eating dinner, Brad May, a former Sabres teammate, left a voicemail to share the news Hawerchuk had passed away. He was 57.

“My wife and I were sitting there in shock,” LaFontaine told the Times Herald on Wednesday.

Barely four months ago, Hawerchuk’s son, Eric, tweeted a photo of his father following his final chemotherapy treatment. Last week, Howard Campbell, the owner of the Barrie Colts, the team Hawerchuk coached for nine seasons, told BarrieToday.com he hoped to see him behind the bench for the 2020-21 Ontario Hockey League season.

Last month, Dave Hannan, another former Sabre, talked to Hawerchuk, who was affectionately nicknamed “Ducky” by his teammates.

“It was just like we were right back in the dressing room next to each other,” said Hannan, who became choked up discussing his friend.

Hannan, who lives in Pittsburgh, told Hawerchuk they would golf at Oakmont Country Club, a historic course in western Pennsylvania, after he beat cancer.

He agreed he would come down. Hannan promised he would hold him to it.

Hawerchuk’s everyman personality endeared him to his teammates and made him one of their leaders. He was hockey’s quiet, down-to-earth superstar.

“He just never had a bad day, always happy, even-keeled and a guy that you would look to,” former Sabres goalie Clint Malarchuk said. “All of a sudden, you’re following this guy. It wasn’t anything he said. It was everything he did.”

But Hawerchuk, incredibly, always seemed underappreciated. He spent his first nine seasons in Winnipeg, where he enjoyed little team playoff success and was overshadowed by Gretzky’s Edmonton Oilers and the Calgary Flames, the Jets’ Smythe Division rivals.

“He probably didn’t get as much credit as he should’ve, the player he was,” said LaFontaine, who was elected to the Hall of Fame in 2003, two years after Hawerchuk. “I mean, in the industry, everybody knew what a great player, Hall of Famer, but even more so a great guy.”

In Buffalo, the Sabres had LaFontaine and Alexander Mogilny, one of the greatest center-wing duos in history. It’s easy to forget, but in 1992-93, the same season LaFontaine scored 53 goals and 148 points and Mogilny scored 76 goals, Hawerchuk quietly registered a career-high 80 assists and 96 points.

“His ability to make a play was staggering,” said former Sabres coach Rick Dudley, who also played with Hawerchuk for a few weeks in Winnipeg.

Still, when Dudley learned Hawerchuk had passed away, a different image materialized.

“When I first heard that, I remembered the smile,” he said. “He had an infectious smile.”

“He was very humble but very personable,” he said. “He was really approachable. It’s like some of the guys you would think that are at a certain level maybe there’s ego involved, and Dale just always had a quiet demeanor.”

Malarchuk said: “I don’t even think he thought he was that good. He didn’t act like it.”

His lack of ego helped Hawerchuk prosper in Buffalo. By then, he understood his chances to win the Stanley Cup were dwindling.

Hawerchuk accepted being the No. 2 center behind LaFontaine, a new role former Sabres defenseman Randy Moller said he thrived in.

“There was no Patty and Alex getting those points … without Dale Hawerchuk,” he said. “There’s no way, there’s just no way, because with the matchups and stuff like that and the way the power play ran, he played a big, big part of that.”

Hannan said: “He was the ultimate team player.”

The memories of the 1992-93, a rollicking season in which the Sabres scored 335 goals and won their first playoff series in 10 years, are cherished by LaFontaine and others.

“It’s just great memories,” LaFontaine said. “The mortality and vulnerability of something like this, it does make you reflect. I think we’ve had an opportunity because of COVID to look back at old game films and watch games from before which we probably wouldn’t have and really reminisce.”

LaFontaine has been reminiscing a lot this week. He would often ride to games with Hawerchuk, discussing hockey and life on the 25-minute drive from the suburbs to Memorial Auditorium.

The memories of watching a 17-year-old Hawerchuk play for the Cornwall Royals are still fresh in LaFontaine’s head.

“I said, ‘He’s got hands like Gretzky,’” LaFontaine said. “He had a very unique skating style, but he had soft hands, he could pass, great vision. Probably right under Gretz, one of the best passers to ever play the game. Unbelievable hands, unbelievable hockey sense. Just a great player.”

That hockey sense, according to Dudley, ranks among the greatest ever.

“They used Wayne Gretzky a lot of times to say the game slowed down for him,” he said. “It did the same for Dale. He saw things a little quicker than most players.”

Former Sabres center Derek Plante said Hawerchuk used to “manipulate me the way he wanted to” during practice.

“Just the little things you learned from him, how he did it and why he did it,” he said. “I’m like, ‘Oh, wow, that’s amazing, I never thought that, you know?’”

Hawerchuk saved some of his greatest exploits for the 1993 playoffs, scoring five goals and 14 points in eight games. He scored two points in each of the last six outings, helping the Sabres stun the Boston Bruins in a four-game sweep before falling to the Montreal Canadiens.

“He had God-given talent to play the game,” Hannan said. “But just as a person, for a guy that was a superstar and had great years in Winnipeg and stuff like that, he had an aura about him.”

One thought on “The quiet superstar: Sabres remember Dale Hawerchuk for humility, greatness”