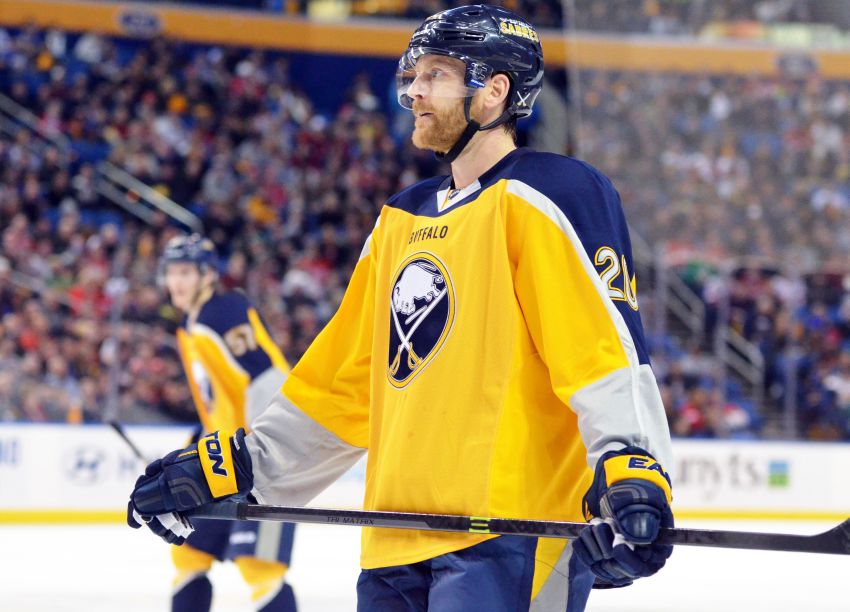 Henrik Tallinder believes the Sabres have been "jumping on the train a little bit more" with Ted Nolan. ©2013, Dan Hickling, Olean Times Herald

But the bottom-feeding club has been outscored 15-5 in four straight losses since beating Toronto. The Sabres, who have an NHL-low five wins and 11 points, are still really bad.

“I really liked the emotion of the first game, and everyone was expecting that,” Nolan said Monday inside the First Niagara Center. “And the second game we had emotion for two periods and it dropped off for a period. Third game, we started off really well and it tailed off. Fourth game, same thing. Fifth game, same thing.

Nolan spent much of Monday’s long practice working in the defensive zone, where the Sabres, having allowed 3.16 goals a game, are a mess. He wants his club to start playing more instinctively.

“We were a little too hesitant before,” Tallinder said. “(We watched) a lot of video. And I think Ron is a good coach, too. It’s not that. I just felt that all the guys were jumping on the train a little bit more with Ted.”

Nolan hasn’t been able to change one constant of this trying season, however. The Sabres often appear deflated after an opponent scores.

Despite the struggles, Nolan said the lines he’s been using will stay intact.

Tallinder, the Sabres’ elder statesman at 34 years old, on being awarded the assistant captaincy almost immediately following Nolan’s arrival: “That was a little bit of a surprise. You know what? I’m not going to change too much with an ‘A’ on my jersey. I am who I am. I’m going to lead. If people want to follow me, that’s fine. But I’m not going to change because I have that letter.”

Rochester winger Patrick Kaleta, who’s back in the AHL trying to develop a calmer style following a series of suspensions, will return from a four-game absence (lower body) Wednesday, according to the Democrat and Chronicle.

One thought on “Ted Nolan wants more emotion from struggling Sabres: ‘I don’t think we have too much faith in one another’”