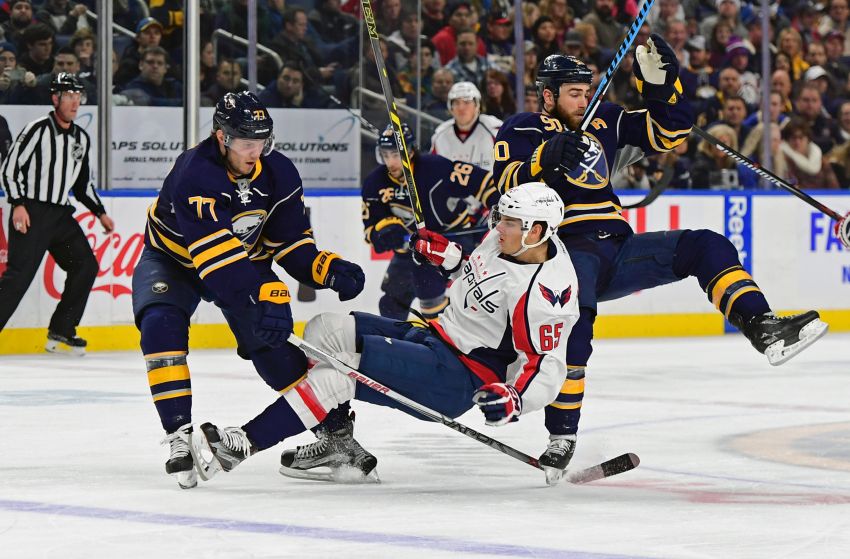 BUFFALO – After Friday’s disappointing 4-1 loss to Washington Capitals, the Sabres are 3-2-1 with Jack Eichel, their dynamic young star, back in the lineup.

Eichel’s presence, as their record indicates, has boosted Sabres a bit. They’ve played some entertaining games in the last two weeks, scoring goals and showcasing the ability to roar back late.

But even with Eichel and many of their injured regulars back – defensemen Josh Gorges and Dmitry Kulikov returned Friday – they’re still a flawed, wildly inconsistent team that appears to be destined for another playoff DNQ.

Fresh off Thursday’s exciting 4-3 overtime win against the Edmonton Oilers, the Sabres struggled against the Capitals, allowing two power-play goals en route to another boring loss at KeyBank Center.

“There wasn’t a ton in the game either way from either team,” Sabres coach Dan Bylsma said.

What happened against the Capitals?

“(A) lack of execution and puck management really is what it comes down to,” Sabres defenseman Jake McCabe said. “When we turn over pucks and we try to go up and down with these teams that are skilled like Washington, that’s not our brand of hockey. We grind teams down in our offensive zone. We’re not a rush team.”

Or, apparently, a team with strong penalty killing.

“We have become a little shell shocked the last few weeks,” Bylsma said.

You think? The team’s PK was one of the NHL’s strongest early, but the units have struggled recently, killing only 12 of the last 22 chances.

“We need a better effort finishing right now,” Sabres winger Marcus Foligno said. “It seems like we were kind of winging (it) right now on the power play. You can’t have that attitude.”

Sabres defenseman Cody Franson added: “It leads back to playing through some adversity right now. We had a good kill at the start of the year, we were doing a lot of the same things that we’re doing now.

“The small little details, just a matter of starts and stops, maybe playing certain situations a little more aggressive than others, even sometimes laying off when we should.”

But instead of finishing off the Sabres, the Capitals took three third-period penalties. Kyle Okposo’s power-play goal made it 2-1 at 12:03.

The Sabres’ league-worst offense has scored one goal or been shutout nine times at home, where they’re 5-6-3 this season.

Still, they generated some strong opportunities Friday before 18,234 fans. With about 3:30 left in the second period, Franson found Eichel alone in front of an open net for what looked to be a surefire goal.

But Eichel misfired, hitting the back of Washington goalie Philipp Grubauer’s far skate.

“I put it up on the board,” Bylsma said.

Okposo missed an open net earlier in the period.

“Those are the two guys you probably want the puck on their stick to have those opportunities,” Bylsma said.

Risto with the shot, Okposo with the goal on the rebound. pic.twitter.com/TGhTTEtkHx

One thought on “Special teams doom Sabres in loss to Capitals”