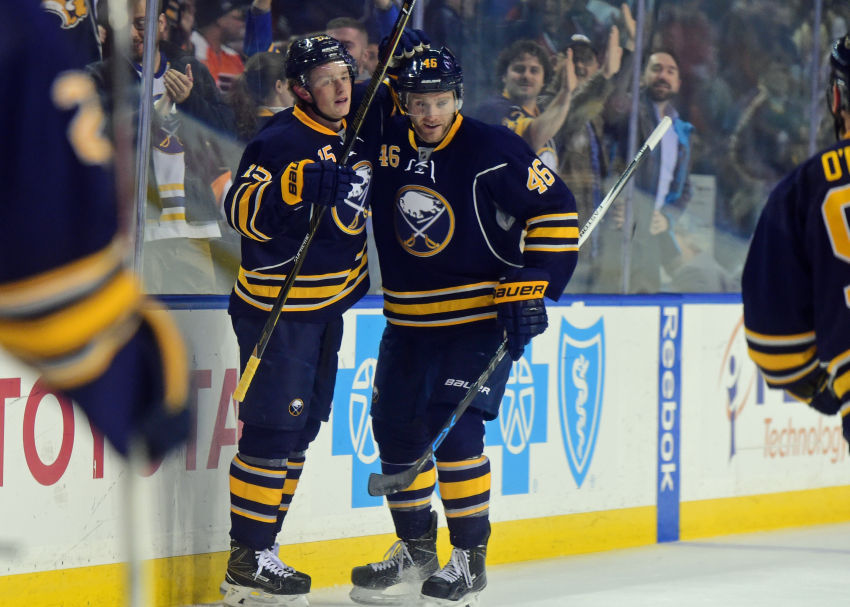 Jack Eichel (15), Cody Franson (46) and the rest of the Sabres have done a lot of celebrating recently. ©2015, Dan Hickling, Olean Times Herald

BUFFALO – Eighteen NHL teams, including nine in the Eastern Conference and four in the Atlantic Division, have more points than the Sabres’ 16. At 8-8, they’re one of 20 clubs at .500 or better.

On the surface, and without fully understanding their recent turbulent past, the Sabres’ start might look a bit pedestrian. But having won three straight games and six of eight, they’ve roared back into the playoff picture. In the last two weeks, the upstart Sabres have played their best and most significant stretch of games in years.

The Sabres’ 3-2 triumph Thursday in Florida was perhaps their most important victory in a few seasons. After they won 4-1 on Tuesday in Tampa Bay, his players knew they needed one more win to reach .500, Sabres coach Dan Bylsma said Friday.

“It is significant,” Bylsma said. “I know our guys were looking at it.”

So tonight against the San Jose Sharks inside the First Niagara Center the Sabres, fresh off consecutive 30th-place finishes, can own their first winning record since January 2013.

The Sabres have come a long way very quickly this season.

Clearly, the Sabres, who overhauled their lineup and hired a new coaching staff during the offseason, are learning to win. There were early signs when they performed well in some losses, outplaying and outshooting some opponents.

But with so many new faces and a new system, they needed some time.

“It took a while,” Sabres winger Marcus Foligno said. “I think that’s what we showed in some of our losses this year. We dominated games, we didn’t get the win. Now we’re dominating games and getting wins and vice versa. So I think it’s just getting familiar with all the guys.

“I think we have a great bunch of guys. The chemistry’s great. Everyone gets along with each other. That’s huge, so that translates on the ice.”

The understanding the coaches have passed to the players through teaching “has been amazing,” Foligno said.

“Everyone’s been soaking it up and spitting it up out there,” he said.

These days, the Sabres possess a strong belief they can triumph in any game.

The Sabres beat the Panthers despite getting outshot 38-19. They eked out a 3-2 win over Vancouver last Saturday when the Canucks outshot them 37-22. In between, they played a near-perfect road game in defeating Tampa Bay, ending a seven-game losing streak against the Lightning.

“We’ve been outshot in (two of the past three) games, but I don’t think … you would say, ‘Oh, we didn’t deserve to win that,’” Foligno said.

Foligno’s excited “because the mentality of our team has changed so much.”

“We’re in games, we’re positive throughout the whole game,” he said. “There’s a belief that we’re going to win games now. Not that there (wasn’t) before, but there’s a definite thing if we’re down a couple of goals, we’re going to come back and win. It’s great to be a part of this now where this team’s rolling in the right direction.”

Ennis added: “I think every day, every game like that we get the belief, confidence grows. So we just need more of that. Confidence is a huge part of this game.”

Notes: Bylsma on scratching gritty winger Nick Deslauriers, a player whose passion and talents he often lauds, on Thursday: “It is hard. I think he is and will be a big part of our team and how we play. … It wasn’t pleasant.” Deslauriers played every game last season. … The Sabres have beaten the Sharks eight straight games. The Sharks have only won once in Buffalo – a 5-1 victory Dec. 2, 2005 – in their 24-year history.