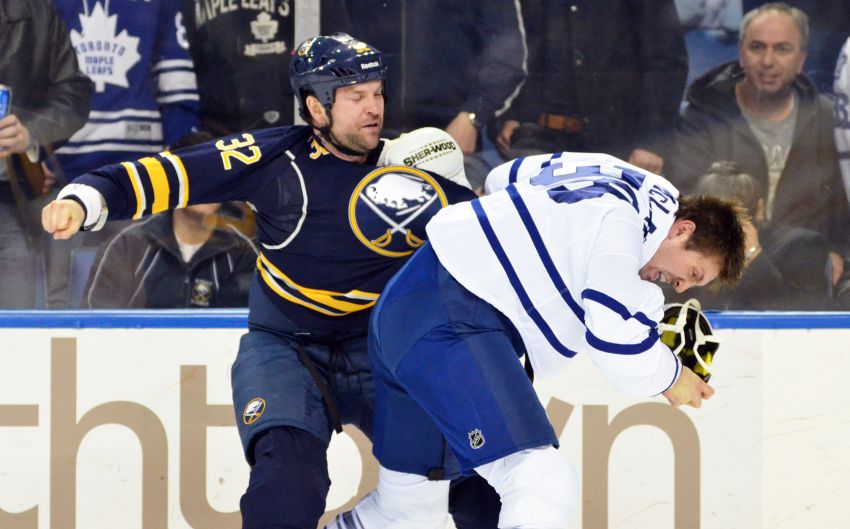 BUFFALO – Naturally, hulking Sabres tough guy John Scott was a little surprised to see Phil Kessel, one of the NHL’s most talented stars, lining up for a faceoff beside him Sunday in Toronto after the Maple Leafs’ Jamie Devane had just pummeled Corey Tropp in a gruesome scrap.

Watching Devane knockout and bloody Tropp, who gave up five inches to the 6-foot-5 fighter, infuriated the Sabres. Scott, who was already on the ice, figured Leafs coach Randy Carlyle would send out some muscle.

Instead, hoping to diffuse the situation, Carlyle sent skill over the boards.

“I think their coach kind of wanted to maybe downplay it,” Scott told a throng of reporters Monday inside the First Niagara Center. “But I was just doing my job.”

The 6-foot-8 Scott said he would’ve went after anyone who lined up beside him, so he told Kessel, who’s about eight inches shorter and 60 pounds lighter, “Phil, we’re going to have to go here, just to let you know.”

The massive melee in the Leafs’ 5-3 exhibition win inside the Air Canada Centre was still the talk of the hockey world Monday.

Officials had handed out a whopping 211 penalty minutes at the 10:01 mark of the third period.

“It’s a line brawl, everybody went, in Toronto,” said Miller, who clearly enjoyed his first NHL fight. Obviously, everybody’s going to be talking about it. Old time hockey, right? Your teammates are going, everybody is going. You got to go. Everybody on the ice did what they had to do. That’s part of the game.”

Kessel responded by ferociously whacking Scott with his stick as other Leafs mauled Scott. Kessel later gathered up his equipment and returned to spear Scott.

Scott seemed dismayed Carlyle, whose love of tough guys is well known, put Kessel out. Kessel received a match penalty and could be suspended.

“I think the last punch and driving his head into the ice wasn’t needed,” he said about Devane and Tropp. “We’re trying to stick up for our team and just build a tough mentality around here.”

Neither Scott nor Sabres coach Ron Rolston would speculate about any Toronto suspensions.

Rolston had been going with Scott throughout the game. The winger even assisted on Nikita Zadorov’s first-period goal, earning a rare point. He has only five in his 181-game career and hasn’t recorded one since Dec. 16, 2011.

At times, especially late last season, Scott has taken a regular shift. Still, the 30-year-old has heard cries he doesn’t belong in the NHL since leaving college.

“I’m tall, I’m big, I’m tough. It happens all the time. No one’s talking about the sick assist I had (Sunday),” he joked. “ … But it’s one of those things. Toronto has enforcers. Every team has enforcers.”

But both of Toronto’s, Frazer McLaren and Colton Orr, are hurt right now.

If a tough guy had been out there, “It would’ve been done with,” Scott said.

“There wouldn’t have been any brawl,” he said. “The goalies wouldn’t have fought. … It would’ve been two tough guys fighting it out like it’s supposed to be done.”

You can bet Toronto will dress more toughness for the teams’ Nov. 15 meeting in Buffalo.

“I’m sure there’s going to be some kind of retribution,” Scott said. “I’m sure their tough guys who weren’t in the lineup, Orr and McLaren, weren’t too happy with me. So we’ll deal with that come November.”

In other news, Rolston said winger Marcus Foligno (possible shoulder) is also being evaluated. Forward Cody McCormick has a “hand issue” but should be fine for Wednesday, he said. Both left Sunday’s game.

Tropp, who scored just before the fight, has a history of concussions. So does Miller.

“I don’t have any experience with (fighting), so I was definitely more defensive in that situation,” Miller said.

2 thoughts on “Sabres tough guy John Scott defends role in brawl: ‘I wasn’t going to try to hurt him’”