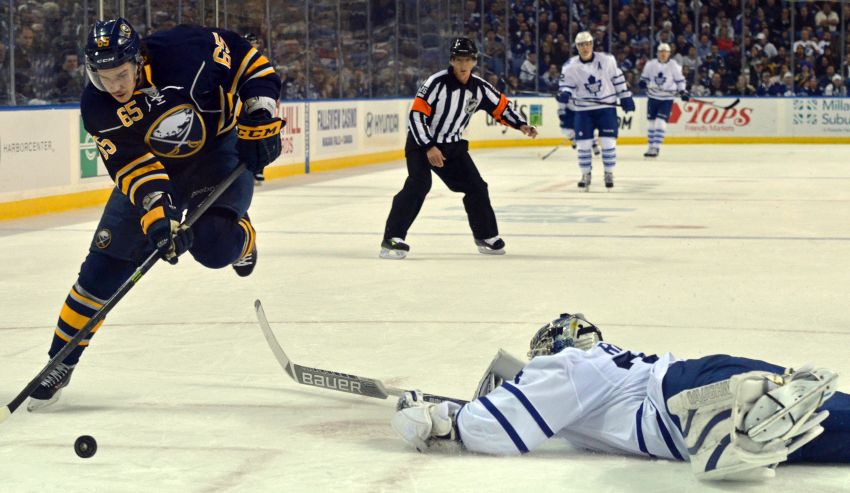 BUFFALO – For one night at least, the First Niagara Center felt like the old days. A raucous capacity crowd of 19,070 fans roared from start to finish Saturday. The Sabres buzzed up and down the ice all night against the hated Toronto Maple Leafs, scoring goals and creating chance after chance.

The Sabres’ rollicking 6-2 win, just their second regulation triumph this season and first at home, was wildly entertaining, high-octane hockey.

It was the best night in this building in years.

“It was awesome,” said Sabres winger Tyler Ennis, who had one goal and three points. “I can’t remember the last time we put up six goals. It felt great.”

Toward the end, Sabres fans, who were greatly outnumbered by the Toronto faithful, counted up the goals, demanding a seventh.

Sabres coach Ted Nolan added: “It was nice to see the smiles on the players’ faces.”

Early on, it looked like the Sabres could end their five-game losing streak.

The Sabres pounced on the Leafs at the get-go, jumping out to a 2-0 first-period lead. They pumped 11 shots on Leafs goalie James Reimer in the opening period. Remember, the Sabres had a franchise-low 10 all game in their 4-0 loss Oct. 28 in Toronto.

Ennis’ power-play goal opened the scoring at 15:40. Zemgus Girgensons followed short-handed at 18:33, scoring into an empty net after Brian Flynn beat Reimer to a loose puck in the right circle.

Drew Stafford made it 3-0 in the second period before Toronto’s David Clarkson scored. But Matt Moulson countered 16 seconds later.

Phil Kessel made it 4-2 shortly after, but goals from Tyler Myers, his first, and a nifty breakaway score from Girgensons buried the Leafs.

“We needed that one,” Stafford said. “I can’t remember the last time we won a game like that in regulation at home, especially against the Leafs.”

The Sabres had 22 goals all season entering the tilt.

“We doubled our input,” Nolan joked.

Incredibly, the Sabres are 14-1-1 in their last 16 home games against the Leafs.

By the end, a few of the remaining Toronto fans threw various items on the ice, including a jersey.