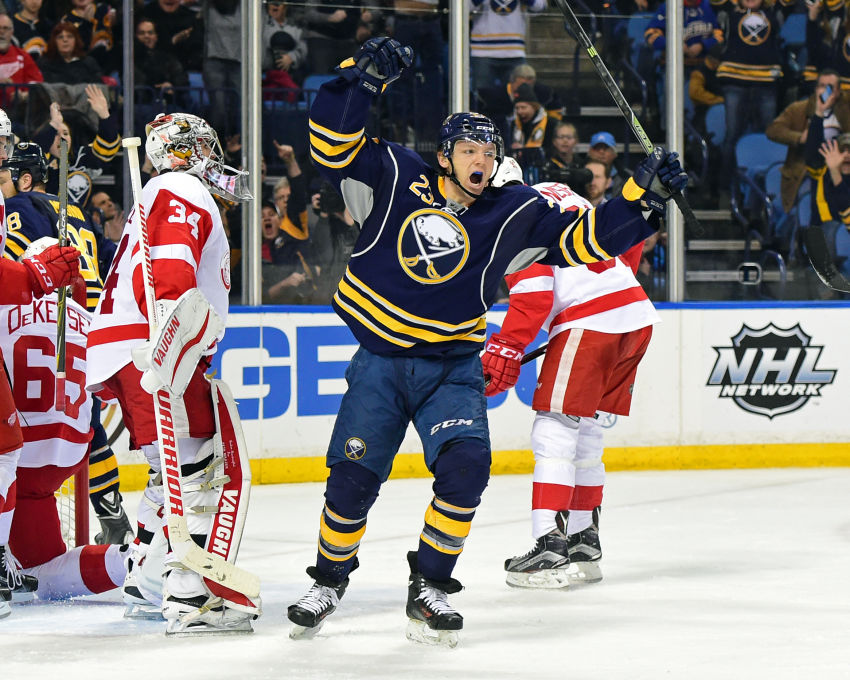 BUFFALO – Sabres winger Sam Reinhart doesn’t care how his tying power-play goal late in Saturday afternoon’s 4-3 loss to the Detroit Red Wings went in the net. The rookie only cares about scoring his first goal in 11 games.

Just before Detroit’s Tomas Nosek hit the puck into his own net 8:58 into the third period, Reinhart narrowly missed beating Petr Mrazek in front. Reinhart was credited with his ninth goal since he was the last Sabres player to touch the puck.

“That’s one I’ll take when it’s been a while,” Reinhart said inside the First Niagara Center following the Sabres’ fourth consecutive loss.

Reinhart, 20, roared into the Christmas break with four goals and eight points in 11 contests, the hottest stretch of his 48-game career. But he hadn’t scored since Dec. 7 and was pointless in his last five games.

“It’s tough not to get frustrated,” Reinhart said. “I mean, it’s a long year and you’re going to go through spurts like that where things aren’t quite going your way. The chances have been there, so it’s been made a little bit easier to stick with it. Hopefully, that opens things up for me.”

Sabres coach Dan Bylsma said prior to the game Reinhart had lost some of his intensity in recent outings.

“We’ve seen a little bit of a dip in his game, where the intensity level of his game has gone down a little bit coming off the break and the number of games we’ve played,” Bylsma said. “He’s also played a lot of minutes. He’s played upwards of 18-plus minutes on a nightly basis, and that’s been a lot for him. …

“That’s one of the things he’s improved greatly on this is year is his puck battles, his intensity level on the puck and at the puck. I think he has had a drop in that.”

Reinhart knew he had lost some of his jump.

“I think when I’m playing my best like I was right before Christmas, that’s the main reason why,” he said. “I think tonight I had a little bit more of that. I can definitely keep working on that.”

“I liked him a lot on the power play with the battle down low in the corners there and winning pucks,” he said.

Ennis, who absorbed a big hit Wednesday from Washington’s Alex Ovechkin, recently missed 14 games with an upper-body injury that is unrelated to his current one, Bylsma said.

In what was supposed to be a breakout season, Ennis has only three goals and 11 points in 23 games and hasn’t scored since Oct. 27, a 14-game stretch.

“He was just getting up to speed and getting back to the speed of the game and gets injured again,” Bylsma said. “It’s unfortunate. It feels like he hasn’t been able to get to where he needs to be effective for our team this year.”

Sabres defenseman Carlo Colaiacovo sat out his 11th straight game as a healthy scratch Saturday. The veteran doesn’t appear to be close to playing anytime soon, either.

When Mark Pysyk returns from a broken foot later this week, the Sabres will have eight defensemen, so someone else must also sit out.

“I like the way Mike Weber’s gone in for us and played, and I thought he’s played real well,” Bylsma said. “He’s gotten repeated games, it’s probably prevented Carlo from going in.”