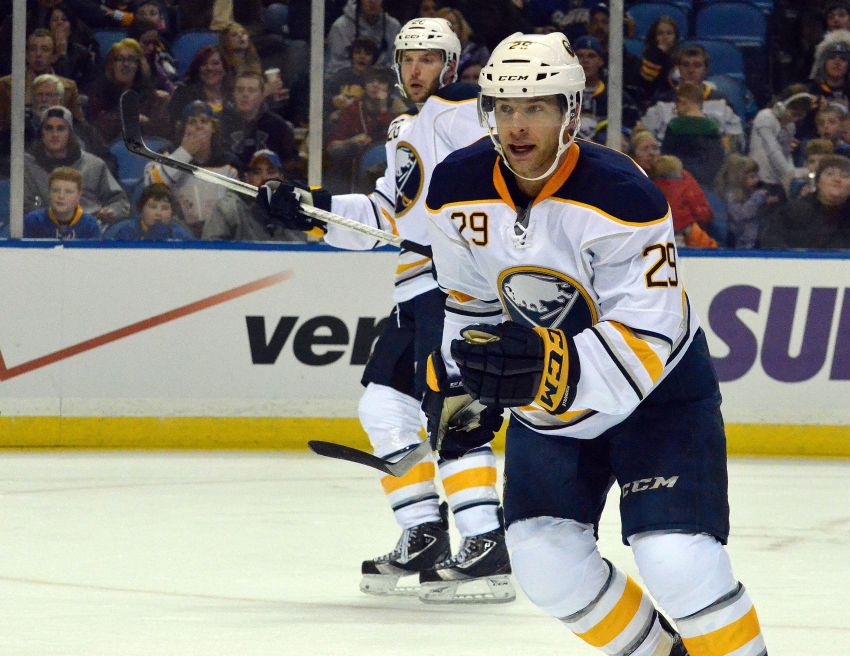 BUFFALO – Early in the second period of the Sabres’ 2-1 win Monday, Thomas Vanek knocked Nikolai Kulemin down in his own zone, grabbed the loose puck and zoomed down the left wing into Toronto territory on a three-on-two break.

Vanek then laid a perfect pass over to Jason Pominville, almost without looking, as he stopped at the top of the left circle. Cody Hodgson, meanwhile, was roaring to the crease with a defender, giving Pominville an open look at the net.

The winning goal showcased the supreme chemistry the trio has been sharing, especially Pominville and Vanek, teammates the last nine seasons.

“We both saw Cody going to the net, which … showed we both kind of read it the same way, that he should be open if everything goes the right way,” Vanek said Wednesday inside the First Niagara Center after the Sabres prepared for tonight’s tilt in Carolina against the Hurricanes.

So far, everything’s going the right way for the scorching combination, the NHL’s best early-season line. Vanek already has two goals and six points. Pominville has a goal and five points. Hodgson has two scores.

“The way they play the game makes it easy,” Hodgson said. “They make the smart plays. It’s not too complicated.”

Pominville and Vanek developed much of their chemistry last season, the first year they spent significant time as linemates.

They began 2011-12 dominating with Luke Adam as their center. Vanek compiled eight goals and 15 points in October. Pominville had five goals and 14 points.

The wingers performed like they had been together for years.

“We seem like we know where we’re at in certain situations,” Pominville said. “We kind of read the game the same way. We both like to make plays when plays are there. At the same time, we can shoot when we have an opportunity.”

Vanek believes “our games are similar but they’re not.”

What does that mean?

“I think they’re similar in the way we think the game more than anything,” he explained. “I think we see the ice a similar way, the open space, and that’s the biggest difference. When I pull up, I think he reads the same space that’s open that I read, which obviously makes it easier.”

Communication, of course, is vital. Pominville and Vanek sit next to each other all the time. They’re always talking.

“We’re in constant talk throughout the game,” Pominville said. “If we see something we like or we didn’t like, then we’ll let each other know. You have to be honest. If you’re on the same line, if you want to have success, you have to be able to communicate, whether it’s good or bad.”

Hodgson added: “It doesn’t matter where people come from or where they’re born. I think they just speak hockey. They communicate on the ice. … (They) just know where certain plays kind of develop, where they’re going to be.

“My job is kind of to just make sure I compliment that and be in support positions. I know the creativity they have together is pretty special.”

Hodgson’s presence at center has been huge. Adam was eventually moved off the line last season and went back to the minors. Pominville went beside Ville Leino and Derek Roy late in the year. Vanek skated with Hodgson and Corey Tropp.

Pominville finished the season with 30 goals and 73 points. Vanek finished with 26 goals and 61 points as some undisclosed injuries slowed him much of the second half.

“I’ve always liked to know who you’re going to play with and most times stick to it,” Pominville said. “I think throughout last year we were fortunate that me and Thomas stayed together. …  So at least we had two guys who kind of were able to figure each other out. But if you have three, it helps even more.”

Vanek traces much of this season’s start to the brief time he spent with Hodgson last year.

“Sometimes it takes a while to score chemistry. Sometimes you just have it,” Vanek said. “ … Right away you could see (Hodgson) was a smart player and I meshed with him pretty well.”

With a short training camp this season following the NHL lockout, putting Pominville and Vanek back together was a no-brainer for Ruff.

“I think we were able to carry some momentum,” Pominville said. “Me and Thomas have the chemistry. You add a Hodge, who’s been playing throughout the lockout (in Rochester). He’s excited about the opportunity. … It’s been fun.”

One thought on “Sabres’ Pominville, Vanek proving to be dynamic wing combination”