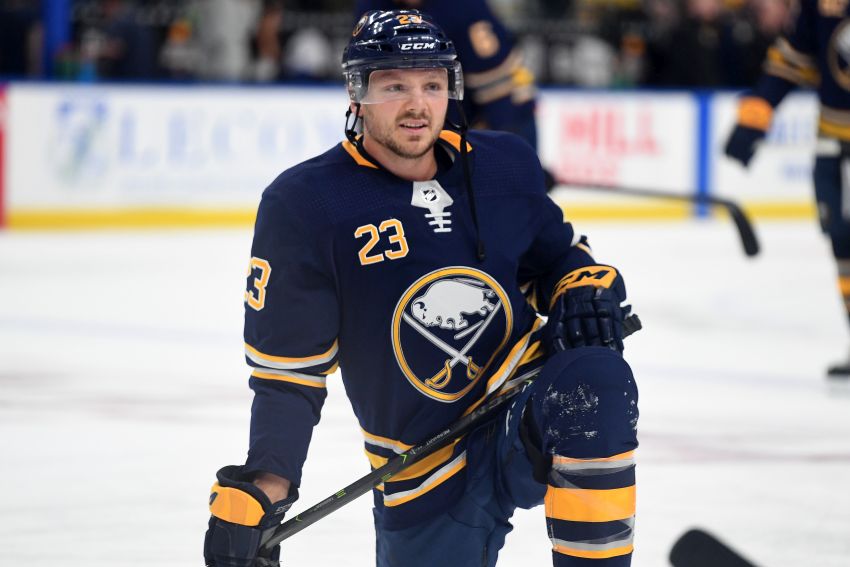 Of course, Reinhart, 22, hadn’t exactly experienced a rollicking October before his first goal this season tied Thursday’s contest at 13:07 into the third period. So far, he has six points.

Fresh off a 25-goal, 50-point campaign in which he scored 18 goals and 37 points over the final 38 games, the first few weeks of his fourth NHL season have been a bit disappointing.

“In our last couple games when that line was put together, they’ve had some really quality offensive zone time,” Housley said Thursday morning inside KeyBank Center. “(Reinhart’s) had some really good looks, which in turn, if he keeps getting, they’re going to fall in.

“I think Shears passed it through about three people,” McCabe said. “It’s a big goal. I’m happy for Sammy, he’s always in front of the net. He could’ve easily had five by now, the post hasn’t been his friend.”

Reinhart began the season playing beside Jack Eichel, his regular center. Sobotka, whose career-high point total is just 33, might seem like an odd choice to pivot Reinhart. But the new linemates meshed right away, generating offensive zone time over the weekend.

“We’ve all experienced a little bit more zone time,” Reinhart said. “I think that’s translated to everyone. Everyone’s kind of relaxing a little bit, getting to know their new linemates, and I think a big part of our game is our offensive zone time.

“We’re just keeping the puck on our stick a little bit longer and taking advantage of that time and space we’re creating for each other.”

Housley hinted winger Tage Thompson, a healthy scratch Thursday for the third straight game, could be sent to the AHL soon. Thompson, 20, has zero points in seven games.

The Sabres play a road game Saturday in Columbus. The Rochester Americans, meanwhile, play tonight and Saturday at home.

The Sabres only held one morning skate while going 3-2 on their recent five-game road trip. Circumstances – two afternoon games and a 6 p.m. start – played a factor in that. Housley also had a meeting instead of a skate last Thursday in San Jose.

The Sabres have examined how they’ve performed without a morning skate.

“Most of our wins we haven’t had a pregame skate,” Housley said. “The schedule’s going to dictate that.”

Housley held a skate Thursday so the Sabres, who hadn’t played at home since Oct. 11, could get back in a routine.