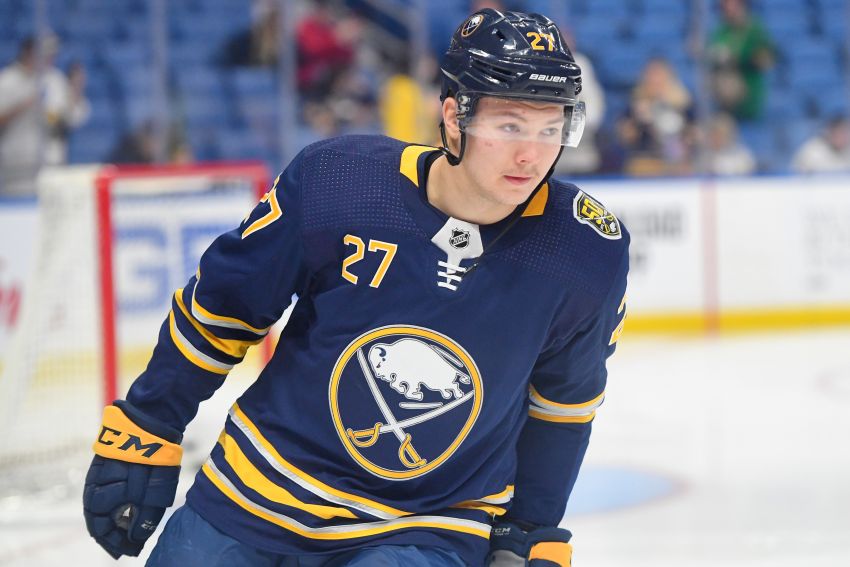 BUFFALO – Curtis Lazar loves playing center. After thriving back at his natural position a year ago with the Stockton Heat, the Calgary Flames’ AHL affiliate, he talked to the Sabres during free agency about remaining there.

“All my conversations during the summer said I’d be down the middle, and then I come to camp and played strictly wing,” said Lazar, who signed a one-year, $700,000 contract July 1. “I’m honestly fine with whatever. I think it shows, though, that I do have that (comfort) down the middle. I feel like I can see the ice a lot better and my reads are there.”

The affable Lazar, 24, might be fine with playing wherever, but he clearly prefers pivoting a line. After skating at wing all season, he switched back to center Dec. 11 with the Rochester Americans.

In his two recalls since then, the Sabres have kept Lazar in the middle.

His comfort keeps growing. In Sunday’s 3-2 loss to the Boston Bruins, he scored his second goal in 10 games with the Sabres this season and skated 14 minutes, 14 seconds.

It was the second time in four games Lazar surpassed the 14-minute mark. In his previous 109 NHL outings, the former first-round pick played more than 14 minutes just twice.

In the first period of Tuesday’s 6-4 loss to the Tampa Bay Lightning, Lazar jumped off the bench and intercepted defenseman Ryan McDonagh’s pass before quickly feeding winger Conor Sheary, who scored with 57 seconds left.

“I wanted to be at center so I could kind of control the play a little bit more, control the puck, take off that way,” Lazar said inside KeyBank Center. “I think that was a big part of it, kind of reestablishing my game down the middle, having the chance to do it at the NHL level and seeing the results, it feels good.

“That doesn’t mean I can’t play wing anymore. I just think that I was thinking a little too much, I was a little antsy and trying to do too much in the beginning of the year.”

Lazar, who made only one appearance with Calgary last season, said things are “starting to slow down for me.”

“I’m starting to see plays and make reads,” he said. “I’ve done a lot of work with (assistant coach) Donny Granato in the video room, just kind of identifying areas of games that I can grow. But the confidence (is) rising.

“Scoring a goal obviously helps. But also the role I’m being put in, the responsibility I’m getting, the coaches trust me in key situations and I’m embracing that.”

He added: “He understood the role he needs to take on to be a National Hockey League player.”

To make room for Smith, who made his NHL debut, the Sabres scratched forward Evan Rodrigues.

Rodrigues has struggled all season, compiling zero goals and three assists in 24 games. He has mustered just one point in his last 15 contests.

Amerks coach Chris Taylor has been named coach of the North Division for the AHL All-Star Classic on Jan. 27 in Ontario, Calif.

The 44 points the first-place Amerks earned through the first 30 games this season clinched the honor.

Taylor, 47, spent the first two months of the season subbing as an assistant coach in Buffalo for Granato, who was recovering from pneumonia.