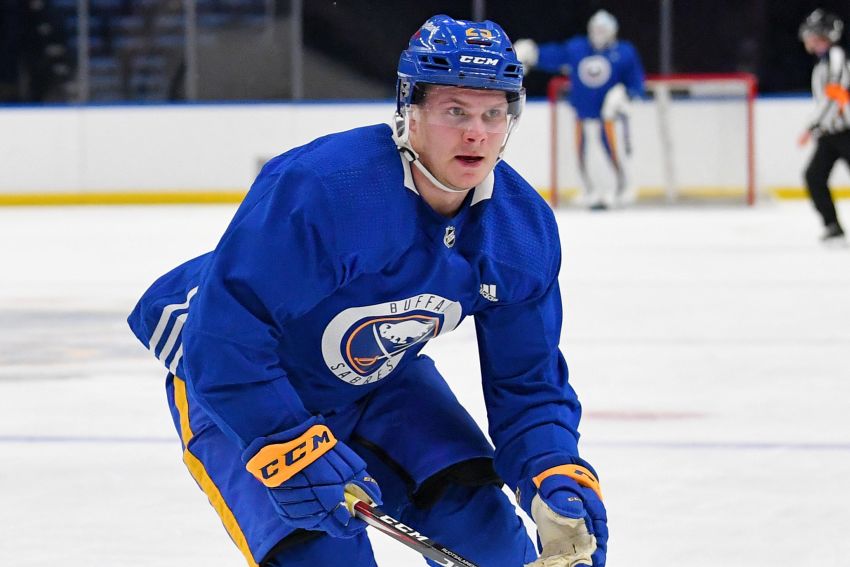 Buffalo Sabres rookie Arttu Ruotsalainen said when linemate Dylan Cozens delivered a short, soft pass to him in the right circle Sunday afternoon, he simply closed his eyes and shot the puck.

Ruotsalainen, 23, possesses a dynamic shot. He was waiting in the middle of the circle teed up waiting for Cozens’ feed, so he got everything on it.

“That’s a heck of a shot,” Sabres winger Kyle Okposo said on a Zoom call. “Great play by Coz, so it’s been awesome to play with him for a couple games.”

The 5-foot-9, 185-pound Ruotsalainen has quickly acclimated to North American hockey this season after spending his entire career in Finland. He played only 13 games with the Rochester Americans before earning his first opportunity with the Sabres.

Having spent six seasons in Liiga, Finland’s top pro circuit, Ruotsalainen arrived in Buffalo more seasoned than most rookies. He scored a league-high 16 goals in 19 games earlier this season for Ilves.

“You can tell that he’s played professional hockey,” Okposo said. “He does the little things right, he stays on top of people and all of the things that kind of you need to do really well in order to play in this league. So the learning curve with that is going to be minimal for him and (he’s) definitely strong on his skates and very smart.”

Ruotsalainen, who scored five goals and 13 points in the AHL, said his comfort increased in his second appearance.

“I felt like today after the first period I was feeling pretty good and confident on the ice,” he said.

Cozens, 20, skated 15 minutes against the Flyers. He only returned to practice Saturday.

“It’s a tough game for Dylan,” Granato said. “You could see that it was not easy for him because he hasn’t played and he’s jumping in a lineup without a lot of practice reps. So I was gauging that on the bench. I didn’t want to give him too much or put him in too much of a situation because he’s still wasn’t feeling himself.”

“He found ways, even though it didn’t look like he felt as good as he would want to, to contribute and battle,” Granato said.

Granato said the trade deadline, which hits at 3 p.m., did not distract the Sabres.

The Sabres have today off before Tuesday’s road game against the Boston Bruins.

Granato said prior to the game that forward Drake Caggiula, who was claimed on waivers Friday, won’t join the Sabres in the next four days.

Notes: The Sabres scratched winger Taylor Hall, who will likely be traded today, for the fourth straight game. … Reinhart has scored 11 of his 14 goals this season on the road. … Goalie Linus Ullmark made 40 saves. … Matt Irwin, who played winger Friday, moved back to the blue Sunday because the Sabres traded defenseman Brandon Montour to the Florida Panthers on Saturday in exchange for a third-round pick in 2021. The Sabres now have nine selections in this year’s draft.