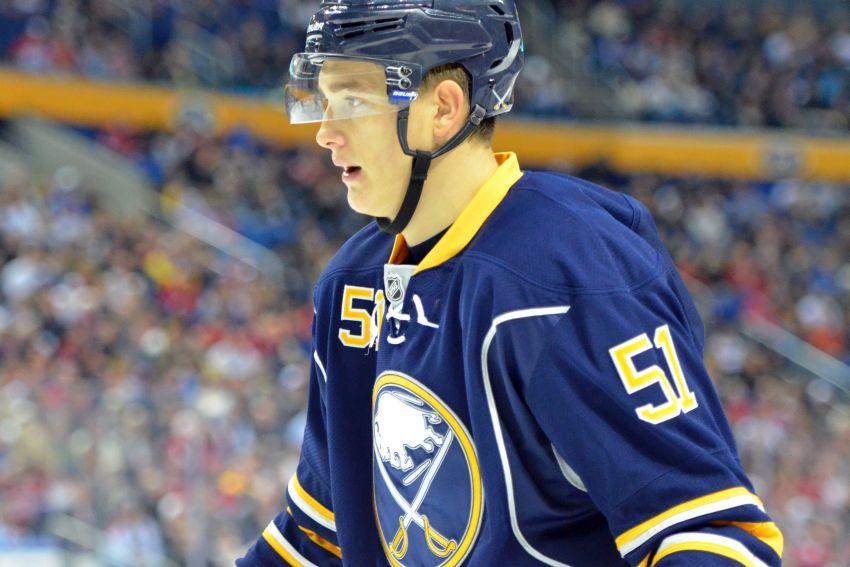 BUFFALO – It went on for weeks. Each day, 19-year-old Nikita Zadorov, the eighth defenseman most of this season, asked Sabres coach Ted Nolan if he would play.

“He asked me every day,” Nolan said Wednesday prior to the Sabres’ 2-1 shootout loss to the Montreal Canadiens inside the First Niagara Center.

Finally, Nolan gave his assistant coaches a message: “Tell him I’ll tell him when he’s in.”

After sitting the first seven games and 11 of the opening 12, Zadorov has played the last two contests, his first regular NHL action in a year.

“That just showed you his youth,” Nolan said about Zadorov asking him to play. “He didn’t do it to be obnoxious; he just did it because he truly wanted to be in every day.”

Now that he’s dressing, Zadorov asks Nolan for playing time from the bench. The Russian wanted to skate on the power play in Sunday’s 3-2 shootout win against Detroit, his first game since Oct. 23.

“He looked at me and started laughing because I wanted to go on the five-on-three,” Zadorov said about Nolan. “I played five-on-three a lot last year, so I tried to maybe look at him, maybe he could see that I’m ready, just put me in, try to for 20 seconds. He said something like, ‘We’ll see next time.’”

Zadorov could leave Buffalo any day. The Sabres have essentially been stashing the No. 16 pick in 2013 on their roster.

Since Zadorov has no release from his Russian club, the Sabres can’t send him back to junior without losing control of him for the rest of the season. Sabres general manager Tim Murray said Friday he could decide Zadorov’s future “tomorrow” or in “three weeks.”

Nolan has seen steady improvement from Zadorov recently, so he played him Sunday.

“I liked his game,” Nolan said. “One thing about Nikita, he’s a very highly intelligent player. The only thing with him is his youth and wanting to do too much and expecting things to come easy to him like they did the majority of his young career. Here, you’re playing with men. You have to make sure those decisions are much quicker. But his enthusiasm and his love for the game is certainly contagious.”

Waiting for a resolution hasn’t been difficult, Zadorov said. He knows most teenagers would trade places with him.

The Sabres can play Zadorov, who has skated beside Tyson Strachan, nine times before his contract kicks in. If he keeps dressing, Nov. 18 against San Jose would be his ninth game.

Zadorov believes he will keep developing if he goes back to the Ontario Hockey League’s London Knights.

“For sure, I can be better every year, everywhere,” he said. “It depends which league that I’m going to improve more.”

To Nolan, it’s no big deal.