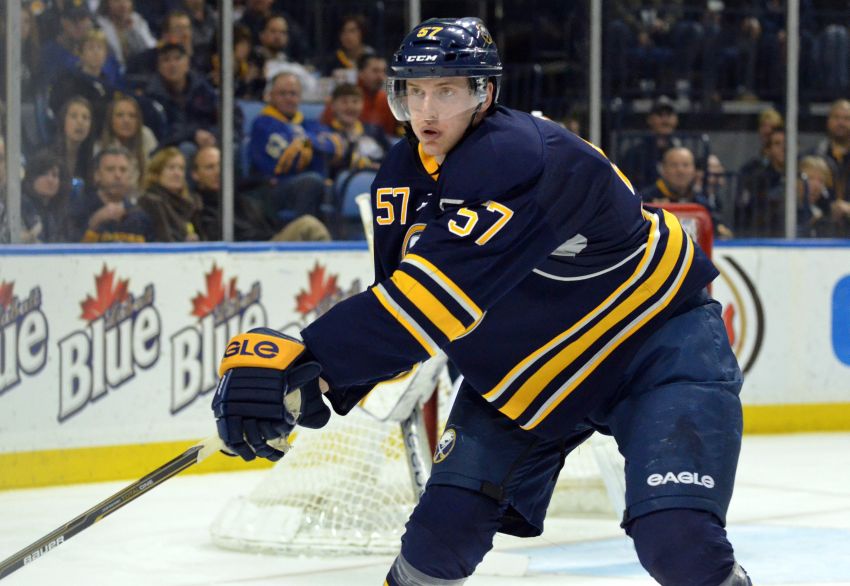 BUFFALO – Sabres defenseman Tyler Myers said the season-ending hairline fracture he suffered in his left leg April 11 “could’ve been a blessing in disguise.”

The injury allowed the 23-year-old to spend a few weeks working with the team’s strength and conditioning staff.

“(We) just had a lot of talks about what was expected, what was needed,” Myers said Saturday as the Sabres cleaned out their lockers inside the First Niagara Center. “It’s just more preparation going into the offseason.”

Myers, 6-foot-8 and 227 pounds, wasn’t prepared well for this season. While he offers few details, it’s widely known he reported to January’s abbreviated training camp out of shape.

Remember, Myers spent much of the NHL lockout playing in Austria.

He knows conditioning must improve for a full 82-game schedule in 2013-14. He plans to work with a trainer at home in Canada this offseason and come back to Buffalo a few times to work with the team’s staff.

“Skating’s a big part of my game. I don’t want gaining weight to affect that. So … diet is going to be a really big thing for me.”

Next season could be a make-or-break campaign for Myers, who was supposed to be contending for a Norris Trophy at this stage of his career.

Instead, he struggled most of the season, even getting scratched twice. Myers had three goals, eight points and a minus-8 rating in 39 games.

How difficult is it for Myers to hear he’s regressing and not the same player who won the Calder Trophy three years ago?

“Ah, it’s only natural to hear things like that with the way things have gone, especially this year,” Myers said. “I’ll be the first to admit I definitely need to turn things around, get back to that path of improving, working on the things have made me successful. It’s just a matter of working that much harder this offseason.”

Still, for all his struggles, interim Sabres coach Ron Rolston kept giving Myers big minutes down the stretch and lauding his play.

“It hurt at the time,” Myers said. “Right when it happened, I think I was more focused on killing off the penalty. I didn’t really think about it too much. In between periods it was pretty sore, but I just thought it was a really bad bone bruise. I started to feel it a little bit more and more as the game went on.”

“Even after the game I still thought it was going to be a really bad bone bruise,” he said. “But I ended up getting an X-ray, and it didn’t turn out the way I wanted it to.”

Neither did Myers’ season.

“The first 20-some games I felt great,” Vanek said. “Then I got hit by a couple of (Christian Ehrhoff’s) nice little ‘wrist shots’ and that banged me up a little bit. Then I had an ab injury and that’s the first time I ever had that. It’s amazing how much you actually use that muscle and it affected me for a good while.”

Vanek said he felt “great for the last 10 days” and “it showed in my game again.” He had four goals and eight points in the last six games.

What can Vanek do to avoid injuries?

“I don’t know,” he said. “I play in front (of the net). Maybe I can get better getting out of the way faster. I’m getting hit by slap shots in the stomach and the hip. I don’t think there’s too much I can do to work out unless I gain an extra 60 pounds to get some extra cushion in that area.”

Vanek is playing for his native Austrian at the upcoming world hockey championship.

Meanwhile, backup goalie Jhonas Enroth said he’s on the Swedish entry, according to reports at home, although he hasn’t been informed. He would accept an invitation.

Notes: In a letter season-ticket holders received Friday, which was also Fan Appreciation Night, the Sabres announced they are raising prices 4 percent across the board. … Sabres president Ted Black and general manager Darcy Regier plan to meet with the media Monday.