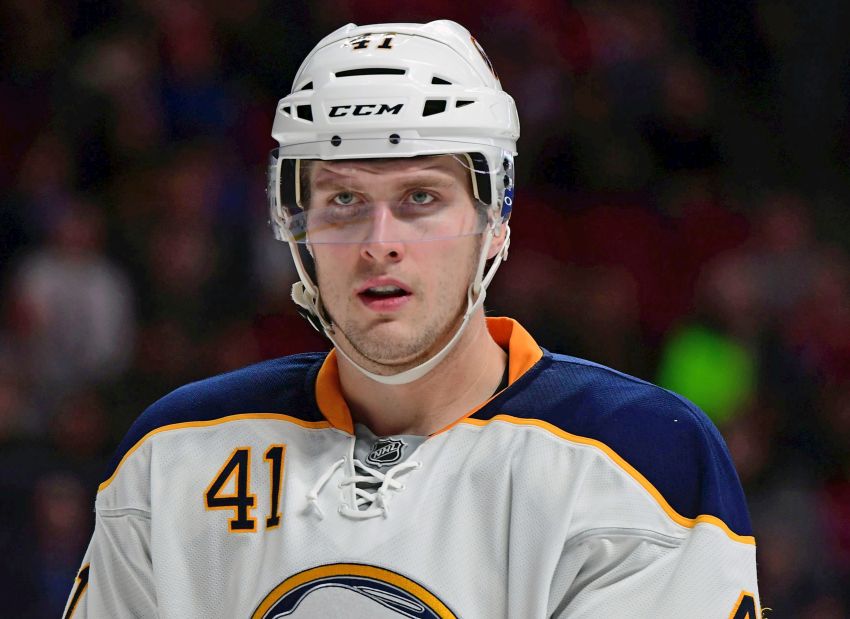 Falk, of course, wanted to play badly. But the one-year contract extension the journeyman signed Feb. 6 softened the blow of leaving the lineup following more than three months of near-regular duty.

“It does definitely makes things a little bit easier when your out of the lineup, just to have that in the back of your mind that there’s a bit of stability there,” Falk said prior to returning for Sunday’s 4-3 loss to the Penguins at PPG Paints Arena.

The Sabres gave Falk, a quiet offseason addition, another contract because he consistently provided strong depth as the injuries ravaged the blue line.

Then the defense corps got healthy, leaving Falk the odd man out.

But with defenseman Dmitry Kulikov sidelined with an upper-body injury Sunday, Falk played his first game since Feb. 16.

“You just try to stay on top of things,” Falk said of sitting out. “I’ve been in this situation before, where I’ve been out an extended period of time.”

With so many defense injuries, Falk, who started the season in the AHL, played 41 of 45 games before leaving the lineup. He played a career-high 47 games with Minnesota in 2011-12.

“It’s been a few years since I was able to ride a groove like this,” Falk said. “I’ve had some stretches in areas with different teams. They didn’t really take off like I would’ve liked them to.”

Bylsma said learning how to handle being a depth player has been “a big part of (Falk’s) maturation as an NHL player.:

For years, as Sidney Crosby kept producing Hall of Fame numbers despite battling a concussion that threatened to derail his career, Bylsma heard the same questions about the Penguins superstar.

Crosby has an NHL-high 34 goals and 69 points in 58 games this season entering Sunday.

Bylsma, who’s in his second season coaching the Sabres, on the progress his seventh-place team has made this season:

Former Sabres defenseman Chad Ruhwedel, who played 33 games with Buffalo over four seasons, made his 19th appearance for the Penguins.

“I had a good experience in Buffalo,” said Ruhwedel, who signed as a college free agent late in 2012-13. “The team had a couple of rough seasons when I was there, which wasn’t the most fun. But I’m very grateful for them giving me my first NHL opportunity.”

Ruhwedel signed a one-year, two-way contract with Pittsburgh in July. He began the season in the AHL.