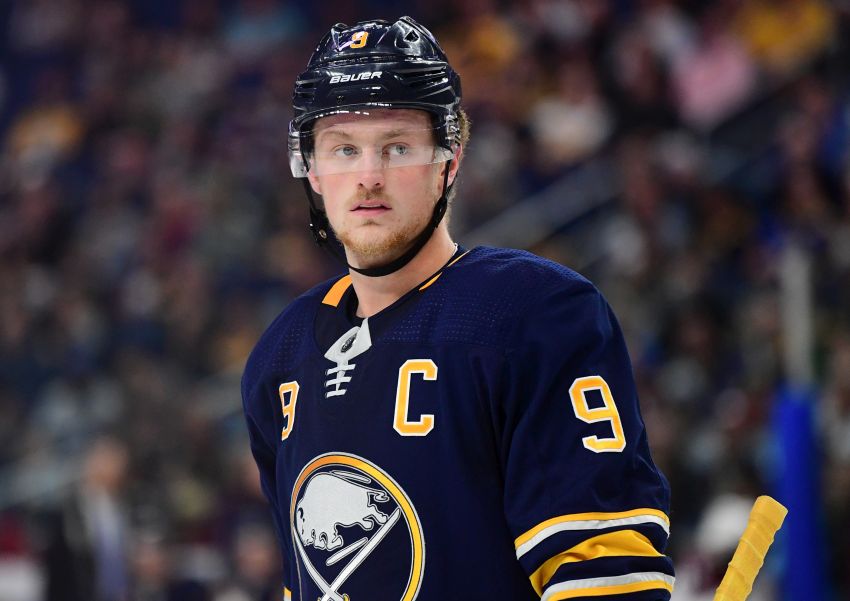 Through the first 15 contests, Eichel has scored a team-leading 17 points. At his current pace, he would have 93 points over a full season, the most since Daniel Briere had 95 in 2006-07.

But despite his strong offensive output, Eichel hasn’t done much goal scoring, at least by his standards. The center has scored just one goal in the last 12 games and only four overall entering tonight’s road tilt against the Montreal Canadiens.

Of course, Eichel, 22, isn’t exactly fretting. After all, he’s producing offense. As long as the Sabres are scoring goals, he said he’s excited.

“I love when other guys score, too,” Eichel said Wednesday inside KeyBank Center. “I don’t care if I’m scoring, if someone else is scoring. …

“I’m not looking at it like, ‘Oh, I have this many (goals),’ whatever. (It’s) however I can try to help this team win, whether it’s scoring goals or setting other guys up.”

Eichel, who averaged 24 goals over his first three seasons, said he considers himself “a pass-first, distributor guy.”

Still, Eichel acknowledged he “probably could be more selfish at times.” He possesses a lethal wrist shot and one-timer. He knows the Sabres signed him to an eight-year, $80 million contract extension to also score goals.

“I want to score goals because that’s who I am and I want to start finding the back of the net more,” said Eichel, who utilized his wicked one-timer to score his last goal Oct. 30. “I think it’ll help our team as well. I think I’ve had a couple opportunities in situations to score some goals that might’ve helped our team, but I’m not losing sleep at night because I have five goals right now.

“Should I have more? Yeah. Have I had my opportunities? Yeah. I’ll start burying them.”

Sabres coach Phil Housley wants Eichel to shoot more often. So far, he has averaged 3.9 shots on goal a game this season, up from 3.7 a year ago. His shooting percentage is just 6.8, down from 10.2 last season.

So how does a playmaker get rid of his penchant for passing first?

“It’s just a matter of repetitions, getting the repetition of shooting pucks, and then when you get in those areas, it’ll come naturally for you,” Housley said. “I feel that Jack has got such a terrific shot, you saw that one against Calgary (on Oct. 30), his one-timer. I would like to see him shoot more pucks when it’s time to shoot the puck.”

But it can be hard to shoot the puck when your linemates are converting so many of your adroit passes into goals.

When the Sabres acquired Skinner, a three-time 30-goal scorer, from the Carolina Hurricanes on Aug. 2, many observers believed playing beside Eichel could elevate his game an extra level.

So far, Skinner has already scored nine goals and 16 points, putting him on pace for a whopping 49 goals and 87 points. Eichel has quickly learned Skinner’s dogged pursuit of the puck – he forechecks and backchecks ferociously – buoys his success.

“Something that stood out most, I feel like the puck finds him,” Eichel said. “Whether he’s forechecking or backchecking on a guy, he strips a lot of people of pucks, gets the puck back in situations.”

While Housley knows the line has performed splendidly since he put it together last month, he doesn’t want to heap too much praise on the players yet.

“The way they’ve played in a short amount of time, they’ve earned the right to be praised, right?” Housley said. “But an 82-game schedule, it gets to be a grind. … We can’t get ahead of ourselves, we just got to stay in the moment right now.”