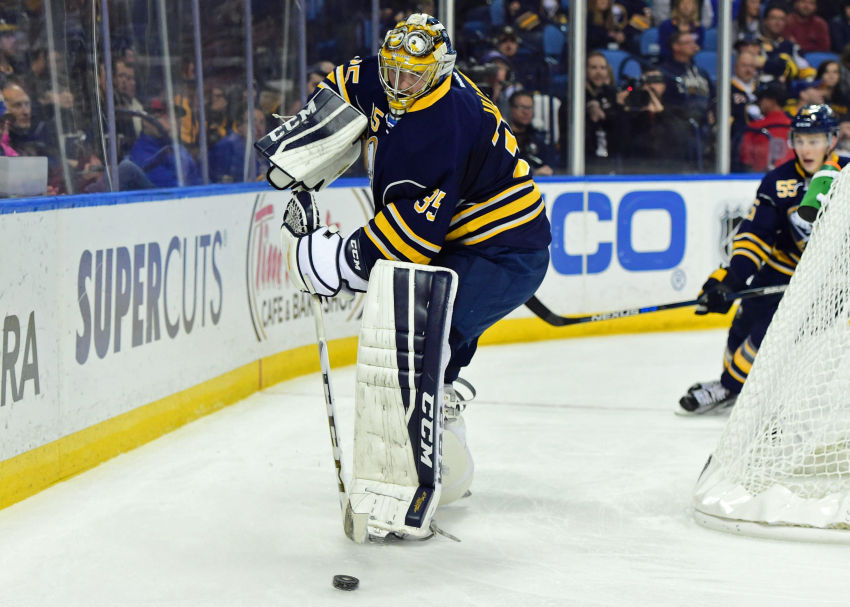 BUFFALO – Linus Ullmark’s spirited celebration, which has quickly become a regular occurrence when the final horn signals another win for the Sabres goalie, wasn’t premeditated.

When Ullmark notched his first NHL victory Oct. 30, he excitedly got on one knee and pumped his arm low after a 27-save performance in a 3-1 win against Philadelphia. The Swede, 22, never really planned to do it again, but his next three wins were all one-goal triumphs.

The rookie couldn’t help himself.

“Every game has been so tight so you are just exploding (with) emotions right afterwards,” Ullmark said Monday after the Sabres prepared for tonight’s home tilt against Lindy Ruff’s Dallas Stars.

Ullmark’s last outing, a 36 save-performance in Thursday’s 3-2 win in Florida, might’ve been his best NHL game.

Bylsma has split the action between Ullmark and Johnson the last four games, quickly developing a strong tandem. After Johnson made 31 saves, including an incredible diving stop on Tyler Johnson, in a 4-1 win in last Tuesday in Tampa Bay, Bylsma used Ullmark.

“They’ve both really had to deal with that situation,” Bylsma said. “Chad may have been disappointed he wasn’t going against Florida and he stepped back into the net last game and did a great job.”

A starter hasn’t been named for the Stars, the NHL’s highest-scoring club.

Johnson, a career backup, and Ullmark, a neophyte in his first North American season, are fine with sharing the net.

“You always want to play every game that you get, but it’s also a good thing that you’re rotating, keeping you fresh all the time so you’re not going at it too much,” Ullmark said. “You can have a really hard time if you’re facing 50 shots in the net to go on the next day. It’s good to have two goalies that are alternating. He can step up and play his best.”

Johnson, 29, has played some of his best hockey recently, posting a .959 save percentage in his last three appearances. He hasn’t allowed a five-on-five even-strength goal since Oct. 29, a stretch of 191 minutes, 51 seconds.

“I think nowadays it works,” Johnson said about goalie tandems. “You give guys a lot of rest and (it) allows you to prepare.”

Johnson subbed well for injured starter Robin Lehner most of October before looking shaky in a 7-2 loss to Montreal on Oct. 23. Ullmark started his first game the next night, sat out two and then played four straight.

Early on, Johnson wasn’t rewarded with wins or good numbers.

“I wasn’t getting results, but I think when I look at the games, regardless of the results or anything like that, I was playing good hockey up until the Montreal game,” Johnson said.

Naturally, stronger team play has helped the goalies. The Sabres, despite some hiccups in the last 10 days, play as a more cohesive unit these days than they did a month ago.

“I think it’s just we’ve found that groove defensively as a whole, which obviously for a goalie makes a big difference, especially statistically it helps,” Johnson said. “I think that’s probably the biggest thing.”

Ullmark added: “They’re doing everything good. They’re blocking shots, they’re taking away the rebounds, (keeping) the shots away from us.”

Still, Ullmark has faced plenty of shots. He has 75 saves in his last two outings. The poise he keeps showcasing has earned praise from teammates.

Ullmark said that calm, cool demeanor comes from embracing a “no worries” approach to the game. A song from the 1994 movie “The Lion King” – ‘Hakuna Matata,’ a Swahili phrase – inspires him.

“I used to say ‘no worries,’ kind of what my motto is,” Ullmark said. “Hakuna Matata. Awesome movie, one of my favorites. …

“You can’t just dwell on the past. Everything’s going to be all right in the end. If it’s not going well right now, it’s going to be better in the future, you never know. That’s why you can’t take anything for granted.”